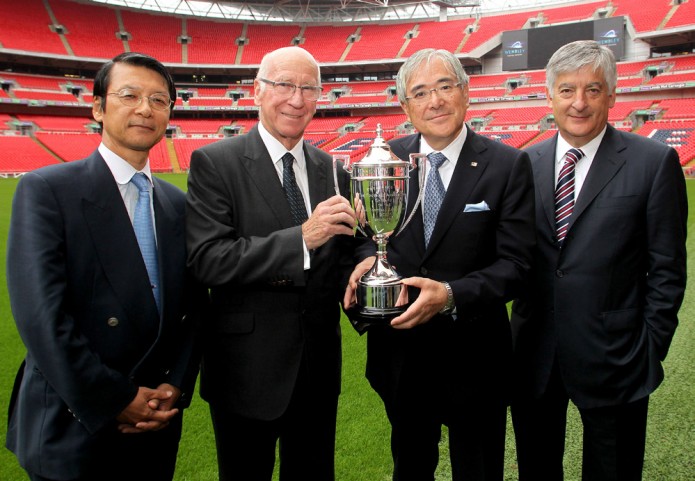 English Football Association (FA) Chairman David Bernstein presented his Japanese counterpart, Junji Ogura, with a trophy modelled on the cup originally given by the FA to Japan in 1919. The event, which took place on 23 August at Wembley Stadium, is part of a year-long celebration organised by the Japan Football Association (JFA) to mark its 90th year.

The Japanese FA Silver Cup (equivalent to the English FA Cup) was originally presented by the Football Association of Japan (as the JFA was known at the time), which was established in 1921. Representing a token of friendship, the cup was awarded at the request of Lord Balfour, the then-British foreign secretary who hoped to promote the game here. It was the trophy in the first Japan National Football Championship, held in November that year. During World War II, the cup was taken by the Japanese government and reportedly melted down by the nation’s military. The replica is made of sterling silver and was crafted by Thomas Lyte of London.

Bernstein said: “Not only did the original trophy trigger the establishment of the Japan Football Association, it also began a longstanding and rewarding relationship between our two associations. We look forward to our continued friendship with the JFA, both on and off the pitch”.

Football has become increasingly popular in recent years in Japan. The country co-hosted the FIFA World Cup with the Republic of Korea in 2002, has a flourishing professional league (the J. League) and its senior women’s team won the FIFA Women’s World Cup in Germany in August.

“The Japanese are very serious competition in every tournament these days. They love football”, said Sir Bobby, member of the 1966 World Cup-winning England team and one of Manchester United’s most famous players.

Thanking Bernstein for the trophy, Ogura said: “I believe this cup represents a strong bond of friendship between our two associations and will play an important role in the development of football in Japan, and I would like to express my deepest appreciation to Mr Bernstein and all the people at the FA”.

The new 48cm-high cup will be awarded to the winners of the Emperor’s Cup on 1 January.