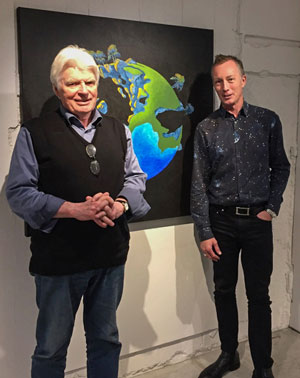 When I was a kid, I had posters of Roger Dean’s art on my bedroom walls. Those iconic floating pieces of land or fragments of planets drifting through space that most people recognize as the album jackets for progressive rock band Yes. I always wanted to find a way to visit those lands somehow. Forty years later, I got to meet the man himself and immerse myself in his world through conversation.

I wasn’t the only person who had his famous art on my walls—Dean noted that the officially recorded number of posters, post cards and books of his art that have been sold is 60mn, but unofficially he thinks it’s closer to 100mn. Staggering real world numbers for someone creating imagined worlds.

We met in April at a gallery in Tokyo where he was holding an exhibition and a live painting session with his daughter Freyja, also a painter and currently a Tokyo resident. It was quite an experience watching one of his fantasy landscapes being born on the canvas. The father and daughter created a piece inspired by a cherry blossom tree outside the gallery window. This was a clue as to what I was to discover about Dean’s work.

When I asked Dean how his imagination came up with those fantastical landscapes, he said it was from climbing mountains across Britain and being inspired by the natural world around him. In the Lake District, he saw tiny lakes on top of the mountains with small islands and silver birch trees, stunted by the harsh weather, almost bonsai in form. And in the Scottish Highlands, low cloud drifting through made it look as though the outcrops of rocks were floating in clouds.

“That imagery stayed with me”, he said. “I loved those landscapes that inspired me, but they were inventions I let myself make up”.

He stressed that his art is intended to show that our real world is the most magical place. “The landscapes are not necessarily meant to be taken literally, but they are meant to make you want to go there”. I responded instantly that indeed they did!

Dean trained as a draughtsman and designer, as well as learning life drawing. He had success with his first design job out of college in 1966 with a chair called the Sea Urchin. This early recognition led him to being asked to design the seating for the famous jazz club Ronnie Scott’s in Soho, with the resulting introduction to the music world leading him to start designing album jackets for various rock bands, including Yes, for whose covers and logo he has become most famous.

I asked whether the music of the bands he paints for inspired the art.

“Not in the sense the question is asked—I don’t listen to a chorus and think that sounds like this colour”, he said. “What I did was talk to the band about ideas to see where they’re coming from. I didn’t want to be literal. I wanted to be more romantic. Music directly doesn’t give me pictures, but is music inspirational? Of course it is”.

I was quite surprised to discover Dean doesn’t listen to music while painting. Instead, he listens to talk radio, the news or audio books—when painting, he needs his mind to be occupied by something else so the art flows without conscious thought. “I have to take my mind completely out of the process”.

Dean studied kendo and said, “I found out I learnt more about art doing kendo than I was ever taught in art school. You train the hands, so the hands train the mind. It’s important in kendo, but it’s crucial in art”.

In comparison with a concert pianist, who needs to practice for 10,000 hours before reaching the highest level, he added, “You practice so you can deliver without thought”.

Dean’s work has inspired countless other creative people, most notably film director James Cameron and his record-breaking film Avatar. Dean unsuccessfully sued Cameron for “idea theft” in 2014. Other opportunities for Dean’s art to be seen on the big screen, or in virtual reality (VR), are in the works. He says about the ever improving technology behind the latter that, “The potential for it is breathtaking”.

So today, after all of his success, what’s on his wish list?

“VR. Architecture has always been in my imagination and on my wish list since college years, so to do a virtual experience where you can explore those worlds [is exciting]”. He gave me the answer I was hoping to hear, because I have been wanting for many years to step into those posters on my childhood bedroom walls. I still might get that chance and to feel like a kid again.