The floods across a wide swathe of Western Japan, killing over two hundred people and temporarily displacing millions, were yet another reminder of how vulnerable Japan is to natural disasters, and how resilient the Japanese people are.

In July, the British government published a white paper on its future partnership with the European Union. Naturally there was much interest here, and I held a press conference for Japanese media, as well as writing to update top politicians and business leaders.

The proposals are well-judged to find a way of ensuring that the UK government fulfils its political mandate from the referendum of regaining control of our borders, our laws and our finances, whilst enabling the maximum continuity for trade and investment.

Trade Secretary Dr Liam Fox set this out in more detail during his visit to Tokyo in late July. He then called on Prime Minister Abe and ministers from the Ministry of Economy, Trade and Industry, and the Ministry of Foreign Affairs and the Cabinet Office, and held a number of meetings with business representatives. Prime Minister Abe warmly welcomed the UK’s interest in considering joining the Comprehensive Partnership on Trans Pacific Trade (CPTPP). 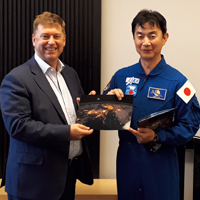 Star struck
Last month, I visited Tsukuba Science City in Ibaraki Prefecture for the first time, with members of my trade and science teams. Established in 1963 just 50km northeast of Tokyo, the City of Tsukuba houses 29 national and public research institutions.

At the Japanese Aerospace Exploration Agency, I was given an overview of Japan’s impressive space programme. The nation’s comprehensive capabilities include rocket launch sites in Kagoshima Prefecture.

Space is one of the areas in which the UK and Japanese prime ministers agreed last year to increase collaboration. This could include addressing the problem of space debris. The increasingly large volume of redundant kit floating around the Earth has the potential to damage expensive communications satellites. 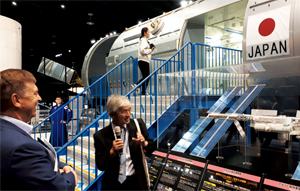 At the Space Dome Exhibition Hall, you can go inside a mock-up of the Kibo, Japan’s experiment module and the largest module of the International Space Station (ISS). It was a particular privilege to meet Kimiya Yui, one of Japan’s 12 astronauts (the UK has had only two), who in 2015 spent 141 days in space. Astronauts are a special breed—highly intelligent, super-fit and brave. I would have thought once would be enough, but Yui said he’d love to get back into space again. He politely fielded my star-struck questions, such as, “How do you sleep in space?” His answer: “It doesn’t matter in zero-gravity. Standing up, lying down; it’s all the same”.

We also toured the prestigious National Institute of Materials Science and heard about its collaboration with Rolls-Royce to develop alloys for jet engine turbines which are capable of operating at extraordinarily high temperatures.

And we had lunch with Tsukuba’s dynamic young city mayor, Tatsuo Igarashi. Educated at the University of Glasgow and University College London, he credited his experiences in the UK with his decision to go into local government where he could make a real difference to people’s lives.

Interestingly, as a relatively new city, Tsukuba’s challenges are the opposite to those of many Japanese towns which face falling populations and ageing citizens. Mayor Igarashi told us he is more focused on building enough schools for his young population—and with so many PhDs among his townsfolk, those schools have to be pretty good.

A group of hibakusha visited the embassy to detail their experiences

Nuclear free
This was a very different conversation to one I had over a lunch I hosted for Baroness Cavendish, who used to be David Cameron’s chief policy adviser, and is now writing a book on the challenges of ageing societies. We were joined by former Health Minister Yasuhisa Shiozaki MP, and a former chief government economist, and a top academic dementia specialist. Ageing raises many issues: medical costs, lack of carers, fewer workers and lower tax revenues. And in Japan it exacerbates the growing trend of rural depopulation, as younger people move to the cities, leaving country towns and villages with increasingly elderly populations.

A group of hibakusha from the Hidankyo (Japan Confederation of A- and H-bomb Sufferers Organizations) called on me in the run up to the Atomic Bomb Memorial events in Hiroshima and Nagasaki in August, which I had attended last year. They outlined their life-stories: most had been young children, or even in the womb, when the bombs struck, but the experience had impacted their whole lives.

They lobbied the UK to join last year’s United Nations Treaty on the Prohibition of Nuclear Weapons. I explained that the UK shared their ambition to see a nuclear-free world—indeed we have halved the number of our nuclear weapons since the end of the Cold War, and now only account for less than 1% of the world’s nuclear weapons. I added that we saw the Nuclear Proliferation Treaty, which celebrates its 40th anniversary in 2020, as the best approach to making practical progress towards nuclear disarmament, and so that was our focus. 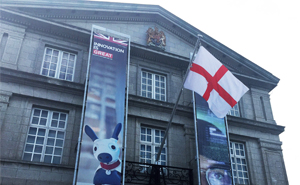 The St. George’s cross flew at the embassy when England played in the World Cup

Sleepless nights
Dinner in Kumamoto to celebrate the 25th anniversary of the local Japan British Society was a fascinating insight into the broad range of reasons that people in provincial Japan are interested in the UK.

There was the local medical professor, who had studied in Edinburgh; the local museum director, who used to work for the British Council; and a former priest who came as a missionary and stayed on to teach English after marrying a local resident. Then there was a local businesswoman, who has built a thriving shortbread business with skills acquired when she was previously married to a Brit. Plus of course many who have visited the UK for holidays or enjoy literature and other aspects of our culture.

Finally, congratulations to both Japan and England for a great showing at the 2018 FIFA World Cup. Japan was very unlucky to go out to Belgium in the knockout stages after securing a two-goal lead. And the young and relatively inexperienced England team did a fantastic job to reach the semi-finals. We flew the St George’s flag at the Embassy whenever they played, and I was ready to host a party if they made it to the final.

It was a heady few weeks of sleepless nights—those 3am starts could not have been more badly designed for this time zone. We exchanged excited WhatsApp messages with our three children, including the eldest who was actually there in Russia, and football came up in almost every business meeting I had. Let’s hope the 2019 Rugby World Cup goes just as well—if not better—for our teams and Japan.