Officially, the unprepossessing split-level restaurant beneath the railway tracks close to Yurakucho Station is known as Shin Hinomoto. More commonly, among regulars and people who have heard legends of the place, it is Andy’s izakaya.

Andy Lunt has worked in his in-laws’ business for the 25 years since he arrived in Japan from Leicester, building up the restaurant to where the fare is synonymous with quality and, just as importantly, value for money.

Stop by on any weekday — when other local establishments are all but empty—and Andy’s place will invariably have few free seats. Forget about getting in the door on a Friday evening unless you have made a reservation well in advance.

But after what he terms a 24-year apprenticeship — that ended when he actually became the owner of the business in October 2009 — Andy has developed itchy feet. At 51, he says he needs a fresh challenge. 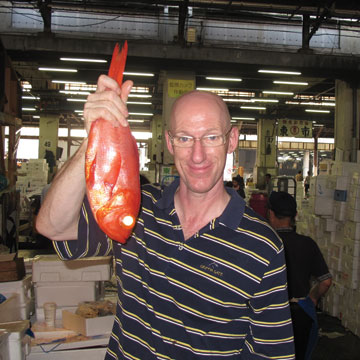 “I first had the idea five years ago, when we were becoming increasingly popular with foreigners — but especially with groups of women who came together, liked the food, asked lots of questions and began to ask me to take them around Tsukiji”, he said.

“As expats, they perhaps found the place a bit of a mystery, but I’ve been going there for such a long time that I know the characters and the best places from which to buy”, he said. “That progressed to people asking me to buy a nice fish for a barbecue or some sort of event, so the new business has evolved out of that”.

Drawing on his quarter-century of knowledge, Andy set up andysfish.com in September and has already started hauling in orders.

A daily visitor to Tsukiji, where he buys fish for his izakaya, Lunt is now taking orders online. After careful selection, the fish are then cut and filleted at a refrigeration unit he is renting on-site before being packed and delivered to the customer’s door.

“The only ‘drawback’ is that I refuse to buy cheap fish”, he said. “There is a lot of fish that comes into Tsukiji that is what I would call of dubious nature and I won’t touch it. Of course I could get similar fish for about half the price, but you wouldn’t want to eat it”.

Red Snapper is just one example, he pointed out. Specimens can be bought at Tsukiji relatively cheaply, but because of the poor nutrients in the water where the fish were before being caught, the meat has a low fat content and is dry.

“Red Snapper from Choshi is completely different”, he says. “It has a great texture and the flavour really comes out. That is something I have learned over the past 25 years.

“And next time you’re in the supermarket, take a look at their farmed scallops”, he added. “They will be grey and wrinkled. When I buy mine, they’re still twitching”.

As if on cue, a platter of Canadian black cod and another of New Zealand king salmon emerge from the kitchen. Each has been soaked in white miso for two days; the skin peels easily away from the meat, which melts in the mouth.

“My fish are not cheap”, said Andy. “But equally they’re not expensive and you can be sure they’re going to taste great”.