Arsenal Ladies had two wins and one draw on their three-match tour of Japan in late November. But, for last season’s treble-winning team, just as important as the results was the chance to express their support for, and solidarity with, the people of the Tohoku region.

“As soon as we knew this tour was an option, we wanted to take it up”, said Laura Harvey, the team manager. “With women’s football, it is rare that you can give something back like we have been able to here, and we are really grateful we have been given an opportunity to help out in any way we can.

“We’ve loved being in Japan and it has been exactly as we had hoped it would be”, she added. “The people have been really respectful, and the hospitality we have had has been fantastic.

“We hope that the funds raised from the match can help in some way with the relief effort for the earthquake earlier in the year”.

All proceeds from the first match of the 11-day charity tour, against Japanese women’s league champions INAC Kobe Leonessa at the National Stadium, went towards reconstruction efforts following the 11 March disasters in the north-east.

“There were 11,400 people at our first game, but it sounded like a lot more than that”, said Jayne Ludlow, who captained the team in the absence of the injured Faye White. “Just like in the UK, there were a lot of younger females and the demographics of the crowd were very similar. 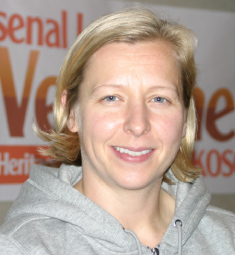 “The 1-1 draw was a good result”, she said. “They had more possession in the game, and that was something of a different situation for us.

“It was a very competitive game and it was a great team performance”, she added. “We had to dig in there at times, but we also created quite a lot of chances and it was a hard, physical game”.

Ludlow, 32, was obliged to sit out the remaining games of the tour after picking up an ankle injury, but the team fared well despite her absence.

The second match ended in a 5-0 rout of the students of Musashigaoka College, and the tour ended with a 3-1 win over NTV Beleza, runners-up behind Kobe in last season’s women’s league here.

The match against the college marked a successful 15-year relationship between the two teams that has seen Arsenal host a group of students in London each year, and even recruit a couple of the most promising players.

Arsenal Ladies had never been to Japan and, in fact, the tour was the first by a European women’s club to Asia. But Nadeshiko Japan’s summer 2010 victory in the Women’s World Cup in Germany has raised the profile of the sport both here and overseas.

“We come here as treble winners of a much revamped women’s game in the UK—with the new Women’s Super League—so we are confident we can do well, but it’s fair to say that the World Cup has transformed the game here and taken it to a new level”, said Harvey. “We want to learn from that and take some of the ethos back to England with us”.

The team also took time out to hold a couple of football clinics for children, including some from the Tohoku region, and visited a Nike tour for some promotional work.
They were also able to do some sightseeing in the early part of the trip, while they were shaking off the jet lag.

“I love the place”, said Ludlow, who also is captain of the Wales national team and works as a physiotherapist for Arsenal. “It’s somewhere that a lot of the girls were really looking forward to visiting, because it’s not the sort of place we would usually come.

“It’s a completely different culture, which is interesting”, she added. “We have done quite a bit of sightseeing, took the bullet train to Kyoto and explored the temples and castles there.

“We stayed in a ryokan and had a surprisingly good night’s sleep on tatami mats”.