The floors are burnished hardwood and the kitchen surfaces flecked marble. The architect’s clever use of light lends the apartments a sense of space and airiness. The over-sized windows take in the green expanse of Yoyogi Park, while the night view from the roof garden — complete with Jacuzzi and designer barbecue — is across the bright neon glare of the city and includes the skyscrapers of Shinjuku.
Clearly, no expense was spared by award-winning architect Paul Davis when he dreamed up Grosvenor Place Kamizono-cho for the privately owned British property group that gives its name to the apartment complex.

“This is the first Tokyo develop-ment in which we have been directly involved with a partner, although we have had exposure to residential investment here over quite some years”, said Nicholas Loup, chief executive of Grosvenor Ltd. 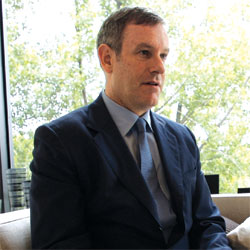 “A lot of what we have been doing has involved buying existing properties, upgrading the facilities and re-letting them, but it was always our plan to get involved in the development of residential properties which we could then brand with the Grosvenor name”.

The result has been a joint venture with Tokyo Tatemono offering standards of quality rarely seen elsewhere in Japan. Completed in October 2008, the complex has 45 units, with an average size of 230m2, as well as 10 penthouses.

Davis insisted on using the highest-quality materials and keeping the design simple, yet retaining the attention to detail. The ground-floor residents’ lounge has a fireplace — with flickering gas flames — and the fitness room is state-of-the-art.

Covering a total of more than 18,000m2, the complex has an occupancy rate of more than 90 percent — impressive in these straightened economic times — and more than half the residents are CEOs. Some 70% are expatriates, who are attracted by the international yet “homely” atmosphere. Events are organised throughout the year for residents to encourage interaction among them and to foster a sense of community.

Halloween and Christmas parties are popular among the children, while their parents are keen to attend events held in collaboration with luxury brand-name firms, including fashion houses and wine merchants.

Loup opened Asia’s first Grosvenor office in Hong Kong in 1994 — where the impressive Westminster Terrace became the latest addition to the portfolio last October—followed by the Tokyo branch of the firm in 2001. Reflecting the growing importance of the booming Chinese market, Grosvenor opened a Shanghai office in 2004 and will be starting business in Beijing within the next couple of months.

And even though the last couple of years have been testing for both the property and financial industries, Grosvenor’s figures have stood up to that test. Gross rental income totalled £318.1 million in 2009, up from £277.3 million in the previous year, while the firm’s financial capacity has risen from £523 million to £964 million over the same period.

“Property markets always have cycles”, said Loup. “The recent cycle may have been particularly testing in the Tokyo market and for the Japanese economy as a whole, but we have seen recently that Japan’s overall recovery has been quite strong in terms of GDP growth and there is an underlying strength to the economy here that gives me confidence.

“The economy ultimately drives a property market, but what drives the Tokyo property market is partly separate from the overall Japanese economy”, he said. While the total population of Japan may be contracting, he pointed out, Tokyo’s population continues to grow, businesses remain centralised in the city, and the GDP of the metropolitan area is approximately the same as that of Spain.

That confidence in the state of the economy translates into new projects in Japan for Grosvenor. 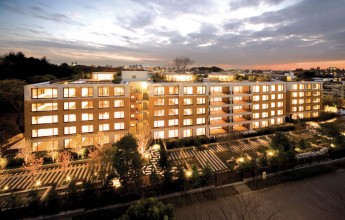 “We are in active negotiations concerning a number of very exciting projects and are focusing on two areas for our new investments”, said Loup. “First, we are concentrating on new, high-end residential properties such as Grosvenor Place Kamizono-cho, and are working on a couple of sites with our local joint-venture partners. Second, for our own portfolio, we are focusing on medium-term commercial properties such as Tokyo office buildings”.

The only British property firm that is active both as a developer and investor in the Japanese market expects to announce new projects within “a couple of months”, Loup added. Within the same time frame, a new $500 million, multi-sector property fund will be launched.

“The key part of our strategy in this sector is to work with some of the best residential architects in the business, people who deeply understand and have built their careers on residential properties instead of just being a big-name architect”, said Loup.

“They have to know how people live — culturally, aesthetically — so the design is very important and, as you see, the quality of the materials shines through”, he added. “The combination of a good architect and a Japanese contractor — Kajima Corp. — that has been professional and provided workmanship of outstanding quality makes a big difference”.

HISTORY
Grosvenor has been in the same family for close to 1,000 years and can trace its history back to the arrival of William the Conqueror on England’s shores in 1066.

The Grosvenor family was already a wealthy landowner and expanded its portfolio in England with William’s victory. The company received a major boost to business in 1677, with the marriage of Sir Thomas Grosvenor and Mary Davies, through which the company acquired 500 acres of land described as “swamp, pasture and orchards” to the west of the City of London. Those 500 acres remain as Grosvenor’s London estate and are today known as Mayfair and Belgravia.

The firm began to apply its estate management skills to investment and asset management in the 1950s, and in that decade expanded into the Americas, followed later by Australia, the Asia-Pacific region and, in the late 1990s, continental Europe.