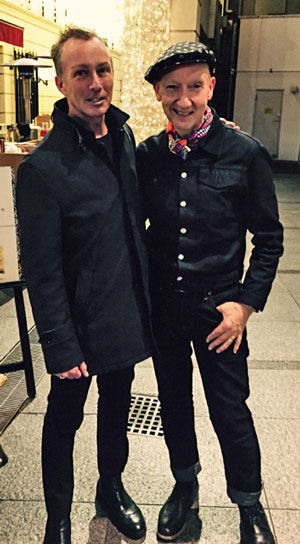 “A hat is a party on your head”. It’s my favourite quote by British milliner Stephen Jones OBE, hat maker to both royalty and rock stars.

In addition to British clients, Jones has a long connection with Japanese clients through his creation of exclusive lines for department stores, regular lectures at top fashion colleges here, and collaborations with the fashion icon Rei Kawakubo of Comme des Garçons.

Over the years I have met Jones a number of times for interviews, most recently in spring 2017 with the publication of his book Souvenirs, a biography and retrospective delving into his vast archive of photos, design sketches, clippings and quotes lovingly collected by his two sisters.

Looking through the book and back over the years, Jones reflected, “I didn’t seek success, I just wanted to have a good time”. Are you still having a good time? I asked. “I hope so. Yes!” he said with a hearty laugh.

The good times started in London in the early 1980s, with Jones making hats for himself and the trend-setting, broke club kids around the Blitz nightclub scene. It was a hub for pioneering creative people, including fashion designers Vivienne Westwood DBE, John Galliano CBE and Alexander McQueen CBE. It launched the New Romantic music movement, which was led by bands such as Culture Club, Spandau Ballet and Duran Duran. Creating hats for his flatmate Boy George was the launch pad for Jones’s career, and as the singer’s star rose, so did Jones’s.

Royal welcome
A pivotal moment in his career, for which Jones is eternally grateful, was when Princess Diana became a fan and a regular customer. He said, “Probably the thing that was most extraordinary for me was meeting the Princess of Wales. To go to Buckingham Palace at the outset of my career and have a fitting with her, that was amazing”.

His royal connection has continued, with Jones designing the bridal veil for the wedding this year of the Dutchess of Cambridge’s sister, Pippa Middleton.

And Jones has put hats on the heads of rock royalty, too, including David Bowie, for whom he created the Pierrot hats in the 1980 Ashes to Ashes video. Like so many creative people, Jones was greatly inspired by Bowie and recalls first discovering him around 1973.

Jones was shocked to hear the news of Bowie’s death and was touched when he realized that in the last photo of Bowie taken in public, he was wearing a Stephen Jones fedora.

Under pressure
Jones has also created hats for Mick Jagger MBE over many years, most notably for The Rolling Stones’ 2014 world tour. We talked about Jagger’s partner at that time, fashion designer L’Wren Scott, for whose runway shows Jones also had designed hats. Her suicide, possibly brought on by the stress of the fashion industry, was terrible but not entirely surprising for Jones. He acknowledged that the pressure on designers is immense. They must come up with a collection every six months, not to mention all the related business responsibilities they have.

“What people don’t actually know is that fashion has always been like that”, he said. “Christian Dior himself only designed for 10 years from 1947 to 1957, before dying of a massive heart attack because the stress was so great. It’s a very intense business”.

I wondered whether Jones feels consumed by the pressures of the fashion business.

“I’ve been doing this for more than 30 years and I’m still here. And why is that? I think because I’m a milliner, I’m slightly on the periphery of the fashion business, one little notch sideways, so the pressures aren’t as great. But of course you’ve still got to come up with the goods every season, pay your employees—you’ve got to do all that”.

Despite the pressures, Jones is still filled with the youthful excitement of creating hats, just as he was in the Blitz club days. To get inspired for a new collection, he recently asked his muses and friends what they would like to have a hat for. Their answers confirmed his theory of a hat being a party on your head, with one saying, “I want a hat for skiing on the moon”.

Our conversation came to a close with me saying I really want to join his party, and Jones generously answered that I am on the guest list. Well, I’m delighted, because this seems like a party too good to miss.