As one of Britain’s top police dog handlers, Geoff Bowers was accustomed to putting the 500 animals in his charge through their paces. These days, he is happy to admit that a run with his small number of pet dogs leaves him exhausted. The reason: they are fed a diet comprising completely raw and natural ingredients — a food more than a decade in the making without the additives, grains and cereals found in conventional dog food.

Bowers, who set up K9 Natural in New Zealand in 2006, says his products are the nearest domesticated dogs get to a diet of their close genetic cousin, the wolf. His firm’s slogan: feed your dog’s inner wolf; trust your instincts. 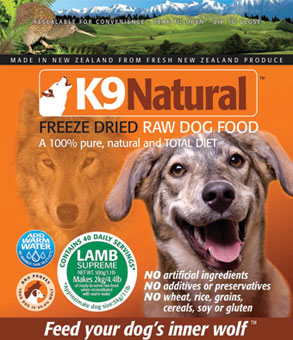 K9 Natural’s foods, including lamb, beef and venison, borrows heavily from the diet of the North American grey wolf, since research shows that the DNA of the domestic dog is at most only 0.2% removed from that of the grey wolf.

Having successfully introduced his dog food in the United States, Australia, New Zealand, and several countries in Asia and Europe, Bowers is preparing to boost K9 Natural’s presence in Japan’s $2 billion-per-annum pet-food market.

Bowers told BCCJ Acumen he is convinced that Japan’s notoriously finicky consumers will be sold on the quality of his comparatively expensive products. “Our aim in Japan is to become the number one brand — not the best seller, we know that won’t happen. We want to be recognised as the best there is on the market”.

His epiphany came during four months in Alaska with a leading wolf researcher. “We keep our food as close as possible to what wolves eat in the wild. Nature provides them with food that makes them athletes, and we’re doing the same. Our food is washed in plain water, there are no hormones or antibiotics, and all the animals we use are grass fed. Our food is fit for human consumption”.

Bowers then put his police dogs on a raw, meat-based diet, free of the grains and cereals blamed for canine diabetes, allergies and other illnesses. The results were dramatic: the dogs’ fitness levels soared and visits to the vets became fewer.

Bowers put his business plan into effect after arriving in New Zealand eight years ago as a British police officer recruited by the country’s force. “It was my way of paying back the dogs that had looked after me so well on the streets of Britain”.

K9 Natural has won awards in New Zealand and in October was named the country’s eighth fastest-growing company, with annual growth of well over 600%, according to Steve Collins, managing director of the firm’s Japan unit.

The ingredients, all sourced in New Zealand, comprise at least 85% meat, blood and bone, plus fruit, vegetables, eggs and garlic. Collins describes much of the produce offered by big pet-food firms as “fast-food for dogs”.

“Other pet foods claim to be natural, but in fact they are full of additives. Everything that goes into our food can be found on supermarket shelves”.

From December, K9 Natural Japan KK became the sole importer and distributor in Japan of the firm’s proprietary dog food and will focus on freeze-dried, rather than frozen, products — a plus in a country where most households have limited freezer space.

Collins concedes that K9 Natural’s products are more expensive than those of other makers — a 500g bag makes 2kg of food and sells for ¥4,830 (including tax) — but he believes that Japanese consumers will pay more to ensure their pets are fit and healthy.

“So far the reaction here has been positive. Japan is a great opportunity for us”.