Bring on the English, says city with cricket aspirations

At a council meeting in Sano City, Tochigi Prefecture, on 6 December, the executive committee discussed an item more commonly associated with Commonwealth nations—promoting the “noble game” of cricket. A curious entry, this may seem, but it’s at the heart of an ambitious plan to make Sano the centre of cricket in Japan. Days later, the city unveiled a cricket supporters’ club with the catchphrase “Sano, Home of Cricket”. 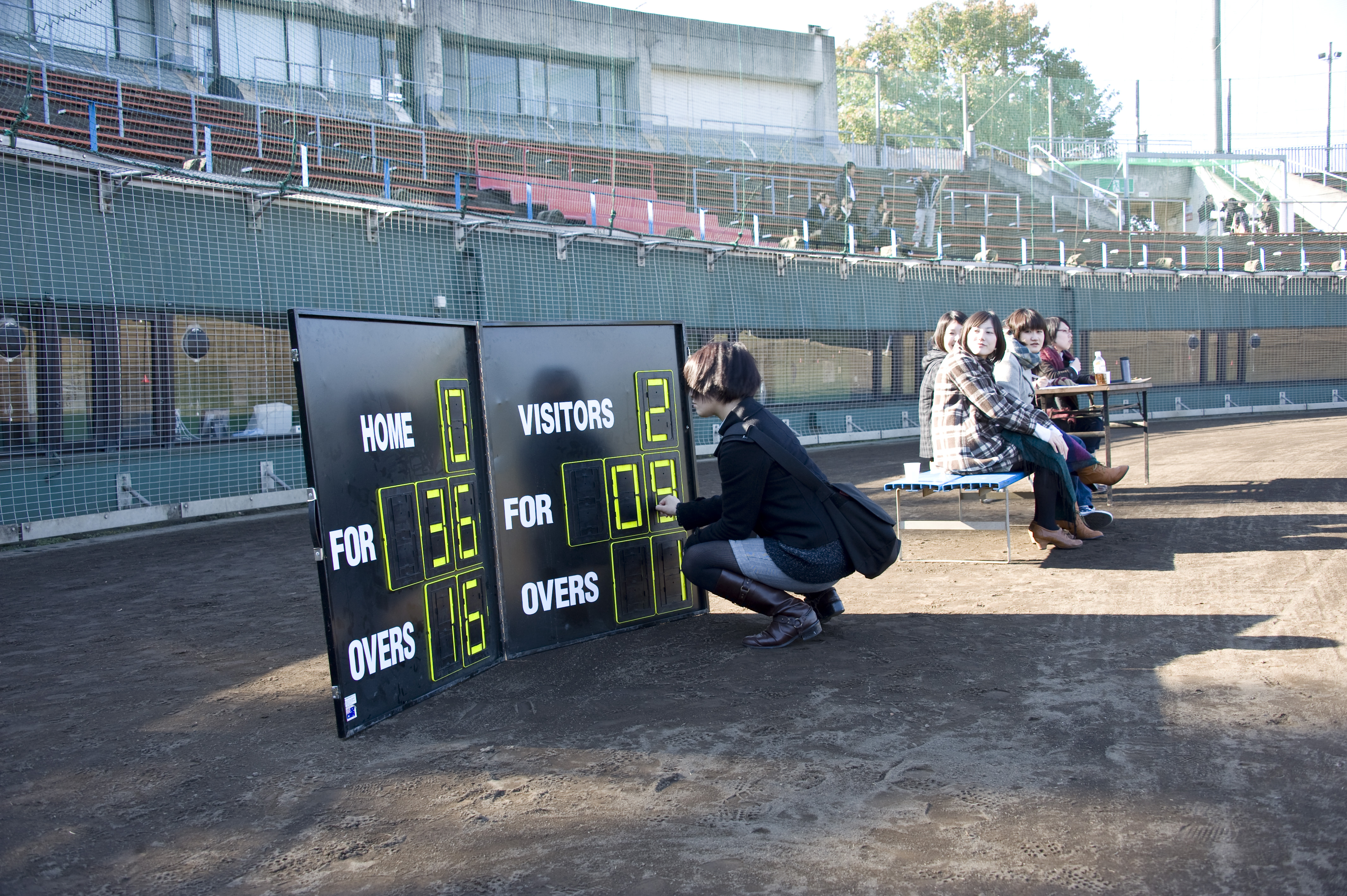 Cricket match in Hachioji on 26 November

But why cricket? Why Sano? For the 124,000 residents the answer is simple. “Many cities are known for something: Aomori has its apples; Utsunomiya has gyoza”, said resident Toshio Yoshida, 59. “But nobody knows where Sano is. If cricket helps put it on the map and attract business, I’m all for it”.

Post-war projects to provide regional locales a much-needed fillip gave cities and towns throughout Japan products to sell to the newly affluent bubble-era Japanese. Yet, while anything from melons and beef to manga characters and even Jesus Christ have become regional selling points, sport mostly has been overlooked as a means to push local identities à la Wembley, Aintree and St Andrew’s.

Sano is looking to buck that trend and become the official Japan headquarters of a sport second only to football in global popularity. By doing so, officials hope to create a “Sano brand” and attract visitors and investors from far and wide. 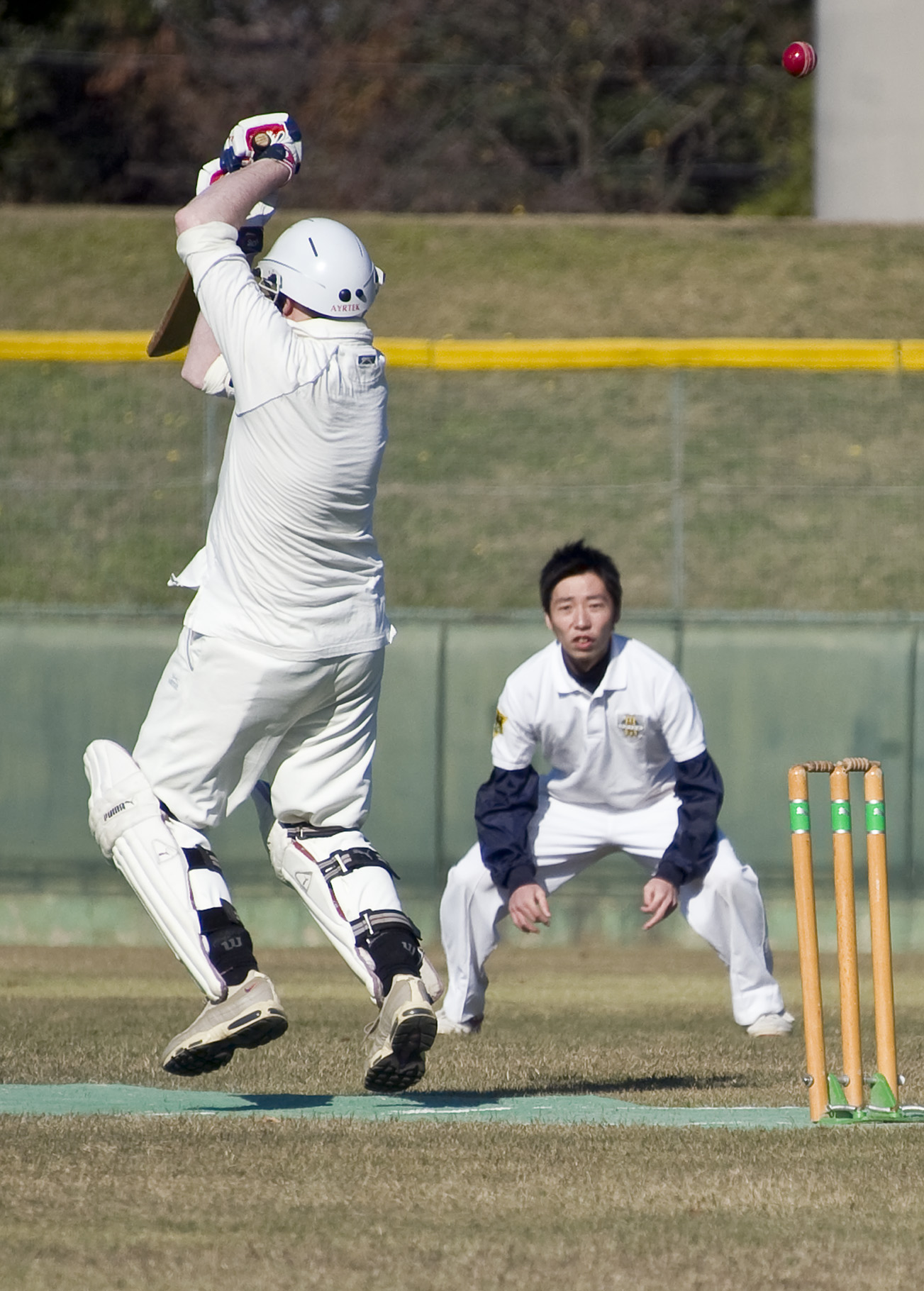 “We wanted something that would help promote Sano, and thought this could be achieved through such a major sport with such a huge global following”, the Sano mayor, Masahide Okabe, told BCCJ ACUMEN.

“The objective is to spread cricket at grassroots level and develop infrastructure. In this way, we can attract international competitions and foster cultural and business relations”.

Sano already has hosted international tournaments, the East Asia/Pacific Women’s Cricket Trophy having been held there in 2010. The direct economic impact, including hotel revenues, was estimated to be ¥30mn, according to Naoki Miyaji, chief executive of the Japan Cricket Association’s (JCA) Sano branch.

“This made local businesspeople realise the potential”, said Miyaji, who is also a member of the men’s national team. “The supporters club is a huge step in making the venture financially self sufficient”.

The desire to ensure financial independence is a reflection not only of the state of regional finances, but also of a longer-term plan to sell the business model elsewhere in Japan and make the sport a part of the cultural fabric, not just something enjoyed by expats.

Many in Sano believe this is not such a long shot. In 2011, the JCA took cricket to 3,000 elementary and junior high school students in Sano alone and this year will increase that to 5,000.

And the Cricket for Smiles programme, which the JCA started in June, aims to take cricket to 25,000 children affected by the 11 March disasters by the end of 2012. 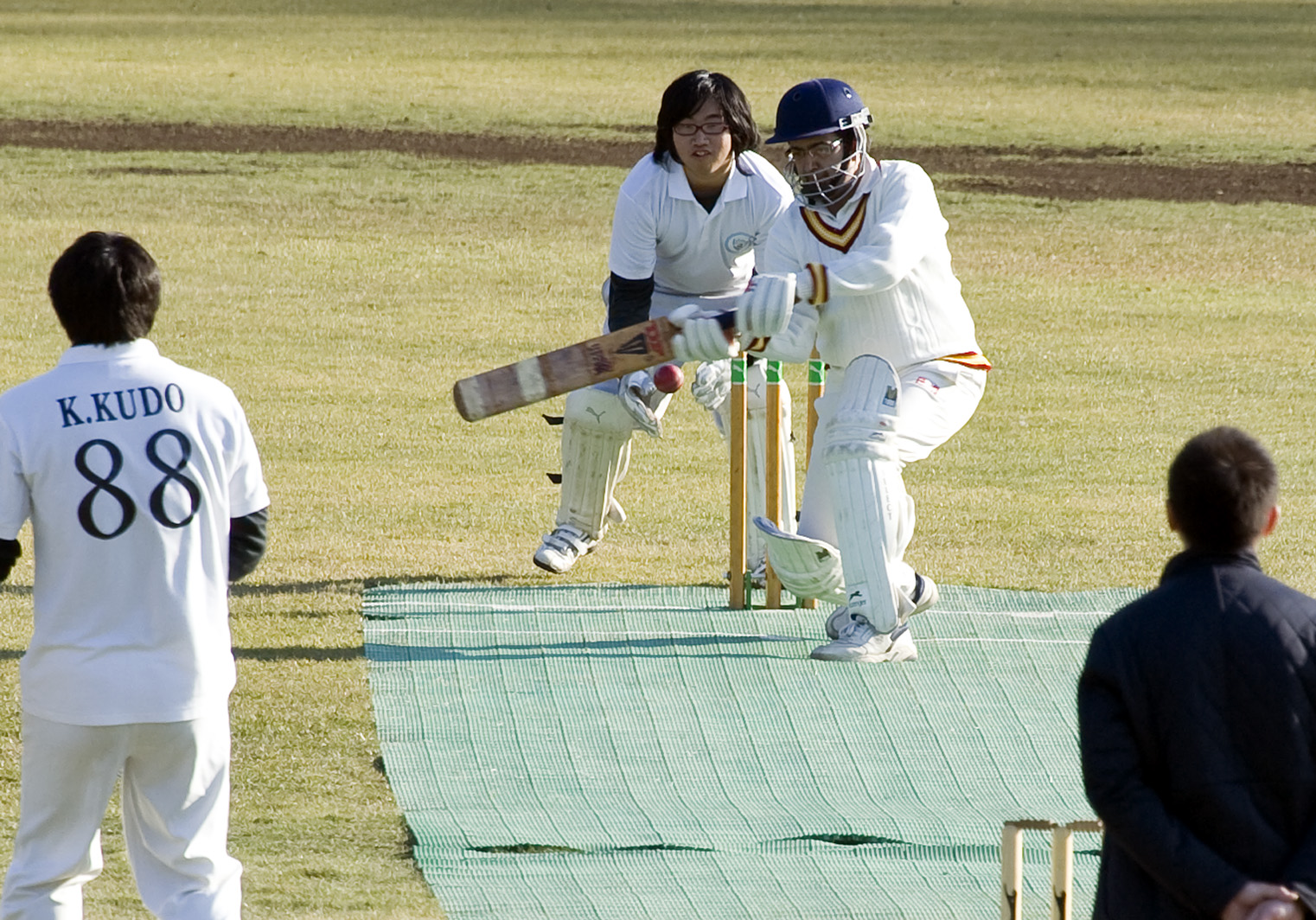 “Traditionally, cricket is known as a gentlemen’s game and I think the overall ethics of the sport are akin to the true Japanese spirit”, said local civil engineer and cricket enthusiast Takatoshi Tamekuni, who is masterminding planning of the Sano project.

“Somewhere down the line we lost that spirit, but I think the true Japanese ethos lies much closer to the values found in cricket than in our most popular sport, baseball”.

Kanai Shimada, president of the local chamber of commerce, concurs: “There are many youngsters who are looking for alternatives to baseball and soccer”, said Shimada who, as a youngster, shunned baseball in favour of running. “I believe a big reason cricket never spread as far as those sports is the lack of facilities”.

Indeed, cricket’s impact on Japan has been limited, although ironically its introduction here predates that of baseball by several years. British merchants in Yokohama founded Japan’s first cricket club in 1868, after which the Yokohama Cricket Club (YCC) gradually extended its scope to include football, tennis, rugby and lawn bowls. Today it is known as the Yokohama Country & Athletic Club, and is located on the Bluff.

In 1870, a second cricket club was set up in Kobe and the Kobe Cricket Club (later renamed the Kobe Regatta & Athletics Club) and the YCC often held inter-port matches, alternating venues and using a wicket made of matting over grass. 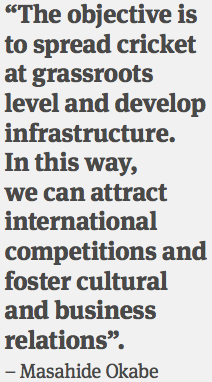 But Japan had to wait until the 1980s for the game to really gain traction. While expat-led club numbers had grown steadily since World War II, Kobe University of International Studies was the first team to take the sport seriously and was the first to tour overseas: it went to New Caledonia in 1985.

Since then, the game has spread, with the number of men’s and women’s teams now topping 200 and including about 20 from universities, according to the JCA’s Miyaji.

The JCA, meanwhile, has also developed. It gained affiliate membership to the International Cricket Council in 1989, and promotion to associate membership in 2005, the same year that the Japan men’s XI won the inaugural East Asia/Pacific Cricket Tournament.

At the national representative level, the improvement since 2005 has been steady, helped by the increasing number of players gaining experience in overseas leagues, according to Miyaji.

Worldwide, the men’s team is ranked 42nd, which is not as modest a showing as it may sound, says Miyaji. “It’s only one place behind Norway, whose team is made up entirely of expats from the Asian subcontinent. One thing we have focused on in recent years is the development of local talent”, he added.

As with many sports in Japan these days, it is the women’s team that seems to be progressing better. At the Women’s World Cup Qualifier last November, the team recorded its first-ever win against a top-tier nation, Zimbabwe, while a year earlier it took home bronze at the 2010 Asia Games in Guangzhou, China.

Predictably, perhaps, a sizable PR campaign followed, with popular singer Chihiro of Loverssoul releasing The World is My Stage and appearing on a poster, with national team members, tossing a cricket ball. 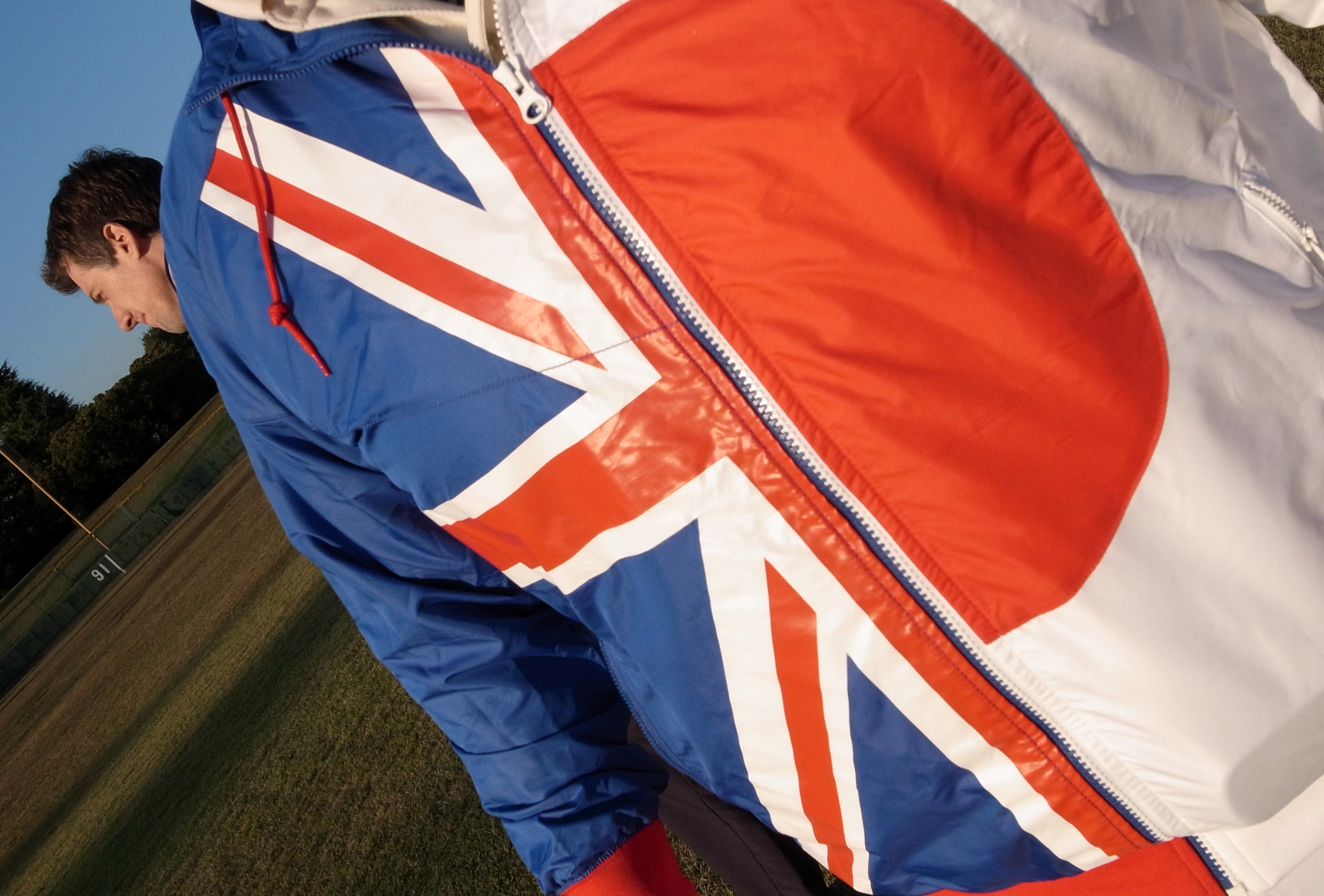 The brainchild behind that campaign was Yasuhiko Ota, a Sano-based farmer—albeit one with 30 years’ experience in the entertainment business.

“What struck me about this campaign was how engrossed Chihiro became in the sport when she went to watch a match [to find inspiration for the song],” said Ota, who turned his back on city life four years ago. “It made me think this must be something that will catch the imagination of young people as soccer did for my generation”.

Ota is one of many in the community who, until a few years ago, had never even heard of cricket, but now sees it in a different context.

As we drive through this otherwise uninspiring city, he talks about the economic benefits—estimated at about ¥700mn—that the women’s national football team’s September training camp provided for Mimasaka City in Okayama Prefecture.

“Admittedly, they had just been crowned world champions, but that training camp lasted just one week”, he said. “With careful planning, cricket could benefit Sano in a similar fashion”.

Ota has put his money where his mouth is, counting himself among the 70 individuals and corporations that have invested in Sano’s supporters’ club, which already has attracted ¥3.3mn in membership fees. 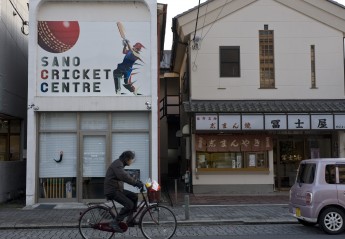 “It’s a worthwhile investment”, said local hotel manager Ryoichi Inoue after handing over his ¥60,000 corporate membership fee. “Room rates have slumped and we need to find some way of getting visitors to stay a night or two. If we act astutely, I think the city can fill more than just hotel beds”.

Miyaji believes that, as a first step to ensure international teams come to Sano, the national teams must become serious contenders on the world stage.

“Most members of the current men’s team started playing cricket at university, but the next generation of players started much younger and include some serious stars. The challenge, as always, is to find the necessary sponsorship to ensure they can continue developing their game”.

The annual funds from the International Cricket Council are almost entirely invested in grassroots development of the game, meaning that anything accrued from the supporters’ club will be invested in developing facilities and business ties.

The city has offered riverside land and a disused high school that, it is hoped, will be developed into a high-performance centre and, one day, a world-class stadium to attract more international tournaments, says city Mayor Okabe.

“Sano has already secured a match between Japan and Pakistan, which is lined up for April to celebrate the 60th anniversary of trade ties between the two countries”, he said, adding that he hopes the city soon will host an England XI. “That would pit the true home of cricket against Japan’s home of cricket. Quite a match”.

Cricket for Smiles
It’s hard to bring a smile to the faces of children who lost so much in the 11 March disasters—even harder, you would think, to do so through something of which they have little or no understanding.

But the Japan Cricket Association (JCA) is taking bats and balls to shelters, schools and temporary housing estates in the devastated Tohoku region to give them a new experience.

The “Cricket for Smiles” coaching programme was launched by the JCA in June 2011 with the objective of introducing cricket to 25,000 children affected by the earthquake and tsunami.

“We believe cricket can help heal the wounds and provide smiles, hope and courage to the people there”, said Naoki Miyaji, CEO of the JCA. 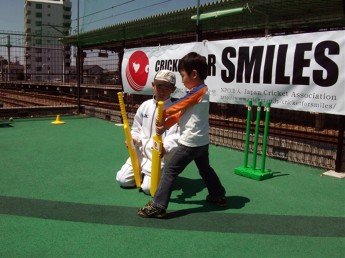 JCA members aim to visit 250 schools by December 2012 to teach children cricket and donate cricket bats, balls and wickets. In November, a truckload of 250 more cricket sets was delivered to the JCA, donated by Dubai-based cricket promoter and businessman Shyam Bhatia, patron of the Dubai Cricket Council.

The project has also been endorsed by the International Cricket Council, with chief executive Haroon Lorgat commending the JCA for its efforts to support the stricken communities in the north-east.

Leading the project is JCA official and Japan women’s national team Captain Ema Kuribayashi, who said the children really seem to enjoy trying a game that is totally foreign to them. “Even now, people in the affected areas are living with many challenges. Rebuilding their homes, schools, workplaces and towns will take years. We hope to bring smiles through cricket to the children who are facing many difficult years ahead”.