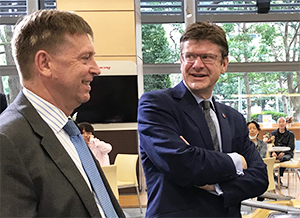 We had a big industry and innovation focus at the embassy during November. Secretary of State for Business Energy and Industrial Strategy Greg Clark was here, with his Permanent Secretary Alex Chisholm, for a busy three days. He met his counterpart Ministry of Economy, Trade and Industry Minister Hiroshige Seko, Japan Business Federation President Hiroaki Nakanishi, and a range of big Japanese investors in the UK, including three car makers. He outlined the terms of the Brexit deal and the next steps in the legislative process.

Mr Clark also addressed a seminar on the UK’s industrial strategy and the opportunities it offers for collaboration with Japan on big shared challenges, such as energy and the ageing society. Later in the month I hosted a couple of more industry-specific seminars at my residence: one on aerospace, with Rolls Royce CEO Warren East as guest of honour, and one on the rail sector.

I had a fascinating visit with my science team to the Super Kamiokande particle physics research project in Gifu Prefecture. The UK is one of the leading international collaborators in this “big science” project, which has already garnered two Nobel prizes. At the project I met researchers from Oxford, London and Liverpool Universities. We drove far inside an abandoned zinc mine deep in the mountains near Toyama, then were lowered down on ropes into a huge 40m-deep tank lined with photo receptors. We were lucky to be visiting during an overhaul period, when the water had been emptied out for the first time in 12 years. It was impressive and surprisingly beautiful.

Waseda University hosted a Birmingham University in Waseda day to mark the very successful, 18-year collaborative relationship between the two establishments. I visited to open a joint academic conference, which ranged from robotics to literature: Birmingham has its Shakespeare Institute at Stratford-upon-Avon, and Waseda was the home of Professor Shoyo Tsubouchi (1859–1935), who compiled the first complete translation of The Bard’s collected works into Japanese. 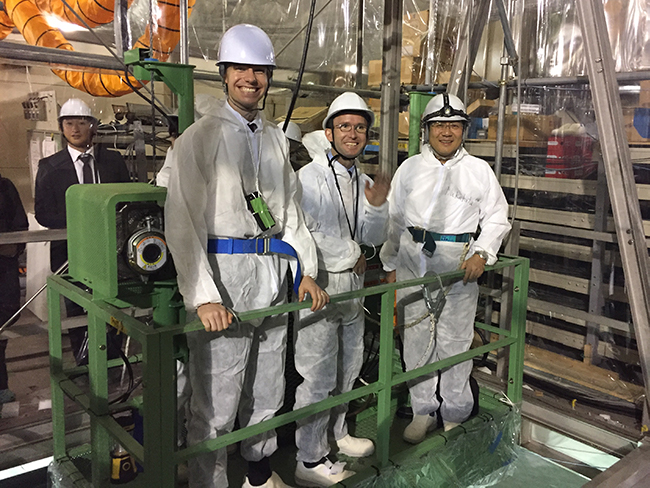 My wife Sarah and I were invited to a wedding reception for Princess Ayako, along with hundreds of others. It was a lovely occasion and the young couple were clearly radiantly happy. We bumped into Tokyo Governor Yuriko Koike there. She was just back from a trip to London where she had visited London’s Queen Elizabeth Olympic Park for briefings on our 2012 experiences, and had met the Lord Mayor Peter Estlin to discuss financial services cooperation, and London Mayor Sadiq Khan to exchange views on running a big metropolis.

We like to keep the Ambassador’s Residence busy with events, from business to politics and culture. I was delighted to co-host an event with Chatham House, or the Royal Institute for International Affairs, to give the distinguished London think tank its proper title. The theme was W20, the international conference on women’s issues which will take place here as part of G20 next year. I couldn’t resist saying that our seminar would be following Chatham House Rules, the widely followed international convention where participants agree not to attribute any comments made at a meeting to named individuals. It enables more open discussion.

The Foreign Secretary’s Special Representative on Climate Change Nick Bridge gave a presentation to business at the Ambassador’s Residence as part of a busy programme of calls. Japan’s climate change commitments have been challenged by the shutdown of its nuclear power stations following the Fukushima tragedy. Only a few nuclear power plants have been restarted so far. But as Prime Minister Shinzo Abe recently set out in a Financial Times article, Japan remains committed to meeting the targets it signed up to at the 2015 United Nations Climate Change Conference held in Paris.

Barclays Bank kindly brought the English Premier League Trophy (which they sponsor) to the embassy for some photographs, accompanied by the former Liverpool, Real Madrid and Manchester City star Steve McManaman. Later in the month the Chelsea CEO Guy Laurence was in town with football legend Didier Drogba, for some events with their shirt sponsor Yokohama Tires. They announced that Chelsea would be playing a match here next summer.

There was a big meeting in Tokyo of the Association of National Olympic Committees, so we met the British Olympic Association CEO Bill Sweeney, and the new vice president, former Olympic rower Annamarie Phelps. We also assisted with the visit by the Olympic Committee member from the British Virgin Islands, a British dependency. They only have a population of 70,000, but have a realistic medal prospect for 2020, which would be a fantastic achievement. 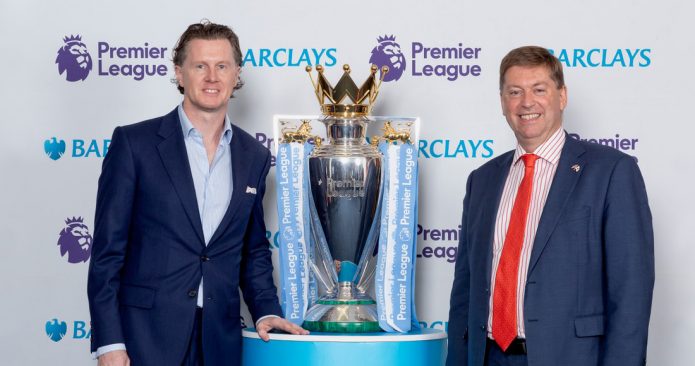 Many congratulations to Osaka. It was announced in November that they had won the competition to host the World Expo in 2025. As I mentioned last time, Britain had strongly supported their candidacy.

On 5 November, my home town in Devon, Ottery St Mary, hosts a big bonfire night festival, where men run through the streets carrying burning “tar barrels”. This year a delegation from their Japanese namesake village of Otari in Nagano Prefecture, were over in the UK to watch it. It is nice to see the friend­ship between the two communities still going strong 25 years on.

Sarah and I had a couple of pleasant weekends away to enjoy the autumn foliage. For me it’s the most beautiful time of the year in Japan. We were up at Lake Chuzenji, staying near the former British Embassy villa there. And we went to the historic city of Kanazawa, with its stunning Kenrokuen Garden, and the thatched roof villages around Shirakawa.

No sooner is Halloween over than Christmas is all around us. Our very first event of the season was the Parliament Christmas dinner, for the various Diet members who are Christians. It was a fun event with Christmas music played on traditional Japanese instruments.

As we approach the end of our second year back in Japan, Sarah and I and the staff of the British Embassy Tokyo and Consulate General Osaka send all ACUMEN readers our best wishes for the Christmas season, and a Happy New Year. 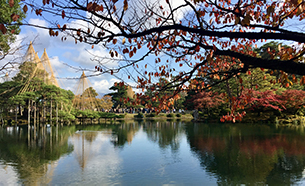 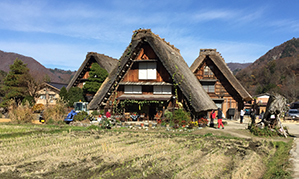 Shirakawa is famous for Gassho-style houses