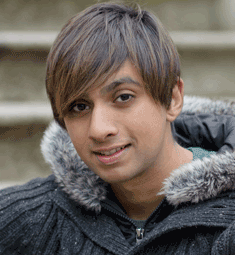 
A British man who had never before penned a haiku, a form of Japanese poetry, won the 2012 Japan–EU English Haiku Contest.

Zeshan Hayat, 23, from Slough in Berkshire, found out about the annual contest through Facebook and a lecturer at the University of Central Lancashire, where he studied Japanese and completed the Teaching English to Speakers of Other Languages (TESOL) course.

He now works at the Slough Shuhari Karate-Jitsu traditional karate club, which serves to promote the martial art, but he aims one day to teach English in Japan.

“I had not composed a haiku before, but I do write other forms of poetry and lyrics as a hobby”, Hayat told BCCJ ACUMEN.

“The thing I love about the haiku form is that it enables the reader to capture a moment and a feeling in such a few lines”, he said.

“It’s like seeing something and then blinking, so when you open your eyes the image no longer remains as it was.

“That brief moment in time is captured in the haiku form and, when reading other haiku, I can imagine what the writer had seen during his or her special moment”, he said.

Hayat’s entry for the third annual competition was judged the best out of those written and submitted by 419 EU participants, while a further 104 haiku were entered by Japanese writers.

Given the theme “Dawn” for this year’s competition, Hayat’s work is hauntingly simple yet evocative—just what the judges were looking for.

Haiku are typically characterised by three qualities, arguably the most important of which is the kiru (cutting). This is often represented by the juxtaposition of two distinct images or ideas.

Traditional haiku consist of 17 on (sound units), comprising three phrases made up of five, seven and five on. The third element is a seasonal reference, although this is less of a requirement in modern haiku.

“For this particular verse, I drew my inspiration from my eastern and Islamic roots”, Hayat said.

“As a follower of the Islamic faith, I pray five times a day at different times. The morning was always my favourite”, he added. “It was the sign of a new day, a sign of light breaking free from the darkness and because we are blessed with this light, we offer a prayer of gratitude”.

Hayat wrote three drafts of his haiku—in a very untraditional Microsoft Word file—and found that they all came to him fairly quickly.

“It was then a matter of choice, of which one to submit for the competition”, he said. “Whenever I write poetry or lyrics it seems to flow very easily from my thoughts into words and then onto paper”.

Hayat’s prize is a flight to Japan, courtesy of the Ministry of Foreign Affairs of Japan, which he will take in late November. He will head directly to Matsuyama City, Ehime Prefecture, which is considered the birthplace of haiku and was home to the Japanese poet Masaoka Shiki in the Meiji period.

Hayat also plans to catch up with as many as possible of the friends he made while he was a student in Nagoya for six months from late 2010.

He spent time travelling around Japan and visited Tokyo, Osaka, Kobe and Hiroshima. However, he decided to abandon his plans to extend his stay in the country in the aftermath of the Great East Japan Earthquake on 11 March, 2011.

“Winning this competition has given me a little confidence in my writing”, he said. “I love to write poetry but I’ve always kept it rather private.

“This competition has helped me realise that I may have a talent for this and that I should explore more of the haiku world”.