I spent much of July in the UK on a mix of business and leave. Whilst I was there, we got a new Prime Minister, Boris Johnson, and many new Cabinet members. The new Administration has made clear its determination to leave the EU on 31 October, and the whole government system is very focused on delivering this. Members of the British Chamber of Commerce in Japan will recall Boris Johnson speaking at a chamber breakfast when he visited in 2017, when he impressed with his energy and enthusiasm.

I try to visit different parts of the UK to learn more about their links with Japan. Last summer, I had visited Scotland and Wales, so this time I decided to go to Northern Ireland, which has entered the public consciousness this year because of the issue of the “Irish Backstop” in the Brexit context. It’s only an 80-minute flight from London, similar to the kind of hops that Japanese make around the four main islands here. I met a number of Japanese investors there across a variety of sectors: medical equipment, IT, electronic components, aluminium castings and blockchain technology. All were very complimentary of Northern Ireland as a place to do business, with a high-quality workforce and a cost base significantly lower than in most other parts of the UK.

One of Northern Ireland’s strengths is education. Its primary school system is sixth in the world for maths. I visited the two universities, Queen’s and Ulster, and met representatives of a number of further education colleges. All were keen to talk about their links with Japan—from joint research to student exchanges—and were enthusiastic to do more.

I had briefings from the Northern Ireland Administration at Stormont Castle, and was taken on a tour of some of the now very peaceful former conflict zones around inner Belfast, whose names were very memorable from news coverage of the “troubles” before the Good Friday Agreement 20 years ago.

The Northern Ireland Administration also arranged a visit to the famous Giant’s Causeway (above), where the beautiful setting and unique geological feature of hexagonal basalt pillars attract several million tourists each year. The National Trust, who manage the site, told me they’d like to see more Japanese visitors.

Universities and sake in East Anglia

Education was also a theme of a brief visit to East Anglia. I met the Japanese faculty at Cambridge University and at the University of East Anglia’s Sainsbury Institute of Japanese Arts and Culture, both very distinguished institutions in their fields.

Whilst in Cambridge, I visited Arm Holdings, the world-leading semi­conductor design and software firm acquired by SoftBank in 2015. It is on target to meet SoftBank’s commitment to double UK staff numbers.

And, at Fordham Abbey, I visited Dojima Sake Brewery, who are developing a number of Japanese cultural experiences alongside the new brewery.

In London, I joined the programme of Tokyo Deputy Mayor for Financial Services Hiroshi Nakaso, for calls at the House of Lords and the Lord Mayor’s Mansion House. I also visited a lively fintech hub, sponsored by Barclays, in the trendy Shoreditch area, known as the “silicon roundabout”. Fintech is a big strength of the UK, thanks to the proximity of a global financial centre in the City and a range of world-class universities.

Britain was sweltering in its hottest-ever July, with temperatures reaching 38.5C—actually a bit too high in a country where air-conditioning is not the norm. But my travels were a reminder of what a beautiful country it is, from the gently rolling landscapes of my native Devon to the historic Tudor houses of East Anglia. 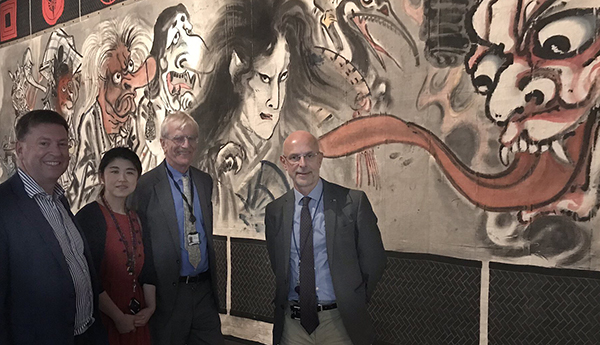 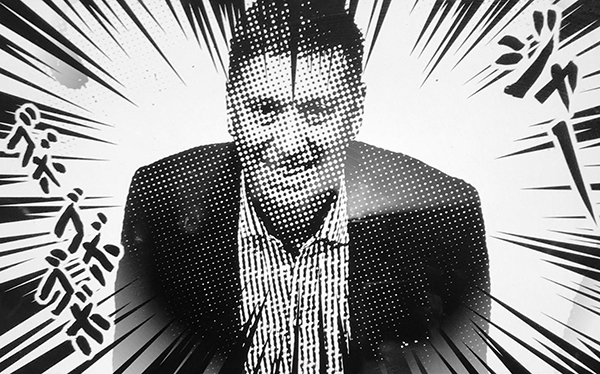 In addition to the usual round of calls across Whitehall, I also checked in with the British Olympic and Paralympic Associations, and the UK–Japan 21st Century Group. Sir Richard Lambert (above centre), chairman of the British Museum, took me on a tour of its current blockbuster exhibition on Japanese manga, which is drawing huge numbers of visitors. And I called on the Director of the National Gallery to talk about the high-profile exhibition they are mounting in Japan next year.

I accompanied a visiting delegation on a trip to the nuclear facility in Rokkasho, Aomori Prefecture, where nuclear waste—reprocessed at Sellafield in North-West England for the Japanese utilities—is stored when it comes back to Japan. The scale and rigorous approach to safety is impressive. I noted that nuclear facilities always seem to be located in the most stunning natural landscapes.

The Embassy is currently preparing for the onslaught of visitors in what promises to be an incredibly busy autumn.

What a year for sport

I got back to Japan just in time to watch Manchester City, who won every trophy available in England last year, playing their sister club Yokohama Marinos. I had just missed Chelsea’s Japan tour. What a year for sport here! In August, we are launching our social media campaign on local customs and etiquette, fronted by Japanese stand-up comedian Yuriko Kotani, aimed at the tens of thousands of British rugby fans who will visit this autumn.