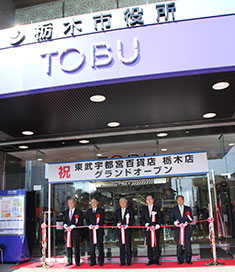 A six-storey complex in Tochigi City houses a department store and government offices.

Outlet malls—featuring shops selling discontinued or off-season items, unsold remnants, returned goods and so on at sharply reduced prices—began to take off in Japan in the late 1990s. In 2005, a second wave of construction began, with outlet facilities springing up in rural areas.


Since 2012, reports the Shukan Economist (6–13 May), Japan has experienced a third boom, involving both the opening of new outlets and the expansion of existing ones.

The nation’s largest developer is Mitsui Fudosan Co., Ltd., with 12 outlets to date. The total sales turnover of all of Japan’s outlet malls in fiscal 2012 reached ¥269.3bn, up 24% over the previous year.

The second-largest developer, with nine outlets, is Mitsubishi Estate-Simon Co., Ltd., a 60–40 joint venture between Mitsubishi Estate and Indianapolis-based Simon Property Group Inc.—the largest publicly traded real estate firm in the US. The venture firm announced that the number of cash transactions in fiscal 2012 rose 9% year on year, to ¥47.9mn.

The outlets’ growth is due to three factors. One is the availability of on-site dining facilities, including quality restaurants and eateries that promote local products.

The second is the strategy to encourage families to pay longer visits by providing amenities such as all-day free parking and leisure facilities, since many outlets are a 60-to 90-minute drive from major urban centres.

From April until June, the Gotemba Premium Outlet in Shizuoka Prefecture tied up with the Izu Ryokan Association to offer special deals on meals and accommodation. The Seibu Group, with a similar plan, appeals to golfers in Karuizawa, Nagano Prefecture.

The third reason for growth is the ability of outlets to evolve according to demographic shifts and consumer preferences. Previously, their merchandise mix had been primarily oriented towards women between the ages of 20 and 40.

One key strategy is to appeal to consumer expectations by offering something new, which is essential if the outlets want to attract repeat customers.

Greater efforts are being made to attract more foreign visitors. With the designation of Mt Fuji as a UNESCO World Heritage Site, the rise in overseas visitors is believed to be a factor in the 3% year-on-year growth in 2013 by the nearby Gotemba Premium Outlet.

Signs have been added in English, Chinese and Korean. In addition to sales staff speaking these languages, the outlet offers a call centre for foreign visitors, should they require language assistance.

The Shisui Premium Outlet in Inba, Chiba Prefecture, is just a 10-minute drive from Narita International Airport. The location has made it popular with foreign travellers, an estimated 47,000 of whom are said to have visited since its opening in April 2013.

In consideration of the growing number of shoppers from predominantly Muslim countries, such as Indonesia and Malaysia, a prayer room has been added at the Shisui outlet. Two malls in Hokkaido have followed suit.

Public–private tie-up
Meanwhile, the Nikkei Marketing Journal (21 April) reported on a distinctive fusion of retail business and government. On 15 March, a new six-storey building that formerly housed the Fukuda-ya department store reopened in central Tochigi City after a three-year hiatus.

The ground floor contains a branch of the Tobu department store. In addition to shops operated by well-known firms, the 125m2 ground floor includes a baby room for changing nappies and breast-feeding.

The remaining five storeys house the city government offices. The Tochigi Chamber of Commerce and Industry is credited with the innovation. 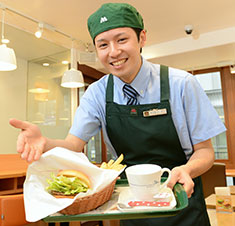 As reported in the Nikkei Marketing Journal (14 May), Mos Store Company, Inc., a domestic hamburger chain with around 1,400 outlets, has announced a new system to address the challenge of recruiting quality staff. Employees will now have a choice of three hiring classifications that will determine the conditions for intercompany transfers.

The classifications, N, A and J, stand for national, area and jitaku (home), respectively. In the case of N status, staff can be transferred anywhere in the country. For those who choose A classification, transfers would be limited to within one of three regions: north Japan, east Japan or west Japan. And in the case of J status, there will be no transfers beyond a 90-minute, one-way trip from employees’ place of residence.

Wage levels are also applied based on the N, A and J designations, in descending order. Of some 350 workers who will come under the new system at 200-plus Mos Burger outlets, an average of 10% chose either N or J status, while the majority choose A classification.

By responding to workers’ needs, the firm is hoping the new policy will encourage quality staff to stay with the organisation. 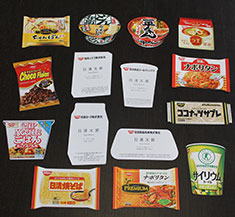 Nissin Foods prints meishi in the shape of its products, such as cup noodles.

Want to make a good first impression? The Aera weekly (28 April) introduced a firm that prints business cards on the surface of biscuits.

Sansan Inc. is a cloud-based business card management service in Tokyo that initiated their kukki meishi (biscuit business cards) operation this year. Through its Link Knowledge system, it organises kukki meishi and other meishi on web applications, and has given equally appealing cards to its own staff to distribute to people they meet.

Sansan spokesperson Eri Isoyama said that individuals from whom her firm’s staff receive business cards are sent an app that introduces Sansan’s service.

“It’s okay for clients to eat the cookie, because the app we send them carries the same data that’s printed on it”, she said.

Nissin Foods took a similar tack last autumn by printing business cards in the shape of the firm’s cup noodles and other familiar products.

Another firm, Cookpad Inc., produced water-resistant cards—with recipes printed on the back—so they can be used in the kitchen.