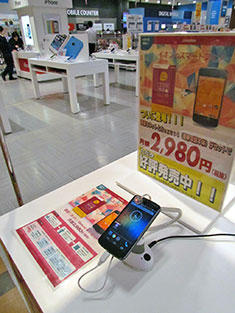 The two top-selling products for the first half of 2014, according to the Nikkei Marketing Journal (11 June), were low-priced smartphones and the Disney animated film Frozen (titled Anna and the Snow Queen in Japan).

The Aeon retail chain sold out of its complete stock of 8,000 smartphones with a subscription fee of ¥2,980 in one month. Frozen has grossed ¥20bn, propelling it to third place for domestic film revenues. Music CDs and other spinoffs have also been strong sellers.

Because the list is drawn up as a sumo banzuke (the stylised ranking sheet issued just before each Grand Sumo Tournament), the above-mentioned items were bestowed with the rank of yokozuna (grand champion).

Other standouts on the list include Nippon Individual Savings Accounts, or NISA, which are modelled after a similar service in the UK, offering five-year deferred taxation on capital gains and dividends; the Aeon mall in Makuhari, Chiba Prefecture, with 360 commercial tenants, one-third of which are “experience-type” businesses that appeal to customers by offering activities, in addition to, or instead of, merchandise; avocado burgers at McDonald’s outlets; halal-certified food aimed at the growing number of tourists from countries such as Malaysia that have large Muslim populations; and noise-cancelling digital earplugs.

Also on the list is Taiwan. The country has been booming as an overseas travel destination, due to Japan’s strained relations with China and South Korea.

A zannen-sho (booby prize) was bestowed on Japan-based low-cost carrier airlines, one of which, the ANA-affiliated Peach Aviation, was forced to cancel some 2,000 flights through October 2014 due to a shortage of pilots.

As to forecasts for the second half of 2014, this year marks a half century since the Olympic and Paralympic Games were first held in Tokyo, and October is expected to see a variety of commemorative events held by the Hotel New Otani, the JR Tokai railway company, which operates the Tokaido Shinkansen, and others.

Other major events predicted in the year’s second half include: 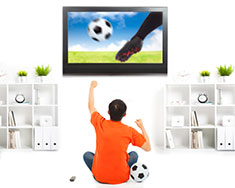 TRICKS OF THE TRADE WHEN TAKING PAID HOLIDAYS

Yukiko, a 40-year-old employee at a public relations firm, openly admits she’s addicted to China. Every year, she delays taking her summer holiday until September, and tacks on a few extra days of paid vacation time—thanks to national holidays—to take a trip of medium duration.

Yukiko is one of the minority of salaried workers who uses her quota of annual paid leave, reports the Aera weekly (30 June). According to the Ministry of Health, Labour and Welfare, an average of only 47.1% of Japanese workers take their paid leave. Most workers tend to make use of national holidays to enjoy their leisure activities.

Four years ago, Saori, age 38, left her boss aghast when she informed him she would take a two-week break to stay home and watch the FIFA World Cup on television.

This year, she took steps in advance—taking no paid leave in 2013, and letting people around the office know beforehand—in order to lessen the shock.

“My colleagues at work might have resented it if I’d gone to Brazil, but if I tell them I will just watch the matches from home, they react by saying, ‘Well if you like football that much’”, she says. “And I stay in touch with the office via my mobile phone and email, so I can be reached if they need me in a pinch”.

General consensus appears to be that the more imposing or spectacular the reason for requesting leave, the more co-workers are likely to accept it without grumbles, Labour Specialist Yohei Tsunemi told the magazine.

Paid leave is every salaried worker’s right, and workers cannot be disciplined for taking it. But it can be a source of friction between bosses and subordinates, or between co-workers, which is why more firms are turning to the Web when asking staff to submit applications for paid leave.

While many workers refrain from sharing details of their private lives with co-workers, the general consensus is that it is better to be more open about their reasons for taking paid leave.

To avoid resentment among her unmarried colleagues, one working mother with a cosmetics firm told Aera that, before taking a holiday, she would explain the details of her family situation and try to elicit their understanding over lunch.

The article also advises readers against fabricating excuses. To take time off due to mishaps, it is not prudent to use an excuse such as “a chicken bone lodged in my throat” or “I fell out of bed and lost consciousness”.

Untruths are sure to be exposed, making the fibber an object of derision. Honesty and openness are always the best policy. 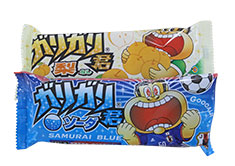 Sales of ice lollipop Garigari-kun could be hit due to abnormal weather.

“Just hearing the term El Niño makes me shudder”, a person in the convenience store trade admitted to Nikkei Business (26 May).

The reappearance of this phenomenon, which generates higher ocean temperatures around the equator in the eastern Pacific Ocean, has in years past resulted in cooler summer temperatures that negatively affect the economy.

“Based on an analysis of the data, in recent years the Japanese economy has become more vulnerable to fluctuations in the weather”, Toshihiro Nagahama, chief economist at the research arm of Dai-Ichi Life Insurance Co., was quoted as saying.

As Japan is dependent on imports for much of its food supplies, weather conditions elsewhere also affect supply and demand pricing. For instance, the El Niño of 2002–03 resulted in a nearly 60% drop in Australia’s wheat harvest, causing prices to rise about 50% compared with prevailing prices at the end of December 2001.

Increased grain prices can affect the production costs of not only bread and udon noodles, but animal feed as well, which can seriously impact the diary industry.

A more worrisome indicator, with possible parallels in 2014, might be events of 2003, when taxes were raised on inexpensive happoshu (sparkling malt beverages), resulting in a double-digit year-on-year decline in shipments of Kirin’s various beer products during the May–August period.

To minimise risk, businesses this year will be reducing their dependence on revenue from summer-related goods and, in some cases, ending their summer sales campaigns as early as mid-July.

In the apparel sector, recent years’ prolonged summer heat, which has stretched into September and even October, has hurt demand for autumn fashion, although this year may be different.