Tokyo has just over six years to uphold its pledge of omotenashi (spirit of hospitality) that helped it secure the winning bid for the 2020 Olympic and Paralympic Games.

The Nikkei Marketing Journal (10 February) recently polled over 100 foreign travellers to Japan, asking what had disappointed or disturbed them during their visits.

Roughly half of the 10 most common complaints were related to food and beverage providers. In descending order, with the number of respective complaints shown in parentheses, they were:

1. Shortage of services in foreign languages (39 votes)
2. Lack of free Wi-Fi compared with other countries (31)
3. Difficulty understanding the shokken (meal tickets sold from vending machines) system widely used in budget restaurants (19)
4. Inability of restaurant staff to explain how dishes should be eaten (17)
5. Cash-based economy that discourages use of credit cards (15)
6. Food portions at restaurants seem small relative to price (12)
7. Many restaurants don’t separate smokers and non-smokers (11)
8. Shops tend to use excessive wrapping for purchases (9)
9. Difficulty withdrawing cash from ATMs or exchanging home currency for Japanese yen (8)
10. General lack of flexibility in dealing with unexpected situations (6)

Other comments related to the language barrier include: “Not enough menus in English. At the very least they should include photos”, (Australian woman, 24); and “There weren’t enough English programmes on television at the hotel, so the kids complained” (Australian man, 48).

However, Fusako Kishino, the operator of a Japanese restaurant in Nikko City, countered, “Even someone who speaks practically no English can find a way to get the meaning across. We’re all human beings”.

In response to the frequent complaint that portions are too small, inbound travel consultant Shigekazu Saito said, “Many restaurants in Japan offer free omori [a larger serving, usually of rice or noodles], but foreign visitors are seldom aware of this. Local restaurants are not usually inclined to go out of their way to inform customers about this service”.

Based on the survey results, the article said a large segment of Japan’s service industry seems to operate on the premise that customers will mainly be Japanese.

In addition to the foreign tourists polled, other visitors said they felt awkward in some situations.

For example, some tourists said they did not like having to wake up early if they wanted to eat breakfast at their ryokan. These individuals felt they should be allowed to sleep late.

The article cites another survey of 300 foreign visitors conducted last year by Visa Worldwide Japan Co. Ltd. Sixty percent of respondents said they assumed that shops without credit card stickers displayed on storefronts or windows did not accept cards for payment.

One shop owner in Tokyo’s Omotesando shopping district asserted that merely displaying such stickers was effective in attracting more customers and increasing the value of purchases.

“Despite the fact that Japanese salesclerks are known for their courtesy, there are still many cases in which they aren’t meeting the needs of foreigners”, said Keisuke Murayama, the president of a travel consulting firm in Tokyo’s Shinjuku district. 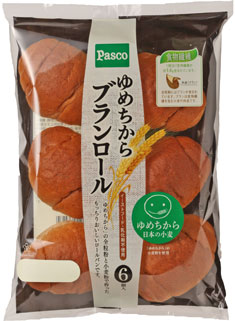 Bread made from Yumechikara wheat

About nine-tenths of the wheat consumed in Japan is imported from the US, Australia and other countries.

However, this is not preventing Japanese firms from promoting their domestic strains. Like the brands of rice that are highly sought after—such as Koshihikari, Sasanishiki and Akita Komachi—popular domestic wheat varieties are also being given their own names.

The most prevalent, reports Tokyo Shimbun (6 February), is a Hokkaido variety called Yumechikara (dream power). The wheat is mainly used to make bread and other baked goods, and 31,189 tonnes were harvested in 2013.

Atsuo Morita, who operates the Shikishima Bakery in Nagoya, swears by Yumechikara, saying it is the secret ingredient that makes his products so tasty. More farms in Hokkaido are starting to cultivate the strain to meet market demand, which more than tripled last year.

A wheat strain produced in Mie Prefecture called Ayahikari is popular as a base for udon noodles. Sanuki no Yume 2009, a variety grown in Kagawa Prefecture, is also highly regarded among udon shops, and the cultivated acreage of the strain has expanded sixty-fold over the past four years.

The price of bread made from domestic wheat is slightly higher than that of products made from imported grains. 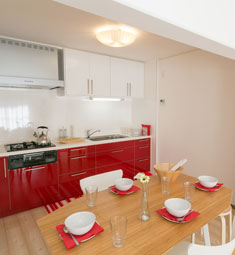 One of the model rooms furnished by IKEA Japan

As reported in the Nikkei Marketing Journal (12 February), IKEA Japan has tied up with the Urban Renaissance Agency to renovate selected units in four suburban public housing tracts.

The renovated units, which feature colour-coordinated furnishings, were put on display as model rooms from 15 to 23 February. Prospective tenants were invited to participate in a lottery to select who would live in the units.

Most public housing developments underwent sharp expansion in the mid-1960s to meet the needs of post-war baby boomers. They offer low rent and are near railway stations that provide links to central urban areas.

However, given the ageing population and declining birth rate, the availability of nearby shopping and other services has begun to wane. Refurbishing the units is seen as a strategy to attract young couples who will help rejuvenate the population base of such housing.

Report: foreign labour may not be enough

In the Shukan Economist (18 February), Yoshihisa Kitai, chief economist at Nippon Steel & Sumikin Research Institute Corporation, has written about the increase in demand for workers in financial services and IT.

The IT boom is due to the massive system and software upgrades that will take place with the nationwide adoption of the My Number system in January 2016.

Kitai highlights the likelihood of a serious labour shortage, with rising wages for temporary and other non-regular staff.

Between now and 2030, Japan’s labour pool is projected to decline by 8mn. One prediction holds that Japan will have to admit more than 3mn foreign workers into the country to fill open positions.

However, neighbouring Asian countries will also face their own labour shortages, making it difficult for Japan to rely on these nations for potential immigrants.

Kitai’s article aims to warn businesses that an infusion of foreign workers will not necessarily solve the nation’s labour shortage.

He notes that Japan has considerable untapped resources for hiring, mainly women. Plus, as the retirement age is raised to relieve the national pension system, elderly people are expected to take up more part-time work.

Pegged to an index of 100, participation in the workforce by those in the 60–64 age group drops to 58 points, and for those aged 65 and over, to about 20—a lower rate of employment among the elderly than is found in many other advanced economies.