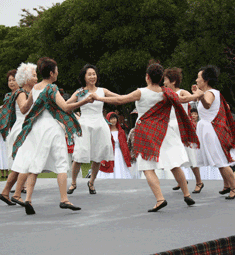 Traditional Scottish dancing was performed by a Japanese troupe.

Organised by the Japan Scottish Highland Games Committee, the annual event consistently draws a sizeable crowd to the university’s Chiba campus. With a turnout of about 1,500 people at this year’s festival, despite the rain that dominated most of the morning, 2012 was no exception.

As one event-goer noted, the miserable weather actually added an air of authenticity to the games.

A familiar event held throughout the year in Europe and North America, Highland games draw numerous spectators across many countries. However, people are generally surprised to find the games held in Japan.

But even more surprising may be the fact that there are so many Japanese participants in the festival’s events.

The Tokyo Pipe Band, which performed on the day, was established in 1974 to commemorate a visit by Queen Elizabeth II to Japan. The band mostly comprises Japanese pipers. 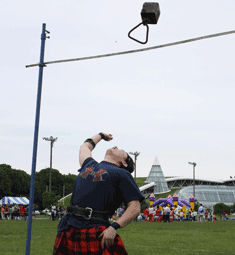 Gary Robertson’s winning throw in the Weight for Height.

The games’ long-reigning heavy event champion is also a local. Kengo Kubota has fended off numerous challenges by Western competitors and until this year had retained his Japan title for around five years.

In 2009, Kubota’s skill led him to compete at the Inverness Highland Games—the world’s biggest Highland games.

The festival this year included all the requisite events for traditional games: bagpipes, heavy events and dance.

Pipers from as far afield as Akita Prefecture and Kyoto took part in the bagpipe performances.

Heavy event participants came from the US territory of Guam as well as the US mainland to challenge an array of foreign and domestic competitors living in Japan.

The heavy event champion was Gary Fujimoto Robertson. It was the American’s debut appearance at the Japan games, and his Japanese-Scottish heritage perfectly highlighted the diverse nature of the gathering.

Food and drink also featured prominently at the event, with whisky, craft beer and traditional dishes available from several vendors.

Moreover, those who thought they would never have a chance to eat haggis, because they are in the wrong country, the Japan Highland Games provided a rare opportunity to indulge in this traditional Scottish dish.