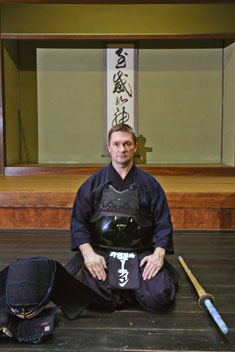 Paul Martin is a fourth dan in Kendo.

From the kissaki tip through the gentle curve of the blade, to the intricately designed tsuba hand guard and hilt, the traditional Japanese sword can be a work of art as well as a fearsome weapon.


For Paul Martin, who grew up in London’s East End, it was seeing the classic 1974 gangster film The Yakuza that piqued his interest in Japanese martial arts and history.

That fascination—and a lot of studying—eventually led him to becoming head of the British Museum’s collection of Japanese arms and armour.

“The Japanese sword has many roles to play other than merely being a weapon”, said 48-year-old Martin, now one of the most respected international authorities on katana (Japanese single-edge swords) in the world. “It has spiritual importance, and is used in religious ceremonies, weddings, funerals and birth rites.

“These swords are important within families and are often handed down through the generations, but collectors appreciate them for the beauty of the workmanship that has gone into them”, he told BCCJ ACUMEN.

“Looking at one of these swords is not like looking at a painting, where what you see is what you get”, he added. “A lot of what you get out of a fine sword is in the eye of the beholder. Some swords just speak to you when you look at them”.

Martin’s rise to prominence in the field of Japanese swords has been an unconventional one. He is a skilled martial artist, three times having been crowned lightweight karate champion of England, and is a fourth dan (out of eight grades attainable) in kendo.

Then, by chance, Martin took a job in 1993 as a security guard at the British Museum.

Studying Japanese in his spare time, he began to speak with Japanese visitors to the museum and take a closer interest in the items that made up the Japanese collection.

When a curator’s position came up, his enthusiasm for, and knowledge of, the subject sealed the decision in his favour.

The museum has around 250 Japanese swords, the vast majority of which were donated by a single British collector who lived in Japan in the Meiji Era.

A number of the items stand out, Martin said, including a 15th century dagger made by Kanefusa that was a present from Emperor Meiji to Lord Redesdale after the English lord had witnessed a seppuku, or ritual suicide by disembowelment.

Another valuable item in the collection is an 11th century tachi blade, a type of sword used by samurai. It was forged in what is today known as Okayama Prefecture by Yoshikane, a well-known swordsmith.

Some of the best collections of Japanese swords outside the country are held at the Metropolitan Museum of Art in New York and the Museum of Fine Arts in Boston.

Martin considers himself fortunate to have been able to study under Victor Harris, at the time the only Japanese-trained sword specialist in the UK and the head of the former Japanese Antiquities department at the museum.

Inspired by his mentor, Martin studied the Japanese language, martial arts and swords even more diligently.

Martin still works for the British Museum, on a project basis, but realised that he needed to be in Japan on a more permanent basis to study. He spent six years here before recently completing a two-year Master of Arts in Asian Studies at the University of California, Berkeley.

Based in Japan once again, Martin is acting as a consultant to overseas collectors of high-quality swords, the majority of whom have great admiration for the items but are unable to speak Japanese.

He is also busy writing books, producing DVDs and appearing on television documentaries about Japanese weapons and history, including programmes for the Discovery Channel and the History Channel.

Another independent DVD project titled Forgive, Don’t Forget follows the efforts of the son of a former US serviceman as he tries to trace the original Japanese owner of a sword that his father took back to America as a souvenir after World War II.

“My main aim is to introduce Japanese swords to the rest of the world, from the Japanese perspective”, Martin said.

“In doing so, I hope to help ensure that antique swords are cared for and preserved both in Japan and abroad, but I also want to promote the dwindling number of craftsmen in Japan who make these remarkable pieces and to try to support their traditional crafts for future generations”.

Of the some 300 swordsmiths who are active in Japan, around 80 are carrying on the work of their forefathers full time. Their work—interrupted in the years right after the war, when the occupation authorities outlawed anything that was considered militaristic—had been revived by 1954.

“I really want to act as a bridge between Japan and the West, showing all the workmanship and generations of skills and knowledge that have gone into these blades”, Martin said. “In that way, I hope more people will have an even better appreciation of these craftsmen’s work”.