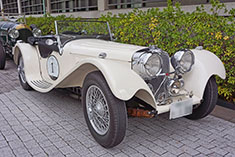 Fondly remembered for their quirky designs, innovation and oil leaks, many antique, vintage and modern-classic cars are much sought after by eccentrics, investors and Anglophiles in Japan. This seems ironic, given that in many ways Japan helped to both destroy and modernise the UK car industry.

In tribute to this special relationship, on 14–15 March about 40 preserved or renovated British classics of many sizes, ages and types gathered for the inaugural Great British (GB) Rally in Tokyo.

Ambassador Tim Hitchens CMG LVO told BCCJ ACUMEN, “It was a pleasure to wave the starting flag for this year’s GB Rally at the British Embassy Tokyo and great to see so many British classic cars here, displaying timeless British designs that have not lost any of their charm among Japanese audiences”.

He said it was no coincidence that so many of the recognisable cars from the classic era were made in Britain, owing to the UK’s long and prestigious association with the automobile industry.

Traffic stopped, commuters gawked and a curious crowd gathered to see off the convoy on its two-day road trip through Izu, Hakone, Shonan and Oiso-machi in Kanagawa Prefecture. The auto parade’s last stop was Tokyo Station.

In the year of the 160th anniversary of the Anglo-Japanese Friendship Treaty, explained an organiser, the circular route had been carefully planned to feature favourite spots for British travellers in the Meiji era.

“It’s from this history that the UK has earned its continued leadership in automobile innovation, design and manufacturing—today a globally recognised leadership that continues to attract other manufacturers to base themselves in the UK and forge major industry partnerships, most notably those between the UK and Japan”, said the ambassador.