Hugh Bonneville pleads with a laugh, “Please stop sending me marmalade, I have a larder full of it”. Following the success of the first Paddington film, he has constantly been given the eponymous bear’s favourite indulgence as gifts from well-intentioned fans, friends and family. I met up with Bonneville at a Tokyo hotel in January (sans marmalade) to discuss the second instalment of the Paddington films based on the children’s books by Michael Bond CBE. 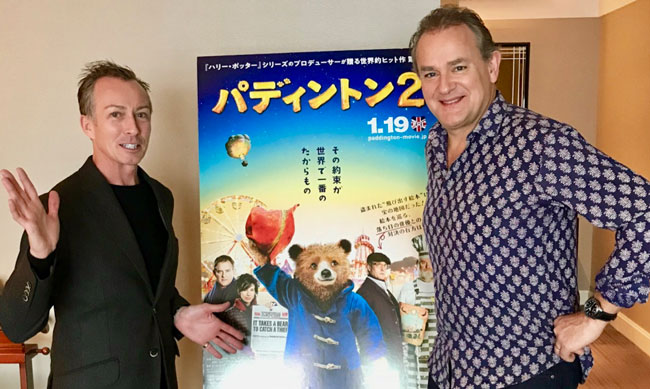 For those who haven’t seen the films or read the books (very un-British of you!), Bonneville plays Mr Brown, the father of the family who unintentionally adopt the bear from Peru, when they find him alone and lost at London’s Paddington station.

The first film adaptation of Paddington, released in 2014, was a runaway success, with worldwide box office takings of $268mn. Paddington 2 seems likely to follow suit and, possibly, be even more successful.

This is big business and good news for the British film and entertainment industries and, no doubt, will have a knock on effect on tourism, too, the films painting London in a gloriously romanticised light. Watching Paddington 2 did make me want to instantly book a flight to the capital and explore the iconic locations that swept across the big screen.

Soft spot
For our interview I am ushered into the hotel suite and find Bonneville in face make up following a series of on-camera interviews. Now it is my turn and he seems positively relieved that I have just a handheld microphone—no crew, no translator and no fuss. He instantly breathes a sigh of relief, and gives me a genuine, warm welcome.

It was Bonneville’s first visit to Japan and he was thrilled to be here. As well as the Paddington 2 media junket he also took time out with his wife to enjoy the sights. He said, “I am having a cultural explosion in my head doing all the cliché Tokyo experiences for the first time visitor, including a tea ceremony and managing to wangle some tickets for the sumo”.

Bonneville has a soft spot for the Paddington stories. He was born at St Mary’s Hospital in Paddington, where his parents were both training in the medical profession, and he read the Paddington books as a child. Talking about when he was first offered the role, he said, “I was a bit nervous to be honest, because if you’ve grown up with a character that’s very vivid in your imagination, you have a sense of ownership.

“You think some big shot producer is going to ruin it on the big screen, but then three things came into play: I started reading the script and I was laughing on the first page; then I had a meeting with Paul King, the writer and director of Paddington, and he’s as round and furry and charming as the bear himself; and then the third element—the producer—if anyone’s going to take a much-loved character from children’s literature and turn them into a movie, it’s David Hayman, who produced the Harry Potter films with such great success and care”.

Bonneville has good words to say about his co-star Hugh Grant, too. When I asked him about teaming up with Grant—“the two Hughs” as he called them—after a 19-year gap following their roles together in the film Notting Hill, he ribbed his friend and colleague saying, “Hugh has made a career out of complaining about the shortcomings of his abilities as an actor and how miserable he finds the filming process and how the whole thing is too stressful and ghastly.

“There’s sardonic humour in there, but he is a remarkable comedian and I think this particular role has showed his comic chops to great effect. He has sent himself up so brilliantly in this movie and I’m genuinely thrilled he’s been nominated for a British Academy Film Award”.

Bonneville stressed that filmgoers should stay until the end of Paddington 2 when the credits roll to see Grant at his best, describing it as one of the film’s highlights.

The right tone
Bonneville admits that Paddington 2 is unashamedly feel-good with a warm heart.

“Take your inner child with you”, he said. “Whether you’re a kid of eight or a kid of 88, it works. It’s openhearted, it’s warm, it’s funny, it’s quirky, it has no malice, no cynicism and isn’t cloying. It’s a tightrope to walk, but that tone has made it appeal across the generations”.

Well I’m in need of a cheerful end to the day and am off to bed to reminisce about Paddington bear. Just as when I was a child, I’ll probably lie there craving marmalade, too. Perhaps I should contact Bonneville and ask him to send me a supply from his well-stocked larder.