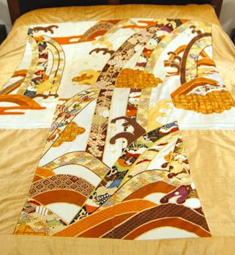 Old silk kimono and obi are turned into home furnishings and bags.


A British entrepreneur is giving a new lease of life to vintage kimono and obi (sashes) by turning them into eye-catching items of clothing, bags and home furnishings, while at the same time helping some of the people worst affected by the 2011 Great East Japan Earthquake.

Originally from London, Joanne Wilkinson grew up in Kingston upon Hull, East Yorkshire and first arrived in Japan 21 years ago. She spent her first two years in the country doing a variety of part-time jobs and studying Japanese before working for a number of local firms for three years.

While her latest venture, Vintage Kimonos, is wildly different in scale and scope, 47-year-old Wilkinson believes that many of the skills she learned in the world of big corporations can still be applied to smaller concerns.

“I am funding the start-up of the company myself, as well as setting up the supply chain, the manufacturing operations, the website, retail sales and so on”, Wilkinson said. “The company will not employ me. Once it is up and running, it will be managed by Sanna Garton, whom I met through one of the many people who has given me help and advice while I have been setting up the company”.

Established last November, the firm reworks into appealing new items old silk kimono and obi that are in good condition—which most are, because often they have been cared for by generations of the same family.

Attracted by the colours, designs and quality of the fabric used in the making of traditional Japanese clothing, Wilkinson realised its potential and has created unique ladies’ evening bags, table runners and even quilt covers and bedspreads.

“We only started the business in November, but we completed our first sale in December and have since sold [our products] at two vintage fashion fairs in the UK”, she said. “At the moment, we only employ two people and I am in the process of hiring more staff and outsourcing some of our manufacturing to existing clothing manufacturers in Tohoku”.

The events of 11 March, 2011 have played a significant part in the evolution of Vintage Kimonos.

“I was on the 20th floor of the old Dell offices in Kawasaki when the earthquake struck”, she said. “It was terrifying. Bits of the ceiling were falling down and all the cabinets were falling over. I was desperate to know where my kids were.

“I was out of the building like a shot after it stopped shaking and home in 20 minutes”, she said. Luckily, her daughter Rossalyn, now six, and 5-year-old Douglas were already home from their kindergarten.

Wilkinson took part in a wide range of charity events at Dell, and through the British School in Tokyo, assisted the victims of the disaster. However, she wants her new venture to provide longer-term assistance to those who need it most.

“I would like the company to succeed and help—albeit in a very small way—rebuild the local economy”, she said.

“I would really like it to provide a long-term source of funding for projects to help local communities, especially children”, she said.

A percentage of the firm’s profits will be donated to schools and orphanages in Tohoku, while Wilkinson plans to meet officials from cities and prefectures throughout the region to identify the most urgent needs and then try help meet those needs.