Whether they are enjoying a quiet drink after work or staging their long-planned wedding ceremony, Japanese people want a sense of place and authenticity in their venue. That’s where Sue Anamizu comes in.

For 40 years, the founder of European Connections Ltd. has been importing to Japan items that, for most Britons, may be everyday. Here, however, they are used to recreate that feeling of being in a remote country pub in the West Country or attending a wedding in a Yorkshire market town. 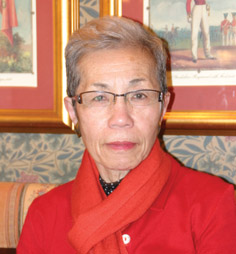 Anamizu, age 70, has recently found a demand for stained-glass windows and says that, while they are delicate and must be handled with extreme care, they are nothing like as tricky as taking apart an entire church and numbering each part of the building, loading it into 40 shipping containers, and shipping it half-way around the world and then reassembling it.

“Japanese people really do like to have original things rather than copies, and I was supplying old church pews and other interior items to wedding chapels in Japan because the most important thing for them is that they are authentic”, said Anamizu.

From pews, she took on the more daunting prospect of importing whole churches—three in total—that had fallen into disrepair in Scotland and Yorkshire. Each one cost about ¥2bn to dismantle, import and rebuild in accordance with Japan’s strict regulations on earthquake resistance. Back in the 1980s and early 1990s, that figure was not insurmountable, Anamizu says, and the wedding firms that purchased the churches will have got their money’s worth out of them.

A similar approach was used with a series of British-style pubs.

Anamizu’s first project was The Cardinal, on the ground floor of the Sony Building in Yurakucho, but she later teamed up with a subsidiary of brewing giant Suntory Liquors Ltd. to design and fit out the Rose and Crown chain of pubs across the country.

“I went to England with a senior manager of the company and we visited many pubs”, she said. “We had to find a design that would work on the ground floor of a new building that was being built in the Shimbashi district and also figure out how much would be for sitting and how much for standing—as you know, Japanese like to sit and drink while the English prefer to stand”.

There were questions to be answered about bar stools, the pictures on the wall, statuettes, the wallpaper and the best use of cut glass dividing panels. All of which fell to Anamizu.

“The authentic atmosphere is the most important thing in attracting customers”, said Anamizu, indicating framed prints of Victorian-era soldiers and etchings of the River Thames. “This place is very different to a Japanese restaurant and if it is modern then people would not come in.

“Japanese people do not go into bars that are bare and bright, like a hospital, because there is no atmosphere and it is impossible for them to create one just like that”.

Anamizu first felt an affinity with traditional British design when she was a student at the University of London and living in Wimbledon. She later joined Nomura Securities Co., Ltd. and met a client who became interested in having her own English-style pub in Tokyo, but it had to be made in Britain in the same way as local pubs. The result of that collaboration is The Cardinal.

Since then, Anamizu has designed the interiors of about a dozen pubs as well as the interiors of 20 hotels in the Monterey chain, from Art Deco style to arts and crafts. Another is planned for Okinawa. She also ran the Ivy antique shop until five years ago, but has focused more recently on importing stained-glass windows. One project—the installation of a five-part, 6-metre-tall set of windows dating from 1890 in a church near Nara—carried a price tag of £80,000.

Anamizu believes she is giving a new lease of life to churches and traditional pub interiors that are quickly disappearing in the UK.

“Traditional Victorian-style pubs are going in Britain now and they’re being replaced by chains that are big, soulless and simply serve cheap drink”, she said. “I think that’s very sad”.