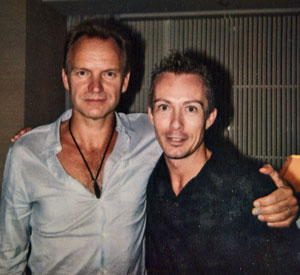 “I hate beginning a song, the middle is only slightly less painful … Facing a blank page is a big risk”, quite shocking words from one of the world’s most prolific and successful songwriters. So said Sting when we met at a Tokyo hotel back in 2003 to discuss his music. However after a pause he did add, “Finishing a song is quite wonderful”. Whew!

When I think of some of the poetic lines he’s penned I don’t imagine someone sweating over a blank page. Take for example those in Love is the Seventh Wave; Be Still My Beating Heart; If You Love Someone Set Them Free; Walking on the Moon and The Bed’s Too Big Without You. Even the world’s most romantic stalker song—Every Breath You Take—has a lyrical beauty.

When asked about the word love and whether it’s personal or a bigger love he’s talking about, Sting answered, “Love is a word that constantly needs to be redefined to maintain its power. We need to re-emphasize love, understanding, compassion, education and kindness. Those simple gestures that can change the world”.

Love is not the only topic Sting has captured in music and in conversation. He has always been concerned about the environment and the state of the world.

“I don’t separate the environment from politics. It’s the same problem. It’s created by imbalances of resources, economic power, military power”, he said.

He is well aware that he is a pop star and not a politician, but hopes his music can have some value.

“My forum is my songs, it’s where I have some expertise. Trying to put some meaning into a pop song makes me feel as if I’m not wasting my time”.

Enjoying music is never a waste of time, and Sting has been entertaining us for almost 40 years. I was a fan of The Police in my teens and remember in 1981 Tony Blackburn announcing on BBC Radio 1 the Ghost in the Machine album going to number one in the UK charts, their third successive album to do so. Early Police always takes me back to those times with my school pals when our turntables and hairstyles were inspired by this trio of blonde, spikey haired new wave stars.

So meeting Sting was quite a moment for me all those years later. He was a gentleman and very quietly spoken. I am forever grateful for the roads my radio career has taken me down and for the people I’ve been privileged to meet. I’ve wanted to interview all three members of The Police for many years and managed to complete the second part of the equation in 2008 when I spoke with guitarist Andy Summers. That’s another story that I’ll share with you one day. I’m yet to meet Stewart Copeland, one of the world’s most incredible drummers.

I’m sure a number of people reading this magazine are legal aliens who like to take tea. And so you might relate in part to the lyrics in Sting’s Englishman in New York, which was written about another very British icon Quentin Crisp. It’s one of the most requested songs on my radio programme and always gets a nod of approval whenever I play it on the air or at events. It hits a certain spot with people and I get a raft of messages and smiles whenever it’s played, proof of the talent of a great wordsmith and songwriter.

And so we get back to the difficulty of writing songs. Sting writes the music first and believes if it’s structured correctly it begins to tell a story. That abstract narrative is then translated into something people can understand. He compares his music to mini operas with characters. He feels like a dramatist, preferring not to write confessional songs but instead is rather “more interested in writing about other peoples problems”.

He said it is the most painful thing to write music, so he consciously plans long tours to avoid writing as much as possible. And he admitted that walking out on stage with 20,000 people pleased to see you is a wonderful feeling “that’s incredibly hard to give up”.

His pain is our pleasure. Sting has been performing live in Japan since 1980 and noted, as with many international artists, that this country is an important destination, not only economically but also on a deeper level. He said the Japanese people “understand” his music. His final comment in our conversation is another thing I’m sure readers of this magazine will relate to. It was also about Japan: “I hope to keep coming back. Keep inviting me”.