There was palpable excitement at the opening reception for the 31st Tokyo International Film Festival (TIFF) in October as the star of the day, English actor Ralph Fiennes, arrived and started greeting fans and the press.

I was on the red carpet at the Roppongi Hills Arena reception in the press zone and—as Fiennes got closer—you could hear the murmur and feel the buzz of anticipation.

Fiennes is currently one of Britain’s greatest actors, having had his first major success with Shakespeare productions at the National Theatre. He has been nominated for the world’s most prestigious awards in theatre and film for his prolific work.

Whether you watched him as a Nazi war criminal in Schindler’s List, or as Count László de Almásy in The English Patient, or as Lord Voldemort in the Harry Potter series, as M in James Bond films, or as numerous other characters, Fiennes would no doubt have had an impact on you even after you had left the theatre. That impact which films have on us was something I was keen to ask him about when my turn came on the red carpet.

Fiennes’ most recent release, The White Crow, tells the story of legendary Soviet ballet dancer Rudolf Nureyev and his famous defection to the West—the first such defection of the Cold War. The film sees Fiennes pulling double duty as director and actor in a supporting role and was one of the headlining features of TIFF 2018. Fiennes was at the opening reception and attended the screening, which was the Asian premiere, to take questions from the audience.

Looking dapper in dark blue suit and a sea captain’s beard, he greeted me with a cautious smile and firm handshake. Regarding directing The White Crow, I asked Fiennes what it was like being on the other side of the camera.

“It wasn’t my first time, it was my third time, and it was good. It’s always a challenge, but I had a wonderful cast. One of the challenges is trying to recreate ballet—to film ballet and recreate ballet of the 1960s working with Russian and French actors, wonderful actors in fact—so it was an ambitious project”.

I asked if he was happy with the result? “I am,” he confirmed.

The White Crow is a film about one of the greatest dancers the world has ever seen and focuses on the dramatic chapter in Nureyev’s life when, in 1961 at the age of 23, he defected to the West while in Paris for a tour with the Mariinsky Ballet.

I asked Fiennes what specifically did he want to tell from this incredible true story? “It’s really about the youth of Rudolf Nureyev and his deter­mination and hunger to realise himself. It’s a story of self-realisation”.

And why did Fiennes want to make this film?

“For the same reason. Because, as an artist trying to will themselves to be the best that they can be, I think that can be a parallel for sports people or writers or musicians—to try to excel in a very specific field. And even though everyone is not a ballet lover, I still think that Nureyev’s character is very compelling”.

Back to the idea that films have an impact on us, and when we walk out of the theatre we are changed, I asked what Fiennes thinks people will take away from this story? “The cost of what it is to be an artist”.

I wondered if Fiennes is still paying that price himself?

“You have to pay a certain price, you have to give of yourself for what you want to do. You have to give up certain things. I think, to excel in any field, that has to be your main aim, sole aim. You have to live and breathe that thing all the time, nothing else”.

My time with Fiennes on the red carpet was up and our conversation ended with him commenting about being back in Tokyo. “I’m very happy to be here. I love Japanese culture and I love Japanese films. I was here 20 years ago; we brought two Shakespeare plays”. And I asked: Can we see you back on stage in Tokyo again? “I hope so!” Fiennes said, this time with a beaming smile. Considering this artist’s passion and prolific output, it won’t surprise me if we do. 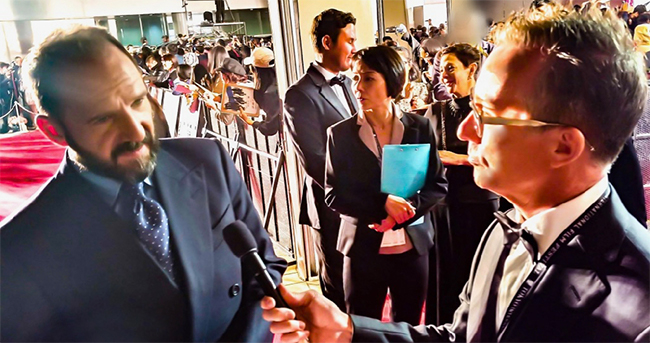