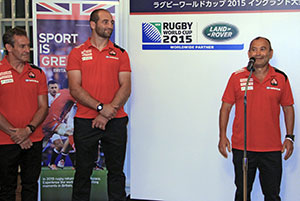 The Japan national rugby team received a rousing send-off at the British Embassy Tokyo on 28 August, a little over two weeks before the Rugby World Cup (RWC) 2015 kicks off in London. And with the clock ticking down to the first game of the tournament, everyone is focused on the task ahead.

There are hopes that a partisan home crowd combined with some skilled and experienced players might see one of the British sides lift the Webb Ellis Cup after the final at Twickenham Stadium on 31 October.

For Japan, drawn in Pool B with some of the biggest names in the sport, including South Africa, Scotland and Samoa, the immediate challenge will be to emerge from the group stages and see which team they tackle in the knock-out rounds.

The luck of the draw—or the lack of luck—means that England and Wales will not face Japan in the early stages of the tournament. On 23 September, however, Japan will be relishing their second match of the RWC, against Scotland at the Kingsholm Stadium in Gloucester.

Underlining the increasing popularity of rugby in Japan, the embassy reception was attended by no fewer than three serving cabinet ministers, a former prime minister, a senior member of the Japan Rugby Football Union (JRFU) and the three senior coaches of the Japan national team.

“Legend has it that in 1823, during a game of school football in the town of Rugby, a young man named William Webb Ellis picked up the ball and ran towards the opposition’s goal line”, said British Ambassador to Japan Tim Hitchens CMG LVO. “Two centuries later, rugby football has evolved into one of the world’s most popular sports, with millions of people playing, watching and enjoying the game.

“At the heart of rugby is a unique ethos, which it has retained over the years”, he added. “Not only is the game played according to the laws, but within the spirit of the laws.

“Through discipline, control and mutual self-respect, a fellowship and sense of fair play are forged, defining rugby as the game it is”.

Hakubun Shimomura, minister of education, culture, sports, science and technology, said he anticipates that the RWC 2015 will be a resounding success, in part thanks to the know-how developed as a result of the UK having hosted the Olympic and Paralympic Games in 2012.

Tadashi Okamura, president of JRFU, said a great sense of anticipation is building ahead of the first game and expressed hope that the tournament will “surpass expectations”.

“I am also pleased to be able to inform you that rugby continues to grow in popularity in Japan and around the world, where the sport is now played in more than 100 countries and will be in the next Olympic Games”, he said. “This tournament, in the home of rugby, is a wonderful chance for all of us who love this sport to return to the basics and look to the future”.

The Japan team, which will also face the United States in Pool B, is being led by Eddie Jones, the Australian national who played as a hooker but has had even more success as a coach, including spells with Tokai University and Suntory Sungoliath. Assisted by forward coach Steve Borthwick, and Leigh Jones, who overseas the training of the defence, Jones took over as the national coach in 2012.

“England and Japan have a very close relationship in rugby”, Jones said, pointing out that Keio University is home to a statue of William Webb Ellis. “Every time the boys went out to training, they bowed at that statue, and every time, as they came back in at the end, they bowed again—if they had the energy”.

Jones said Japan’s target in the upcoming tournament is to reach the quarter-finals and “to show the world that Japan is a serious rugby-playing nation”.

Jones and the team are setting their sights high, given that each of the Japanese players are giving away an average of 7kg to their opponents, as well as an average of 5cm in height.

Hitchens pointed out that the RWC will next be hosted by Japan in 2019, adding that the UK stands ready to offer advice and assistance for the first tournament to be held in Asia.

“In 2014, the UK and Japan signed a Global Sports Host-to-Host Agreement to share our experiences on major sporting events, such as the Olympic and Paralympic Games and the Rugby World Cup”, he said.

“We have made a good start with our cooperation on the Olympics and, despite issues around the national stadium, I firmly believe UK companies have a lot to offer in the planning, preparation and delivery of Tokyo 2020.

“We all know that those who play together work well together, and we hope that even as our respective teams will face each other as opponents on the rugby field, their example of fair play will bring our countries even closer together as partners off the field”, he added. 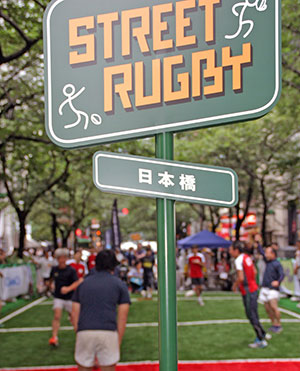 The matches were played on artificial pitches.

Some 87 teams registered for the first street rugby event to be held in Japan, with male and female players of all ages taking to a pair of artificial pitches laid beneath the trees that line the street. Even the nearly constant drizzle—a very British touch to the proceedings—didn’t put the players off their stride.

A recent innovation to the game, street rugby is a form of touch rugby that involves teams of three players on a field just five metres wide, with a try line and red scoring zone at one end.

A try is scored in the traditional way, with the ball being grounded beyond the try line, but the tackling that dominates the full-scale game is replaced with a touch on the attacking player. When touched, the attacker must halt, touch the ball to the ground and start a new attack. If the attacking team has not scored after being touch-tackled three times, they lose possession and the opposing team has an opportunity to attack.

The sport is arguably faster than the full-scale game and requires a fleetness of foot and mind to break through the opponent’s defence. 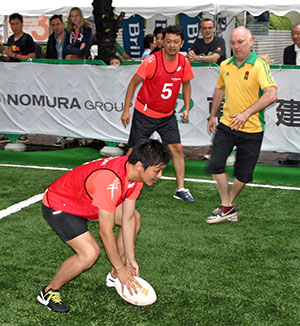 The matches were played on artificial pitches.

Several of the players playing in the shadow of Nihombashi’s skyscrapers were clearly bringing their skills in the full-scale, 15-a-side game to a smaller pitch and demonstrated some impressive handling and swerves to reach the try line.

“The organisers got in touch with us to see if our members would be interested in getting involved because of the up-coming Rugby World Cup in England”, Graham Davis, a member of the British Chamber of Commerce Executive Committee, told BCCJ ACUMEN.

“We have been happy to work with The British School in Tokyo and our members, as well as with other chambers of commerce of rugby-playing countries to give the sport here a boost.

“Rugby has its niche in the Japanese sporting arena, but it really needs to reach out and broaden its appeal here”, Davis said. “Street rugby is a brilliant way to get more people involved, including women and young children”.

While Davis said he knew little about the game before he attended the Nihombashi event, he said he was “very impressed” at the skill many of the players showed.

“Events like this provide more people with a level playing field, and if the organisers can repeat this and keep it going in the years to come, then it will help to build momentum for the sport here.

“People will look forward to it, you will attract more people and that can only be good for the sport as Japan prepares to host the Rugby World Cup”, he said.

After the UK plays host, the tournament will make its first foray into Asia by being staged in Japan in 2019. And there are plenty of people and organisations looking forward to that already.

“An event like this attracts players of all age groups and levels, and we are just very keen to be able to support a grass-roots movement like this in the run-up to 2019”, said Nao Udagawa, marketing communication manager for Jaguar Land Rover Japan Ltd.

“I believe there is a lot of new interest in the game throughout Japanese society, and I’m sure the world cup in England will push that further”, he said.

“And although my heart says Japan can win, I work for a British company so I would be very happy if England won as well”, he added.