World-class sevens returned to Tokyo on 31 March and 1 April, when the International Rugby Board (IRB) brought Round 7 of the Sevens World Series to Japan.

Following an 11-year hiatus of Sevens World Series play in Japan, 16 of the world’s top teams showed why the sport will join the Olympics beginning in 2016. They thrilled a good mix of locals and non-Japanese with a breathless display of pace, power and fitness.

Australia walked away with top honours following a pulsating 28-26 win over Samoa, thanks to a touchline conversion from 19-year-old Matt Lucas in the final seconds.

Played in front of a boisterous crowd of 12,686, the final, however, was in marked contrast to the first day. 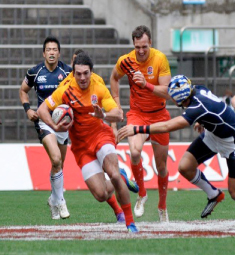 England beat Japan 15-5, before losing in the semi finals.

Sevens originated in the Scottish Borders, but even the hardy folk of Melrose and Hawick would have baulked at playing rugby in the conditions that greeted the players on the first day.

Gale-force winds, rain and a wintery chill not only saw a barren stadium but those who did brave the elements saw little in the way of top-class rugby.

“It’s quite horrendous out there. You just can’t imagine. It’s the worst conditions we have played in for years”, Welshman Dai Rees, who was coaching the Hong Kong team, told BCCJ ACUMEN.

Rees’ side almost upset Australia in their opener, going down 17-14, while Samoa only just pipped Portugal 21-20. But the longer the tournament went on, the better the weather and the better the rugby.

After beating Japan 15-5, England finished the first day on top of their pool, as did the Welsh. But neither side was able to build on that on the second day, with Australia taking care of Wales in the quarter finals (21-14) before hammering England 33-12 in the semi finals.

Despite a poor first day which saw them winless, Scotland rebounded on the Sunday to eventually lift the fourth-tier Shield, beating Kenya 26-12.

“We had some disappointing games during this tournament, but we are happy with the way we finished”, said Scotland’s Mark Cairns.

“Yesterday, the weather was horrible, but the tournament has been well organised and the crowd has been great. The fans have been great and I really think if the weather is nicer, we’ll probably get a bigger crowd next time”.

Of course, sevens isn’t just about the rugby. 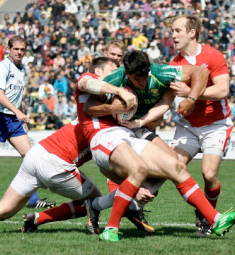 “Sevens is a festival just like the World Cup”, said Kit McConnell, the IRB’s head of Rugby World Cup.

With Japan set to host the Rugby World Cup in 2019, the local and international organisers are also hoping the Tokyo Sevens will help generate greater interest in the sport, both in Japan and beyond.

As some fans noted, however, the Japan Rugby Football Union (JRFU) still has a way to go before it understands what internationalism truly means.

Even McConnell admitted that he had no idea who was winning certain games as all the information on the scoreboard was in Japanese.

But the general feeling was that, for a first attempt, this wasn’t a bad effort, even if things were a little too formal at times and the lines for food and drink a little too long.

Fancy dress was the order of the day for many of the fans, the rugby was superb and the camaraderie among the different nationalities wonderful to behold.

Now, if only the JRFU can do something about the weather next year …