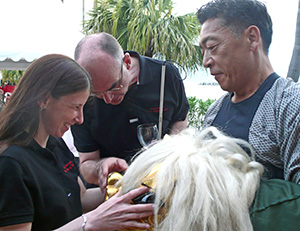 Victory in the intensely fought IFDS Blind Sailing World and International Championships 2013, held in Japan, has served as a springboard for the Great Britain team, now preparing for the next championships in Chicago on 9–13 September.

In races organised by the International Association for Disabled Sailing (IFDS) held over five days at the Seabornia Yacht Club in Kanagawa Prefecture, the British sailors defeated teams from Australia, New Zealand, Canada, the United States and Japan to claim the top accolade in the sport.

Skippered by Sharon Grennan, the British B1 team lifted The Colin Spanhake Trophy. The B2 team, skippered by Lucy Hodges, also placed first, while the B3 boat, with Liam Cattermole at the helm, came a close second to the New Zealand boat, helping to seal the Squadron Cup for the team.

“I can’t really believe that we did so well and that my boat won at my first world championship event”, Grennan told BCCJ ACUMEN.

“All of the training leading up to the event paid off and this is the first time that GB has won medals in all three categories and won the B1 trophy”, she said.

In the two years since that victory, Team GB have been busy honing their skills and keeping up to date with regular changes in race rules. Meanwhile, the publicity that the wins received has also attracted a new group of people with visual impairments who want to enjoy an active outdoor lifestyle.

“We have seen an increase in the number of younger people interested in taking up the sport, which is great news for us”, Grennan said. “We are training hard and learning from each other”.

A selection weekend for the team was held in April ahead of the competition in Chicago, with places for 12 people on the three boats up for grabs.

Grennan works in London as a practice development lawyer for Freshfield Bruckhaus Deringer, and has been sailing for only five years, making her one of the least experienced sailors on the team.

Prior to the 2013 championships, she sailed with Blind Sailing UK, attended a series of selection weekends held in 2012 and took part in intensive training and regattas with the GB Paralympic squad to get race experience in her team. 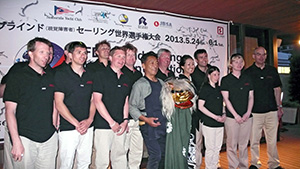 The Great Britain team enjoyed a cultural experience at the event.

Grennan, who was born with poor eyesight that deteriorated when she was a teenager leaving her with only light perception, has to use a different set of skills to sighted sailors.

“As a blind sailor, I am reliant on feeling the wind direction on my face, listening for the sails flapping, and feeling the heal of the boat and the pressure on the tiller”, she said.

“I can’t see the shape of the sails or the tell-tell ribbons, the wind direction indicator on the mast or patterns of approaching wind on the water”, she added. “Sailing in fleet racing with a sighted crew requires a lot of skill and teamwork for the sighted tactician to communicate wind patterns, the course, tactical manoeuvres and so on”.

Sailing conditions on Sagami Bay over the five days of the event ranged from light wind and flat water to strong winds with accompanying substantial waves. Racing was cancelled on one day because conditions were too rough.

“The home team had the advantage in the lighter wind conditions at the beginning of the regatta, but the GB team coped particularly well with the stronger wind conditions, because our only training in J24 keelboats had been in strong wind in Weymouth”, Grennan said.

Lake Michigan, the location of the 2015 championships, is likely to offer different conditions for the team to manage. To be held at the Chicago Yacht Club, the event will bring together some 20 teams from over the world, promising the British team another cultural experience.

Speaking of the Kanagawa event, Grennan said, “this was my first trip to Japan”, adding that the people were welcoming and the destination and food both interesting.

“It was a little daunting getting around and ordering food in restaurants without speaking any Japanese, but we seemed to manage with the generous help of local people who would step in to help interpret or offer other assistance”, she added.