Alan Curr is in the curious position of attempting to do such a good job that he is making himself redundant.

The project manager for the Cricket Blast programme is tasked with training local officers to take a sport, still in its infancy here, into elementary schools and show children just how much fun the game can be. From there, youngsters will be encouraged to join fledgling clubs or even set up their own one and, ultimately, form a team that can do Japan proud in international tournaments.

And that is not such a far-fetched ambition, given that Japan’s men’s team is presently ranked 43rd in the world in the 50-overs game, while the women are impressively in the 13th spot globally for the T20 format.

But, with only two colleagues and an entire country to educate in this quintessentially English game, Curr’s job is probably safe for a little while yet.

“Team sports here are dominated by baseball, football and rugby, with many youngsters not even finding out about cricket until they get to university, and by that stage it’s a little late”, said 33-year-old Curr, who is originally from Cornwall.

“We need to get them playing the game when they’re eight or nine years old—if not even younger—and that’s what we’re trying to achieve”. 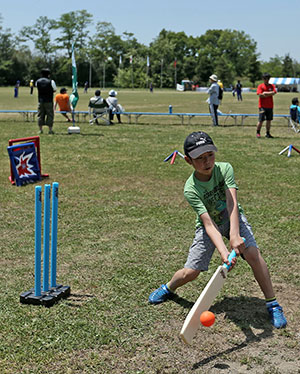 Children learn the basics of cricket.

Designed for children under the age of 13, Cricket Blast teaches them the basics of holding the bat, bowling at stumps, as well as catching and fielding—all in a fun environment.

The aim is then to have players move onto a pathway with the Japan Cricket Association (JCA) that is designed to develop teenage players into professional athletes.

Curr said so far he has had no problems in convincing the children that the game of cricket is fun to play.

“As soon as they get to play it, they just love it”, he said. “If you come to one of our sessions, you’ll see just how much enjoyment and excitement they get out of playing, and we’re hoping for that to catch on with a wider audience.

“I genuinely believe that the potential for cricket in Japan is massive”, he added. “Not everyone wants to play the sports that are popular here, and the passion that I have already seen for the game here tells me that this country can fall in love with cricket”.

Development of the game among children here is being conducted on three levels, Curr said, starting with clinics in schools, during which kids see the basics of the game and are encouraged to start wielding a bat and throwing a ball.

The School Cup will be staged in Sano and Tokyo twice a year, giving schools an opportunity to enter teams in a limited-over, six-a-side tournament. The third element is Cricket Blast, which is designed to get parents and children involved in different elements of the game.

A keen player and follower of cricket, Curr was in the travel industry in the UK before coming to Japan. In 2009, he was the driving force behind a charity cricket match that was played at Mount Everest base camp, at an altitude of 5,165 metres above sea level, that holds the Guinness World Record for the highest match ever played.

He was leading an adventure travel group in Iraq when he learned that he had landed the job in Sano City, Tochigi Prefecture, which is regarded as the spiritual home of the sport here. It was also the venue for the 2014 Pepsi ICC East Asia Pacific Women’s Trophy.

The five-nation tournament brought together Japan, Papua New Guinea, Samoa, Vanuatu and the Cook Islands in a qualifying tournament for the ICC Women’s Cricket World Cup, in which Japan’s women lost the nail-biting final to Papua New Guinea by a mere 11 runs.

Dhugal Bedingfield, the national coach and community cricket manager for the JCA, was disappointed at the result, but said Japan can take many positives out of the tournament.

“They are a fantastic team to coach because they have such incredible discipline, energy and they get on well as a group”, Bedingfield said. “There’s a good work ethic in there, and the senior players, in particular, are driven to see the team succeed”. 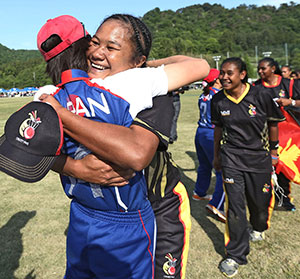 The Japan women’s team has benefitted from a number of the players spending a season training with professional teams in Australia. Bedingfield believes continued exposure at that level of the game will bear fruit sooner rather than later in the rest of the team.

Curr agrees there are some hurdles that need to be overcome for cricket to thrive here, not least of which is convincing local authorities to let games go ahead on community sports fields.

“We are trying to get across the message that this is a good summer sport for kids, that it will get them away from their computers or mobile phones and teach them key skills, such as teamwork and leadership, as well as motor skills, hand-eye coordination, and improve reaction speeds”, he added.

“Give it time and I’m confident the game can take off here”.

The scarlet-and-gold stripes of members of the Marylebone Cricket Club (MCC) in London were much in evidence across the Kanto region in November, when a team from the spiritual home of the game played a series of eight matches against local opposition, helping to raise its profile in Japan.

The 13-strong team was managed by John Emburey, the legendary spin bowler who captained England, representing his country in 64 test matches.

Speaking at a reception at the British Embassy Tokyo, Emburey said it was a “great honour to have been invited to come and play in Japan and to help develop the game here.

“We have been playing in a number of schools today, and the players and myself have all had a great time”, he said. “We are all looking forward to the matches in Japan and we see this as a very positive way to develop the spirit of cricket here and around the world”.

Speaking to BCCJ ACUMEN, Emburey said Japanese players have very good technical skills, adding that “it would be really good for the Japan team to play in the Cricket World Cup because it would help the game enormously here”.

The gathering was also addressed by Makoto Yamada, a professor at Kobe City University of Foreign Studies, who is credited with reviving the game in Japan by starting a university team and helping to set up the Japan Cricket Association (JCA) in 1984.

“The MCC has had a great impact on the development of the game in Japan”, he said. “Your first tour here in 1998 inspired our association and took the game to a whole new level, also helping us to establish the association as an NPO”.

Subsequent tours have helped to raise the profile of the sport here, giving the association access to an increasing number of schools and around 2,500 children every year.

The MCC’s visit marks their fourth tour of Japan—the previous visit being in 2009—which comes one year after the national team played at the Lord’s Nursery Ground in London. It also coincided with the first year of the Cricket Blast programme, launched in Japan in conjunction with the International Cricket Council with the aim of promoting the game at the grassroots level.

The MCC squad included Daryl Mitchell, the captain of Worcestershire, and Ben Scott, who has played for Middlesex and Worcestershire.

The tour took in all four members of the JCA in the Kanto region in 20-, 40- or 50-over formats, and included three matches against the Japan national team.

“Cricket is still a relatively small sport in Japan, so any publicity that we can generate from a club that dates back to 1787 and is based at Lord’s Cricket Ground is good”, Alex Miyaji, chief executive of the JCA, told BCCJ ACUMEN.

“Having a team of this magnitude coming to Japan makes it easier for us to go to local authorities and schools to explain what we are trying to do and to get them on-side”, he said.

“It is all about raising awareness of the game here, but it’s also about meeting new people with a love of the game and doing it all in a fun and friendly way”, added Miyaji, who is half-Scottish and half-Japanese and who was recognised by the Scottish Parliament in 2013 for his efforts to promote the game here.

“We have been quite ambitious with this tour and have been able to get all four of our regional associations in Kanto to host matches, as well as to get into a lot of schools”, he said.

“It’s very possible that we will see an immediate, positive impact on the game here because of this tour, but, thinking more in the long-term, this will be a very important experience and learning opportunity for all the Japanese players”.