I first came under the spell of the Star Wars universe in 1977, at the age of 12, when the original film A New Hope was released. Forty years later and I’m still taken in by it, so I was fortunate to be given the opportunity to get behind the scenes at media events in Tokyo promoting the latest instalment, The Last Jedi, including an interview with the actor Adam Driver, who plays the character Kylo Ren.

At one of the press conferences, Star Wars producer Kathleen Kennedy noted how Japan has had an influence on the series right from the start, with George Lucas being an admirer of Akira Kurosawa’s films. Samurai sword fights inspired the light-sabre sequences, while the armour inspired costumes, including the iconic Darth Vader helmet.

The good guys
The Hollywood juggernaut has also had very close ties with Britain, with many UK actors having played major roles in the series and various London film studios having been used for almost every instalment of the US epic space opera. Principal shoots have taken place in Elstree Studios in 1977, and for the latest chapter 125 sets were built on 14 sound stages at Pinewood Studios.

In keeping with Hollywood tradition, the British accent has often been used to portray the villains in Star Wars, but many Brits play the goodies too, including most notably Sir Alec Guinness CBE as the original Obi-Wan Kenobi, and Ewan McGregor OBE as the young version of the character. Meanwhile, Anthony Daniels has appeared in every Star Wars episode as the voice and actor inside the metallic costume of the robot C-3PO. And the list of other Brits in Star Wars goes on and on. 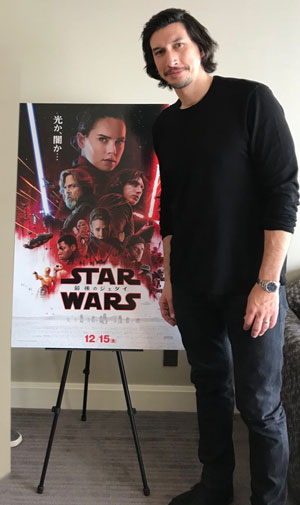 Adam Driver, who played Kylo Ren in The Last Jedi

The Disney machine
Interviewing Adam Driver provided an interesting look into the well-oiled Disney machine which, in 2012, bought Lucas Film, the home of Star Wars, from George Lucas for $4bn. Prior to meeting Driver, I was told I would be allocated precisely five minutes with him, and had to submit my questions two days ahead of time.

My questions were approved and the interview started exactly on time. A Disney PR staff member stood behind Driver with signs counting down the minutes left in our conversation. I managed to squeeze in as many questions as possible and Driver was co-operatively concise with his answers. Obviously he knows the drill too!

He’s stepping into fairly large shoes coming into the Star Wars family from the previous instalment, The Force Awakens, as the new lead villain, the grandson of Darth Vader. I asked Driver whether he wanted to create a whole new character or take some cues from Vader.

“It was a bit of both”, he replied. “I was helped by the script, they made that part of who he was. He starts from a place of feeling less-than and needs to live up to this idea that no one can live up to, which thankfully is a fun thing to play. Any anxieties I had about that, though, would eventually—hopefully—work its way into the movie”.

Coming back to the role for the second time was appealing to Driver as he could dig deeper into the character and his performance, saying, “I’ve had this experience before in a TV show where you get to do it again. I always liked that because I was initially trained in the theatre, where you live with the thing night after night for seven shows a week for a couple of months and you’re constantly going back to the well—that part of it I really enjoy”. 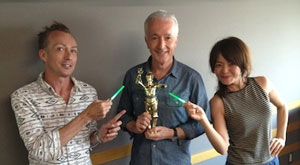 Human bond
Despite the colossal production and planning of Star Wars, it seems there is always room to shape things as they shoot. In 2012, Anthony Daniels recalled his Star Wars experiences on my radio programme. Coming from a mime background, he was the ideal choice to play C-3PO.

The original plan was for him to just be the movement actor inside the metal robotic costume, with a voice actor to be recruited later to overdub the dialogue. Apparently George Lucas imagined C-3PO as a fast talking used-car-salesman type of individual. But once shooting started, everybody on set liked Daniels’ clipped British accent, sounding a bit like a butler or valet, so he became the voice of the now iconic character.

Daniels also recalled how, at the audition stage, he had no real interest in playing a robot in an unknown sci-fi film, but seeing the original artwork of the character changed his mind. When he looked into the robot’s face, he said the eyes looked back at him and he immediately felt an emotional and human bond with the character.

While C-3PO and other favourite Star Wars characters continue with the new instalments, some are killed off, and some actors, including the much-loved Carrie Fisher, have sadly died in real life, leaving a big hole in the heart of the series.

But with Disney running the show, Star Wars will no doubt continue to cast a spell over more 12-year-olds, just as it did with me in 1977. And I hope us big kids will continue to be under it for a long time to come in a galaxy far, far away.