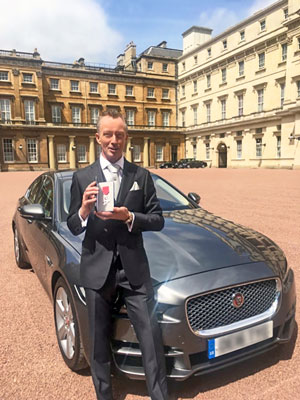 Waking up on the morning of 16 June was a feeling like no other—anticipation, excitement and nervousness enveloped in thoughts of, “Is this really happening, or is it a dream?” It was the day of my investiture at Buckingham Palace to receive an MBE for services to British music in Japan.

The pink invitation said entry at the palace from 10am for an 11am start. My mother and my partner were my invited guests for the ceremony. Up early, we all dressed—me in a brand-spanking-new three-piece suit—and ran between rooms to help each other. A final check, a group hug and ready to go.

Seven months after receiving the news of the honour via a telephone call from then-British Ambassador to Japan Tim Hitchens CMG LVO, this really was happening. I made a pact with myself to just enjoy the day and be in the moment. In fact Hitchens gave me the best advice: “Be authentic”.

Jaguar had very generously loaned me a car for the occasion and we drove through the London traffic and down the Mall. The Royal Standard was flying over Buckingham Palace. The queen is in! But would she be hosting the investiture? No one is ever told until the start of proceedings on the day.

We arrived at the assigned gate and, guided by the police, drove at walking pace through the crowds of tourists—waiting for the Changing of the Guard—who clicked their cameras and peered through the car windows to see if it was a member of the royal family arriving.

I’m sorry to have disappointed them, but my mum has sometimes been told she looks a bit like the queen, so we giggled that maybe we had just made someone’s day! I have to admit driving a smart car through the gates of Buckingham Palace with hundreds of people taking photos of you is quite a feeling.

Other honour recipients and their guests were also arriving as we entered the palace foyer. Everyone sparkling, but some perhaps not feeling comfortable. “Be authentic”, I reminded myself.

My first impression continued throughout the morning—big ornate rooms with thick red carpets and huge paintings in gold frames, the luxurious aromas of polished furniture and perfumed guests. Life Guards of the Household Cavalry in uniforms of red and gold splendour lined the stairs not moving a muscle.

At 10:45am, we were briefed and told today’s investiture would be hosted by HRH The Prince of Wales. We were told to walk up to the prince, for gentlemen to bow and ladies to curtsy, and that there will be a short private conversation with him as he attaches our medal. We were to address the prince as Your Royal Highness once, and thereafter as Sir. When he shakes your hand it is the signal that your time is up, take three steps back, bow or curtsy once again, and head off to the right.

Everyone in the room murmured, “Will I remember all that?” A few ladies rehearsed their moves—one lady’s hat fell off.

Over the years I have witnessed many shows backstage, and this was very similar. We had the performers, the script, the costumes, choreographed moves, spectacular sets, an audience and pre-show nerves. We even had the music, with a small orchestra on the balcony at the back of the ballroom playing classical and popular tunes softly throughout the ceremony. I heard the Skyfall theme at one point. A James Bond moment in Buckingham Palace—now that was quite cool!

On the dot of 11am, the music stopped, everyone in the ballroom stood and Prince Charles entered escorted by two Gurkha Officers. He took his place on the dais with five Yeoman of the Guard officers and the orchestra played God Save the Queen.

This was followed by one minute’s silence to honour the victims of the Grenfell Tower fire, which had occurred three days prior. We all waited quietly as we watched others receiving their honours and wondered what Prince Charles might ask us.

Then it was my turn. This is the moment. My heart pounded. I rehearsed it all one more time in my head. I was escorted to a spot in the wings at the front of the ballroom and there was the Prince of Wales just a few steps away. My few steps away.

Walk of fame
My name was called, I walked, faced the prince, bowed and stepped up to him. He smiled and immediately started to talk in a very soft, gentle voice, commending me on my work. He said how wonderful it must be living and broadcasting in Japan. I agreed.

I cheekily told him I had DJ’d for his son the Duke of Cambridge a couple of years ago in Tokyo. He looked a little concerned for a moment. I added that it was not cause for scandal but took place at a reception at the British Embassy. He laughed.

The prince congratulated me and shook my hand. I said thank you Sir, took my three steps back, we locked eyes for a moment, I bowed, turned right and walked away.

My head was swimming. I was “off stage” in another room where the medal was unclipped and placed inside its handsome case. The staff shook my hand and congratulated me again.

Private moment
And then suddenly all of the emotion, anticipation, nerves, thoughts of my family and the meaning of all of this caught up with me and I promptly shed tears. The staff were amazing and let me have my moment in private—they said it happens to a lot of people. I composed myself, was taken to my seat in the ballroom and saw my mum and my partner up on the left—they were beaming smiles. I could now just sit, take it all in and enjoy.

The medal ceremony lasted about another 20min. Then we all stood and Prince Charles was escorted out by the Gurkhas.

Walking down the grand staircase as we made our way back to the entrance foyer, my mum whispered a flirty compliment to one of the silently standing Household Cavalry: “I may not be allowed to tell you this but you look beautiful”. He blushed.

After gathering our goods from the cloakrooms, my mum came back with a gold Buckingham Palace bag—only the ladies restrooms have these. In fact, these bags became a secret form of identification when later in the day, while walking through Hyde Park, I spotted a well-dressed couple holding the same bag. They spotted ours, we had a laugh, introduced ourselves and shared more moments from our very special day at Buckingham Palace.

Driving back out through the gates of Buckingham Palace to meet my sisters for a celebratory lunch, we were once again faced with crowds of tourists looking and clicking cameras. There was still no member of the royal family in the car, but this time there was a proud man who had just shaken the hand of the future King of England.