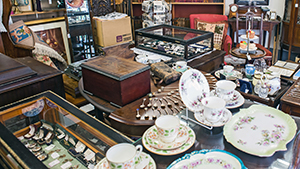 The shop’s goods are sourced from the UK.

It is perhaps no surprise to discover an elegant antiques dealership in the select Tokyo district of Denenchofu but the precise location of Alan’s Antiques may cause a raised eyebrow or two. It is on the busy thoroughfare Kanpachi-dori where traffic roars by, there are no parking spaces and—on the day of my visit, at least—there are few pedestrians.

None of this appears to deter the proprietor, Alan Edwards, a genial gentle Highlander with a cheerful disposition and an obvious love for what he does.

The shop is a real treasure trove for anyone with a taste for European antiques of all kinds. Here are teacups, decanters, a hunting horn, clocks, spoons, silverware of all kinds, golf clubs, crystal items and a striking wind-up gramophone with a horn. All the items were sourced in the UK.

“I feel like I’m the custodian of the goods”, said Edwards. “Each of the items tells its own story. We need to look after them and I don’t think they are looked after well enough. That’s really important to me”.

He opened the Denenchofu shop in the winter of 2014, but building recognition and developing a following have been slow in coming. Placing ads is of little practical use, he said; the key is word-of-mouth, and that takes time.

But he is no novice at the antiques business. In 2003, he and his wife set up a dealership in Karuizawa, Nagano Prefecture, that is now a thriving business with a large base of repeat customers. Now Edwards’s dream is for the Tokyo shop to be the first of many.

“I’d like to train people to run them, to give people a long-term future and an exciting life”, he said.

Edwards’s life has been eventful. A graduate of the University of Stirling in central Scotland, he was drawn to Japan to teach English. After some time he returned to the UK where his wife accepted a position as a translator/interpreter, while he worked for an oil firm. 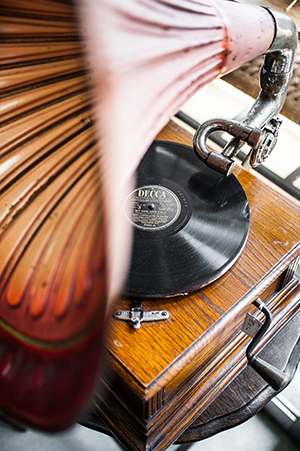 A wind-up gramophone with a horn

His first foray into dealing with antiques was over the Internet, on which, for a while, his business flourished, since he had significant contacts in Japan and the United States. This, together with online changes and modifications to the way in which he is able to ship items overseas, encouraged him to consider setting up a physical outlet.

After years of planning, the couple arrived—with their two children—in Karuizawa, where Edwards was keen to have the children explore their Japanese heritage, having already experienced their Scottish one.

“To this day I have no idea really why we ended up there; it was a question of talking with people who knew Japan and asking where they thought was appropriate”, he said. “Luckily, as it turns out, it was just the right place, though it took a while [to build the business]”.

Progress at first was very slow, and the shop was closed when the family returned to Scotland for the birth of their third child. After coming back to Japan, they opened a second, larger shop, which quickly became a success.

Then, in 2006, came the chance to buy what Edwards describes as “a dream house”. A large structure with an enormous garage, he recognised immediately that it would make a perfect showroom. It is here that the business is located today. 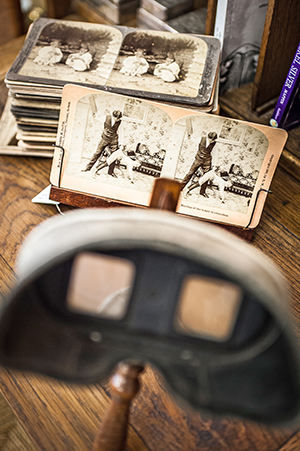 A vintage stereograph (circa 1900) and slides

Back in the Tokyo shop, Edwards is enthusiastic about what he is selling. As well as European antiques sourced in the UK, the occasional Japanese item can be found.

“I’m always interested in bringing unusual items back to Japan to see if there is any interest. A lot of them were exported during the Meiji Era”, he said. “But I’ve never sold many Japanese items; there’s much more interest in Europe and America which, in a way, I think is a bit sad.

“Really the market here is for European antiques and it’s taken me a long time to learn that. So with each container I ship I have a lot more knowledge and a lot more ability to understand what will actually sell”, he added.

Japanese buyers, according to Edwards, buy to use.

“There’s virtually no market for investment collecting in Japan”, he said. “If someone buys a chair it’s because they want to sit in it; if they buy a teacup it’s because they want to drink tea from it. This is completely different from Europe, say, where people collect to invest. There may be [investment collecting] at a different level, but not at the level I work at; you don’t need a fortune to come in and buy here”.

Edwards holds up an exquisite hand-painted coffee cup and saucer in duck egg blue: “¥3,000”, he says, “and people will actually use it and I think that’s important”.