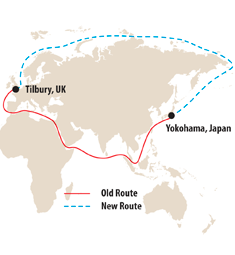 When the liquefied natural gas (LNG) tanker Ob River put in to the Kyushu port of Tobata last December, it had completed a journey that will open up vast new opportunities for transport and shipping firms that ply the waters between Europe and the Far East.

The Russian vessel took on 134,000m3 of LNG at Snøhvit in Norway before sailing north into the Arctic Sea, and traversing the usually ice-bound coast of Russia, to deliver its load to Japan.

In the past, ships have taken the route between Europe and Asia, so this trial—the first by a very large energy carrier—underlines the true potential of the passage.

Global energy firm and owner Gazprom announced, after the ship had docked, that the tanker had been accompanied by a number of icebreakers. However, warmer weather and reduced amounts of sea ice in the Barents and Kara seas meant they were not required on that leg of the journey. Meanwhile, the route to the Bering Strait was blocked only by young ice a mere 30cm thick.

According to the National Snow and Ice Data Center, based in the US state of Colorado, the Arctic ice layer on 4 September last year was the thinnest ever recorded. Global warming is cited as the main cause behind the environmental changes, and shipping firms are keen to take advantage of the situation.

“The successful journey of the Ob River allows us to count on the full-blown usage of the Northern Sea Route to deliver Russian liquefied gas both to the Asia–Pacific region and the European market”, Gazprom said in a statement.

While the route is likely to only be open for a maximum of four months per year—and potentially a far shorter period, should the region experience a severe winter—the advantages are clear.

Currently, a ship takes one month to complete the approximately 13,000nm journey from a port in Japan to a UK destination. By sailing through north Russian waters, the duration of the voyage is cut in half.

For ship operators, this translates into greatly reduced fuel costs—as much as 40% less, by some industry estimates. Yet another advantage is that ships can avoid the pirate-infested waters of the Arabian Sea, thus reducing insurance costs and eliminating the need for security teams on board.

Russia is one of the prime drivers behind ship operators adopting the new route, with Norway looking to develop new markets in the Far East for its LNG exports.

The UK’s geographical position in Europe also means that UK ports, shipping firms, as well as exporters and importers would benefit from the shorter Arctic route.

“In addition to the environmental impacts, the decline of Arctic sea ice could open up new trade routes, fishing grounds and hydrocarbon extraction opportunities”, the Foreign & Commonwealth Office said in a statement.

However, there is a caveat.

“The UK is concerned about environmental protection and sustainable development. They will seek to promote and support our business interests in these areas in line with our legal obligations as parties to international agreements relevant to the Arctic”, it added.

“The UK is also very actively involved in the International Maritime Organization’s work on developing a mandatory polar shipping code”.

“If this develops into a reliable trade route between, for example, Japan and Britain, it would have a significant impact, given it is much shorter than the traditional southern route”, Martin Giles, managing director of Phoenix Transport (Japan) Ltd., told BCCJ ACUMEN.

“One of the many ways that Phoenix Transport offers quality worldwide moving services is through the use of ‘direct booking’ for transit lanes”, Giles said. “It costs a little more, but we consistently ensure direct port-to-port sailings of every container of our customers’ household goods.

“We have a Key Performance Indicator of transit time for customer shipments”, he added. “A quicker transit not only improves the quality of our services through a shorter wait time for [the arrival of] shipments, but it is also an effective form of risk-management.

As there is a shorter distance travelled, the goods are in the container for less time, thus mitigating the risk of damage”.