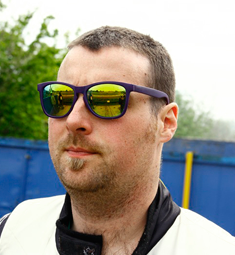 James Wolstenholme is offering sponsors the chance to join him on a test drive around Japan’s racing circuits.

The driver turns his steering wheel sharply as a woman squeals with delight from the passenger seat. But her screams are barely audible—drowned out by the roar of the car’s engine as the vehicle bounces from side to side on the dirt road.

Hills and trees fly past as the car gains speed yet, just when it appears the journey is headed for a horrible end, the driver pulls back. The car returns to the road and makes it safely to the finish line, where he drops off his passenger to her great relief.

Captured on YouTube, this scene is all in a day’s work for James Wolstenholme, professional racing driver, mechanic, exporter and speed junkie.

Wolstenholme—born in Manchester, north-west England, and raised in Kent in the south-east—is offering sponsors the thrill of joining him on a spin such as on the YouTube video, shot with a friend, around one of Japan’s many racing circuits.

“I like to offer my sponsors a real hands-on experience where they can sit in my car’s passenger seat and have the wits scared out of them by my driving”, said Wolstenholme.

“Depending on where the sponsors live, I have access—albeit limited—to most circuits around [the cities of] Tokyo, Osaka and Nagoya.

“There is no specific cost for the experience”, he added. “I foot the bill, just [as a way] to give something back to my sponsors”.

Sponsorship is something that will be key to Wolstenholme’s goal of developing a long-term racing career in Japan. The average cost of competing in a race is close to ¥400,000.

“This includes the rental of a car transporter, hotels, fuel, toll roads, entry fees, tyres, brake pads and general maintenance consumables such as oil”, he said. “With up to 10 races per year, I need a minimum of ¥4mn to keep going”.

Wolstenholme, aged 33, got the racing bug as a child while on family holidays in France, where he and his father would listen to the Le Mans 24-hour race on French radio, eventually becoming regulars at the event.

He got behind the wheel of a racing car for the first time at the age of 20, taking on an ex-Renault Cup car in the British Super Coupe Cup—a championship that ran from the mid 1990s to 2003.

“The series was a hot-bed for up-and-coming talent, as well as gentlemen racers”, he said. “It was a great experience as the fresh drivers like me were battling, while the old veterans wanted to prove what experience can do”.

Since that initial event, Wolstenholme has raced in many different types of motorsport including rallies on gravel and tarmac, and has worked as a mechanic in the Super GT championship. In addition, he has competed and won a championship in drifting, a relatively new craze in Japan. Drifting is when the driver intentionally oversteers, causing loss of traction in the rear wheels, while maintaining control from entry to exit of a corner.

Wolstenholme’s link with Japan and drifting was strengthened when he worked for Universal Pictures on a project for The Fast and the Furious: Tokyo Drift (2006) movie. Then, in 2008, an Australian friend invited him to Nagoya, where he lives today with his Japanese wife and son, Georgie, aged 3.

“The highest level I’ve competed in was in 2010, when I was offered—purely by chance—a drive in a new Lamborghini Gallardo GT4 while working at the Sepang Circuit in Malaysia”, he added. “That was a thrill”.

“The most exciting cars that I have driven are mainly Porsches. My all-time favourite is the 996 GT3 RS. This is the stripped out, bare bones 911.

“Aside from Porsche, I am a big fan of Ferrari. However, on a realistic level, the Mitsubishi Evolution range of cars is simply amazing. [Their] value-performance ratio cannot be beaten”.

Wolstenholme moved to Japan in 2008 and operates a business from his Nagoya home where he sources, purchases and exports classic cars for customers in the UK.

But his ultimate aim is to get behind the wheel of a racing car on a full-time basis in Japan.

“My long-term goal is to drive in the Japanese Super GT Championship”, he said.

“There are many ways to get into GT racing, and the main method—I’m sad to say—depends on the size of your wallet.

“My plan is to spend the next two years becoming known, and then pay a team to drive their car on a race-by-race system.

“The budget for GT racing is about ¥4mn for one race. However, as it is televised in Japan as well as abroad and has a big following, the marketing potential is there. Some drivers are supported by big brands such as Rolex and Coca-Cola”.

One thing Wolstenholme rules out is a return to Europe for a taste of Formula One.

“Not a chance! At 190cm and the wrong side of 90kg, I doubt I would even fit in an F1 car. My sights are firmly set on International GT racing.

“It’s on a completely different level”, he added.