Motorways: Shop When You Stop

In mid-August, a considerable portion of Japan’s population takes to the motorways for a short-term seasonal migration called Obon yasumi.

Little can be done to reduce the resultant traffic congestion that can extend up to 50km along major motorways. But the Nikkei Marketing Journal (28 June) reports that visitors to service areas and parking areas will find that, at long last, the quality of shopping there has improved. Shops that used to be unimaginative and tacky at best, now offer merchandise commensurate in appearance, quality and selection with that of retailers found in the nation’s hub airports and major railway stations.

Further, the diversity in the types of shops may encourage travellers to make more than one stop. Outlets operated by Izone New York (sunglasses) and Strict-G (Gundam robot warrior-related goods) can be found on the Tomei motorway’s westbound side in Shizuoka City; on the eastbound side, in Ebina, Kanagawa Prefecture, travellers will find a Seijo Ishii supermarket, Shunsui gift shop, Highway Store (operated by United Arrows Ltd.) and an Isetan department store.

“Normally I don’t go to department stores much, but the fact that there is one in a service area makes it easier to buy things there than somewhere else”, a 60-year-old man from Chiba Prefecture explained to the Nikkei.

The publication theorises that the service areas are finally understanding the psychology of domestic travellers and how to get them to spend.

The thrice-weekly trade newspaper reports that total sales revenues at the service areas and parking areas reached ¥463.3bn in 2012—exceeding by more than ¥60bn the annual nationwide sales of the Marui department store group.

The growing business reflects the diversification of tenants, which has led consumers to realise that roadside shops offer a good interlude during a journey.

In a survey compiled by Japan Tourism Marketing Co., 49.7% of respondents indicated that, while travelling, they had visited the service and parking areas they had wanted to see.

On an average day, 1.86mn vehicles use the two Tomei motorways, where a total of 164 service and parking areas are located.

In addition, several of the newer service areas—such as the Surugawan–Numazu Service Area and the Shimizu Parking Area in Shizuoka—have built parking facilities that enable nearby residents to shop without having to enter the motorway.

For firms mulling entering this type of business, the Ebina Service Area offers temporary space for test marketing. From 29 May to 11 September, Mitsukoshi Isetan Holdings contracted a 30m2 commercial space in which it has stocked about 1,000 different items. The spot was previously occupied by hosiery speciality shop Tabio Corporation.

Kunihiko Moriya, a senior researcher for Japan Tourism Marketing, believes the increase in the number of older drivers can also be expected to contribute to sales.

Are You Anti Social Media?

“Do you post personal information about yourself on the internet?”

When the Asahi Shimbun’s weekly “be-between” online survey (13 July) posed this question to 1,384 people, only 29% gave a positive reply, as opposed to 71% who said they did not.

The respondents were not requested to give their age, but it is known from other surveys that the use of social media declines as people age. With a few notable exceptions, this is true worldwide.

In response to the question, “Are you interested in personal data posted by other people?”, only 15% replied in the affirmative. 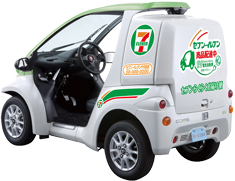 One customer, 73-year-old Genichi Torumi, finds it so convenient he’s stopped shopping at the local supermarket. “It’s convenient; I want to use [the service] every day”, he told Shukan Toyo Keizai (13 July).

Torumi was availing himself of the convenience store chain’s Sebun rakuraku otodoke-bin delivery service, which Seven-Eleven Japan commenced in July 2012. Currently offering some 2,800 products for delivery by 420 of its approximately 15,000 outlets nationwide, the chain plans to boost the number of outlets making deliveries to 1,200 within this fiscal year.

Deliveries of heavier items such as bottled water and rice may be made using an environment friendly, super-compact Coms electric vehicle produced by Toyota Auto Body Co., Ltd. (coms.toyotabody.jp/). The automaker’s headquarters subsidises up to 80% of the car’s electric charging costs.

Previously, Seven-Eleven had entrusted customer deliveries of its daily special obento (boxed meals) to the Yamato Transport Co., Ltd. It then, instead, decided to provide a direct, free delivery service for orders of ¥500 and over.

The new system has almost quadrupled orders and boosted member numbers from 270,000 to 390,000. While rival convenience store chains, such as Lawson and Family Mart, are also delivering purchases, only Seven-Eleven has local store staff make the deliveries.

More than half the customers ordering meals from the Aoi 3-chome store are aged over 60. As they tend to order other items as well, the average sale per delivery reportedly is about ¥1,500, or triple the amount spent by in-store customers buying boxed meals.

Meal deliveries are subsidised by Seven-Eleven headquarters to the tune of ¥100 or more per order, so more franchises are expected to initiate a delivery service.

Following on the heels of such word imports as sekuhara (sexual harassment) and pawahara (power harassment), we can now add another word to the lexicon: matahara (maternity harassment).

It seems that more firms are obliged to take proactive steps to ensure compliance with the terms of the revised Child Care and Family Care Leave Act.

“Males make up 90% of our staff, so we’re pretty much a ‘male company’”, a 45-year-old department head at an electronics manufacturer told Nikkan Gendai (19 July).

“But last year, a group of some 20 female employees, aiming to raise a family and establish their careers, organised a ‘committee for female advancement’. And one of the things they did was to draw up a manual on preventing maternity harassment”, he said. The source describes the manual as “resembling the script of a stage play”.

“Superiors are instructed that when informed by a female employee that she is pregnant, they are to mouth a standard response, which is ‘Yokatta ne! Omedeto!’ (That’s great! Congratulations!). All other remarks are prohibited—especially questions such as, ‘Do you intend to keep working?’

“Anything aside from congratulatory remarks will be construed as matahara”. To ensure that managers and supervisors absorb the contents of the manuals properly, they are encouraged to attend training sessions.

Even when getting a woman’s opinion might be beneficial to the firm’s bottom line—through such questions as, “As a working mother, what is your opinion?” or “What do you think of this building design from the standpoint of one who is expecting?”—are strictly forbidden, an unnamed male staff member explained. “As is anything requesting a ‘female point of view’, which would be considered discriminatory”.

“There are cases of gyaku-sabetsu (discriminatory backlash) by resentful unwed female employees, or those who don’t have children. This is because their workload increases when the others take maternity leave”, explained business journalist Rumi Sato.

“A certain automaker has established an in-house rule that women returning from maternity leave will have their previous position and title restored. This makes it difficult to fill the job during their absence”, said Sato.

“So while it’s important to deal with cases of matahara, if measures are taken to excess and there’s a breakdown in workplace relationships, then it’s a case of getting the priorities backwards”.