Among Japan’s younger generation, the once-traditional virtues of persistence and fortitude are disappearing rapidly. Of 569,000 graduates of universities and occupational training schools who were hired by firms in the spring of 2010, 199,000 have already resigned. Until not so long ago, the equation sannen-sanwari (three years on, 30% will have left) had applied, but the process of giving notice quickly appears to be speeding up.

In March, reports Nikkan Gendai (22 May), the Cabinet Office released the results of a survey showing that, currently, about one out of three new hirees leaves the firm within two years.

And in a separate survey of 250 newly hired employees, as opposed to some 44% of respondents who said they intend to stay with their firm until retirement, 29% said they expected to be around for from four to six years, 25% said two to three years, and 6% said they would probably move on “within the first year”.

“According to corporate personnel staff and mentors involved in training new hirees, the most common complaint voiced by newcomers has shifted from ‘I can’t get along with my boss or superiors’ to ‘I’m not suited for this kind of work’”, says Kazutoshi Uchida, a human resources consultant.

“If they aren’t a good fit for the work assigned them, they have the option of putting in for a transfer to a different department”, Uchida continues. “After all, management is nurtured at companies by letting staff seek their own way. But today’s young people are overly fixated on being a good match for their job, and doing the kind of work they want to do. They bring this mindset with them when they join a company. If the gap between reality and their expectations is too great, they make a snap decision that the job is not for them”.

The research arm of the Mitsubishi UFJ financial group noted that, in its “Survey of New Employee Awareness” for 2012, the 34% who responded that they were working at boosting their own abilities was up by five percentage points from the previous year—an indicator of preparations to seek new employment. But this determination to keep searching for the best suited job, the writer suggests, may just lead them into another maze. 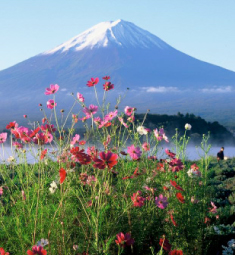 Following a sharp drop in foreign visitors after the 3/11 earthquake and tsunami, tourism to Japan is making a comeback. The 781,000 arrivals in April, reports the Sankei Shimbun (25 May), marked a 2.6-fold year-on-year increase, 10–20% of which comprised arrivals from mainland China.

Part of the recovery is attributed to relaxed entry visa requirements for individual travellers. The article also reports that foreign patronage at nationwide department stores in April showed a 4.6-fold year-on-year increase, thereby realising a slight (4.1%) gain over the 2010 figures. That month, the Fuji-Hakone one-day tour offered by the JTB travel agency attracted some 3,000 foreign tourists, while bookings for bus tours in Hokkaido this summer are said to be steadily materialising.

In addition to ordinary sightseeing and shopping, the recovery has boosted optimism that more Chinese will combine sightseeing and shopping with a complete physical check-up. Masayasu Amano, president of the Chuo Ward-based medical service Prevent, tells the Sankei Shimbun that his organisation has brought aboard 15 new medical services to conduct high-tech ningen dokku (comprehensive medical check-ups) for foreign visitors.

Despite the yen attaining historical highs, prices for imports have been rising, in some product sectors by as much as 15% year on year. Writing in Shukan Economist (29 May), senior researcher Naoko Ogata, of the Japan Research Institute, Limited, reports that while some 80% of respondents to an October 2011 consumer survey expected to benefit from the increased value of the yen, a survey this spring shows that 60% of respondents thought otherwise and, when they did benefit, the bargains were confined to a small number of categories, such as certain food products, DVDs and furniture. This, Ogata concludes, is evidence that efforts at en-daka kangen (passing on foreign exchange benefits to consumers) appear to be reaching their limits.

One thing that has changed, however, is overseas manufacturing costs; they are higher. In the case of China and other newly developing economies, prices have risen more than 5% due to wage increases and local inflation. Local domestic demand has pushed up the mid- to long-term prices of basic materials. Ogata points out that Japan is the only advanced economy in which prices have been in decline; in Europe and North America, prices have been increasing at a 2–3% annual clip.

With the recovery of world economic growth, there is likely to be a resumption in the rise of commodity prices (temporarily halted by the market crashes of 2008). Should that occur, Japan may suffer the double blow of a decline in the yen’s value and a rise in the cost of imports. To avoid such a situation, it will be necessary for Japan to secure stable supplies of resources while promoting conservation and bolstering domestic primary industries, Ogata said. 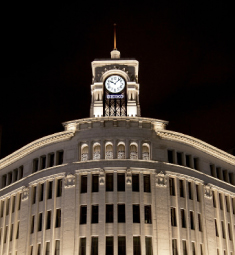 Events are planned for the 80th anniversary of the Wako Building

In April, Seiko Holdings conducted a nationwide survey of 1,240 people employed by firms (620 from each gender), of whom 65.8% said they looked forward to enjoying the London Olympics. People in the 50–59 age bracket were particularly enthusiastic with a 76.5% response. The top five popular events, in descending order, were given as swimming, football, track and field, gymnastics and judo, with 63.7% of the respondents saying that the overwhelming motive for watching is “to see Japanese garner medals”.

It should also be noted that 42.1% of males and 34.4% of females responded correctly that the time difference between London and Tokyo is about eight hours.

On another note, only 23.5% of males and 15.8% of females surveyed showed support for holding the 2020 Olympics in Tokyo, with the biggest reason for opposition being that funds earmarked for Japan’s social pensions would likely be siphoned off to build new sports infrastructure.

Incidentally, 10 June, 1932 is the date on which Seiko Holdings’ forerunner, the Hattori Watch Shop, opened at the Ginza 4-chome intersection. The firm is planning a variety of events to commemorate the 80th anniversary of the completion of the Wako Building.

Last year, 365 book retailers went out of business in Japan. That, notes Yukan Fuji (25 May), still leaves 14,696 around the country, but their future does not look good. In March, the Junkudo megastore in Tokyo’s Shinjuku district closed, reportedly due to its inability to agree on terms with its landlord.

Osaka topped the list of 47 prefectures with 56 bookshops that went under, followed by Tokyo (48 bookshops), Aichi (32), Hyogo (20) and Hokkaido (18). During 2011 a total of 25 bookshops filed for bankruptcy, with total liabilities of ¥3.53bn. The failure rate has been fairly consistent over the past three years.

“People can easily obtain information from the internet”, said a data-research firm source, who added that stores’ revenues have also been negatively impacted by businesses that rely on secondary distribution, such as large used book chains and manga coffee shops. “There’s a strong trend for individual owners of small shops to get out while the going is good. There’s nothing to stop the decline”.