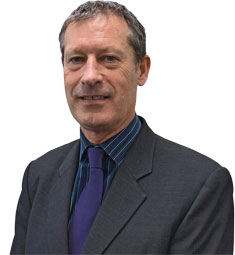 Symonds is also the head of North East Asia operations.

What are the scope and goals of your operation here?
AgustaWestland, a Finmeccanica company, is an international helicopter manufacturer providing total capability solutions.

We established our Japanese operation in March 2008 to create closer working relationships with customers and suppliers and gain greater access to the Japanese military, government and commercial markets.

Our goals are: establishing an infrastructure inside Japan that provides first-class support for our helicopters, expanding our business footprint to deliver greater value, and reinforcing our position as a key member of the Japanese aerospace community.

What have been your greatest achievements since coming here?
AgustaWestland has been selling commercial helicopters in Japan for many years, but the financial crash in the late 1990s saw the disposal of many high-value assets, including helicopters.

The sale of the first civil EH101 model to the Tokyo Metropolitan Police Department in 1999 and the selection of the EH101 by the Ministry of Defense (MoD) in 2003 re-established AgustaWestland in the Japanese market.

The ministry’s selection of an AgustaWestland model for the design of its MCH-101 helicopters has been our greatest achievement.

We became the first European aerospace firm to secure an agreement for its product to be built in Japan by the Japanese aerospace industry, thereby penetrating a market dominated by US equipment.

We’ve built on that success and trebled our business in the past five years.

How has your firm been involved with the MCH-101 helicopters for JMSDF?
The Japan Maritime Self-Defense Force (JMSDF) decided in the late 1990s to replace its MH-53E mine countermeasure helicopters.

In 2003, they selected the EH101 for its safety profile and ability to fulfil a very demanding mission.

The helicopter, rebranded as the MCH-101 (Mine Countermeasure Helicopter), has outstanding safety levels, centred on three Rolls-Royce Turbomeca engines.

A large, standing headroom cabin with a rear ramp accommodates Kawasaki Heavy Industries’ Airborne Mine Countermeasures (AMCM) mission system. The helicopter’s long range, extensive endurance and multi-role capabilities were exactly what the customer was looking for.

Although the helicopter is an AgustaWestland design, the AMCM development will be very much Japanese.

AgustaWestland provided extensive support in aerodynamics, stress and fatigue analysis, and modelling to ensure the apparatus required to deploy and retrieve the AMCM equipment was correctly designed and manufactured.

Kawasaki Heavy Industries’ AMCM system has added another dimension to this multi-functional helicopter.

How were you involved in the signing of two important defence pacts in July?
As a member of the European Business Council and the UK Defence Committee, AgustaWestland actively supported the initiative that became the Defence Equipment Cooperation Framework and the Information Security Agreement.

We nominated several collaborative concepts for the benefit of both nations and their respective industries, and are pursuing these concepts as part of our strategy for business development in Japan.

I believe AgustaWestland and our colleagues from the UK aerospace industry have supported the political process in establishing these agreements by working with our counterparts in Japanese industries and political bureaus.
Tell us about the firm’s partnership with Kawasaki Heavy Industries, Ltd.

Kawasaki Heavy Industries assembles the MCH-101 at its factory in Gifu Prefecture.

In addition, the firm installs a significant amount of specific Japanese equipment to enable the helicopter to perform dedicated MSDF roles and interact with the other armed forces inside the MoD.

Both of our firms are well positioned to take advantage of the relaxation of defence export controls, and we’ve had discussions on opportunities for both the Japanese and wider international markets.

This partnership has developed across all aspects of the business between our companies, and the takeaways reach beyond Japan, extending throughout AgustaWestland and creating benefits for other customers’ programmes.

How does the defence industry today compare with that of a decade ago?
The past decade has seen a continual decline in national defence budgets, resulting in fewer opportunities for contractors.

Thus, each project is more competitive, and not solely because there are fewer of them. Purchasers are increasingly seeking programmes that offer long life, sustained capability and achievable through life costs.

What security developments do you foresee or hope for in the future?
Traditional land, sea and air defence will continue, but with increasingly sophisticated equipment, special relationships with the US and the support of international security operations.

Helicopters are a prime example of sophisticated, multi-role equipment with capabilities in defence, transportation and natural disaster relief.

One new area of activity in the defence industry is the threat of cyber-attacks on command and control systems. Autonomous helicopter forces offer rapid responses to such threats.

However, as equipment becomes more sophisticated, so must the operators, and specialist training is an increasingly large part of the AgustaWestland product portfolio.