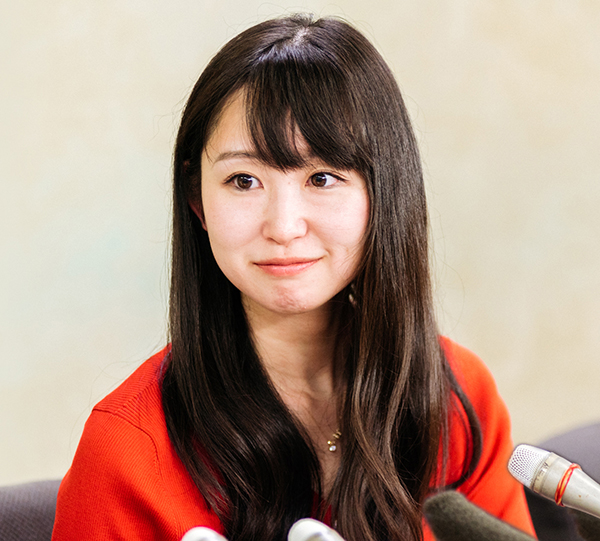 It’s been more than a year since Yumi Ishikawa, 33, sparked the #KuToo social media campaign against gender discrimination in Japan. She did so with a tweet complaining about being forced to wear high heels at her part-time funeral parlour job. That tweet generated an overwhelming and sympathetic response from many women, as well as relentless online harassment, often from men, that continues to this day.

Since then, Ishikawa has published a book about her experiences, helped launch a line of flat shoes and was named to the BBC 100 Women 2019 list as one of the most inspiring and influential women in the world—one of only two Japanese, the other being sumo wrestler Hiyori Kon, who was interviewed in the May/June issue of ACUMEN.

“It’s been half miserable and half wonderful,” said Ishikawa, a former pinup model and actress, about her life since she unwittingly started the move­ment in January 2019. Echoing the #MeToo campaign against sexual harassment, she used #KuToo in her tweets—a play on the Japanese words for shoes (kutsu) and pain (kutsuu).

Ishikawa said her goals are much larger than getting firms to give women more flexibility in workplace footwear. The focus on high heels is symbolic of the sexism that women face on many levels in Japan and the assumptions about their roles in society. She cited professional expectations that women wear makeup and contact lenses instead of glasses in public, and the belief that women will quit their jobs once they bear children, as well as do most of the housework.

“Women need to realise they do have choices,” she said. “We need to create a society where women can take control of their future”.

But the torrent of criticism she’s faced has made her realise that “many Japanese don’t think there’s any discrimination here. They can’t see that reality”.

Ishikawa has been called a fraud and a fabricator who launched the campaign because she couldn’t get enough attention as a swimsuit model who sometimes posed nude. Her book, the title of which has been rendered #KuToo: Serious Feminism Starting from the Shoes in English, was published in November. It has been savaged in dozens of one-star reviews on Amazon Japan’s website, with one reviewer calling it a “terrible” book “with thin content” that has been mostly made up.

“I was struck by how much harassment you have to endure if you’re going to speak out about discrimination against women, and how that’s a huge problem in Japan,” she said. “We need to stop those voices who are trying to shout us down and create a society where people in the future won’t have to suffer as much as I am”.

The persistent Twitter bashing has triggered some panic attacks for Ishikawa recently, for which she has sought medical help.

She is heartened by some modest progress. The Ministry of Health, Labour and Welfare added a line to a pamphlet given to employers saying that forcing women to wear high heels and contacts instead of glasses could be considered power harass­ment—although there’s no way to enforce this. Such practices may not be spelled out explicitly at many firms, but they are often assumed.

Ishikawa called it “a good first step,” but longer-term she wants the govern­ment to pass a law banning firms from requiring women to wear high heels or heeled court shoes. In June 2019, she submitted a peti­tion to that end that has garnered more than 32,000 online signatures.

Japan Airlines Co., Ltd., SoftBank Group Corp. and NTT DoCoMo Inc. have relaxed dress codes requiring female employees to wear high heels. She’s also heard from many women who say that, because of her campaign, they are no longer expected to wear heeled court shoes to work.

Last year, Ishikawa was contacted by a shoe manufacturer about lending her input and the #KuToo moniker to a new line of flat shoes for women. The resulting KuToo Follower line of footwear is essentially a collection of smaller versions of typical men’s leather dress shoes, which have not been sold in Japan until now. They aren’t very popular, she said, because they aren’t sold in many shoe shops yet, although they are available online.

Ishikawa said she’s gotten positive feedback, too, and is glad that her activism has drawn more attention to sexism in a society where it is ingrained and largely ignored.

“A lot of people told me they never realised this was discrimination against women,” she said. “Others say it’s prompted them to think for the first time about their rights”. Some men have also expressed support, saying they had no idea that wearing high heels was often not optional—and that they can hurt, she said. 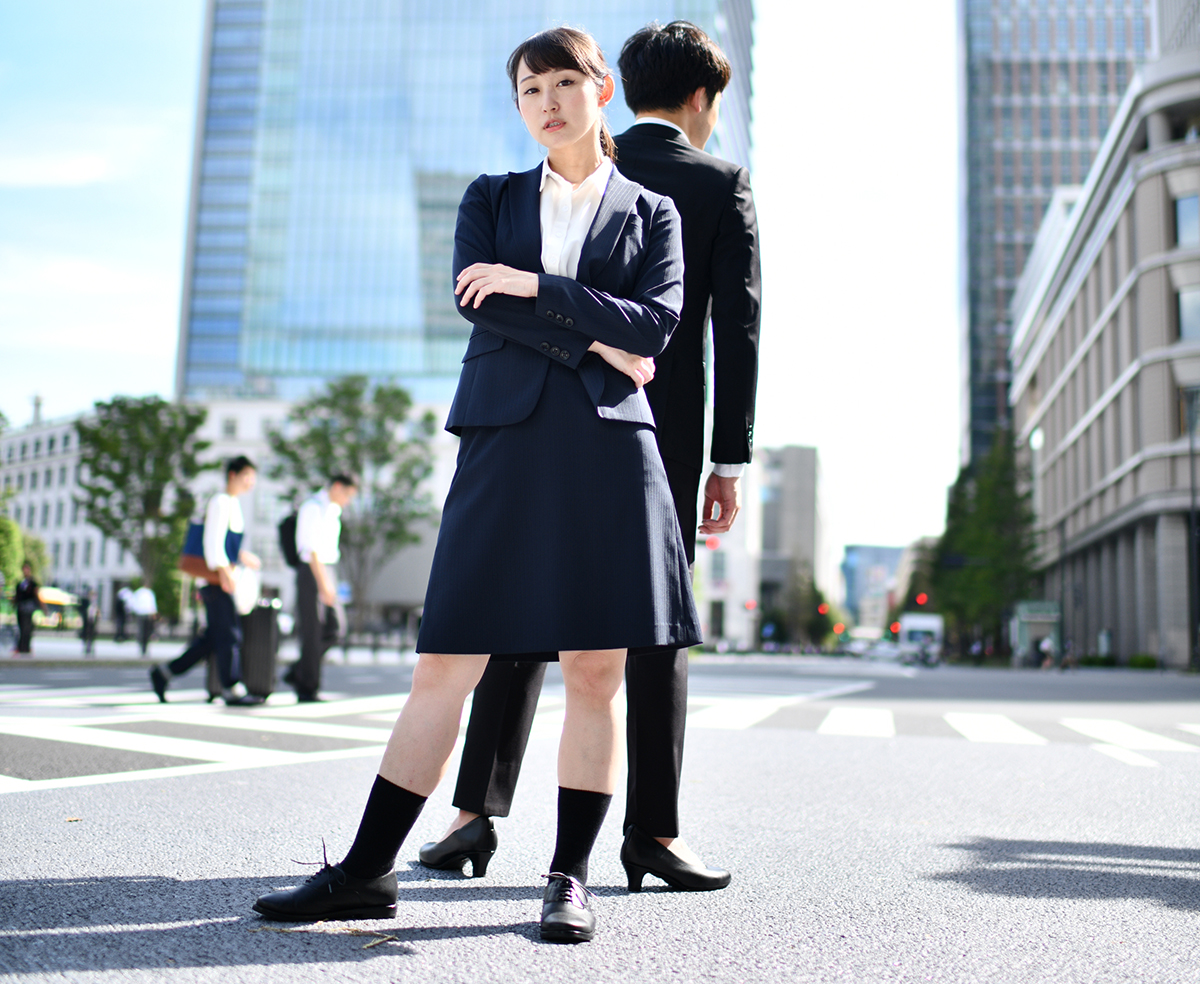 Ishikawa said she was surprised to be selected by the BBC and wondered if fairly widespread coverage of her in the foreign press was a reason why she was chosen.

Her impression is that there’s greater awareness about gender discrimination in the UK than in Japan. In 2016, Briton Nicola Thorp launched a similar petition regarding footwear—which collected more than 150,000 signatures—after she was sent home from work for refusing to wear high heels. A parliamentary investigation found discrimination in dress codes in British workplaces, but laws were not revised as they were deemed adequate.

“In Japan, it seems like government officials want us to change social attitudes before they will do any­thing,” Ishikawa said. “So, it feels like we need to keep up the activism before there are going to be any legal changes”. Also, hardly any Japanese celebrities have lent their support to the #KuToo cause, she said.

Last year, Japan’s rank in the World Economic Forum’s gender equality ranking slid to 121 out of 153 countries, down from 110 out of 149 the year before.

Took away my dignity

“I felt like a lot of those experiences took away my dignity,” she said. “Women’s views didn’t matter. They are actually part of why I became a feminist”.

The explosion of the #MeToo movement in 2017 prompted Ishikawa to realise she felt exploited, and she stopped modelling for men’s magazines. She has posed nude for a book of feminist essays, “but this was for women, to celebrate our bodies, not for men”.

The term feminist in Japan has a negative connotation, Ishikawa said, like a pushy, selfish woman “who gets hysterical easily and can’t talk logically. That image is so different from reality. Most feminists I know are smart and level-headed”.

Sexism in Japan is partly entrenched in the way men and women are socialised to speak, Ishikawa said. So, throughout her campaign, she has intentionally used more masculine language “to destroy the image of how a typical Japanese woman is meant to behave”—softer and more submissive. “I didn’t use very gentle words, and the bashing I got for that was really bad.

“Some of my friends told me that no one will listen to me if I use that kind of language, and that it would harm the general image people have of women,” she added. “But had I used gentler language, I think people might take it that I want something done for me, and I wouldn’t be viewed as an equal. I wanted to show men that you and I are equal”.