Since joining the Foreign, Commonwealth & Development Office (FCDO) in 1986 (then called the Foreign & Commonwealth Office), Carolyn Davidson has served in Guatemala, Honduras, Zambia, Japan, Germany, Slovakia, Thailand and Brussels. She was also joint British High Commissioner to Zambia, with her husband Tom Carter from 2008 until 2012, previously having led on international energy issues at the FCDO.

In August 2021, she was appointed as the British consul general to Osaka, Japan. BCCJ ACUMEN spoke with the diplomat about her career, current role and ho­pes for the future.

Please tell us about Kansai and UK business opportunities there.

Kansai is often described as the economic powerhouse of Japan. Osaka was built on trade and Kansai’s businesses played an integral part in delivering Japan’s post-war economic miracle. Today Kansai has a gross domestic product of around $800bn making it the world’s 17th largest economy—slightly smaller than Turkey and bigger than the Netherlands—with a growing population of 21 million people. That and its strong links as a trading hub with the rest of Asia mean you ignore it at your peril.

There are opportunities in the life sciences sector as Japan’s largest biomedical cluster is in Kansai, which probably is the reason AstraZeneca is based here, as are other major pharma companies.

Japanese firms here, as elsewhere in Japan, are focusing more on building a green and sustainable future, which provides other significant opportunities for engagement with the UK, a global leader in climate action. And, of course, with Expo 2025 Osaka Kansai on the horizon, there will be an increasing focus in Japan on growth and investment in this region. 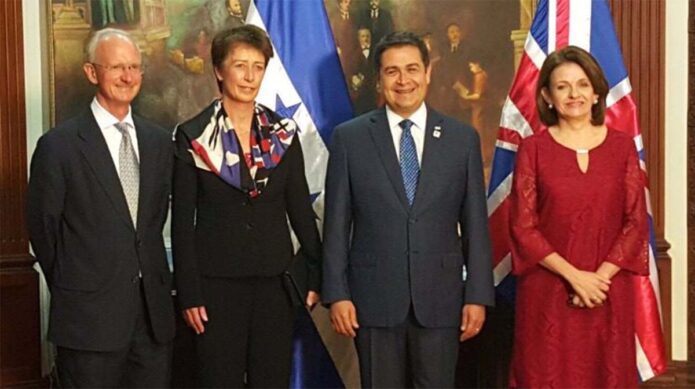 Are there any cultural or other key differences in dealing with Kansai compared with Tokyo?

All regions like to think they differ from the capital. I say this as a proud Mancunian. I think Kansai is no different. Having arrived during the state of emergency I haven’t been able to get out and about as much as I would have liked, but I am told that Kansai people are friendlier, more direct and genuinely open to new ideas. I have seen nothing to contradict that so far.

I think there is also something about the entrepreneurial spirit in Kansai. It has launched major Japanese firms that are now global names, such as Panasonic and Kyocera. And we continue to see [the trend] today, with the Osaka government’s support for the Global Innovation Summit.

Osaka’s reputation as the kitchen of Japan is becoming better known, too, as firms from here are opening restaurants in the UK, promoting the region’s vibrant food culture.

How has Covid affected operations at the British Consulate General Osaka and bilateral trade in Kansai?

Like all organisations in Japan and around the world, we have been doing lots of remote working and online engagement. I want to pay tribute to my colleagues who quickly have learnt new skills for delivering virtual webinars and events to great effect.

A recent digital healthcare event had over 400 people online for the duration of the event, underlining the undaunted interest there is in UK–Japan trade.

You no longer offer consular services at the Osaka Consulate General, so please tell us how you can help British citizens or others with an interest in the UK or bilateral ties.

All our consular services in Japan are led by the hugely effective team in Tokyo. Having said that, a lot of the services, such as passport renewal, are already being undertaken online from the UK.

Were there a crisis or emergency in western Japan, for example, the British Consulate General team would be the first line of response, drawing on support not only from Tokyo, but also from colleagues in the region.

We work closely with all teams in Tokyo, including the British Council, and see our engagement with partners in western Japan as a shared endeavour. Covid permitting, we do try to get out and about in the region that little bit more.

My advice would be to sign up for our travel advice; it’s the quickest way to learn about changes affecting residents in Japan.

You’ve had a remarkably diverse, eventful career, having served on four continents. Please tell us about the highlights and main challenges for you.

The unique selling point of a career with the diplomatic service is that, while you might work for the same organisation for many years—and I have—you are very rarely doing the same job. That sheer variety has been the highlight for me, from interpreting for Margaret Thatcher in my first job in Tokyo, to helping build partnerships with research institutes in the former East Germany and working with enthusiastic and committed colleagues in Slovakia at one of our young embassies in the early 2000s. There has never been a dull moment.

Of course, working as British Ambassador anywhere is a particular honour and privilege, and I am delighted to have been able to do that whilst blazing the trail for flexible and atypical working. When my husband, Tom Carter, and I were appointed British High Commissioner to Zambia, we were the UK—and the world’s—first job-sharing ambassadors.

We were initially met with quite a bit of scepticism from other international colleagues, but we just got on with the job, proved that it could be done successfully and now there are job-sharing ambassadors not just in the British diplomatic service, but also the French and German services, too. Role models are very powerful. 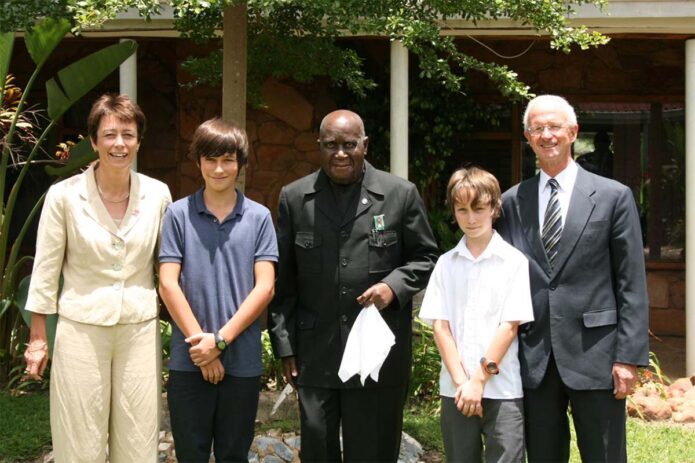 With her family at a farewell call on Zambia’s founding father Kenneth Kaunda in 2012.

With Julia Longbottom CMG, as Ambassador, we for the first time have women in the two top UK government jobs in Japan. What does that mean for you, and how might it help shape future leadership roles?

I am delighted to be here at the same time as our first female ambassador. The UK in Japan network feels very different from when Julia and I were first in Japan 30 years ago. Having said that, wider Japan does not feel that different and the proportion of women in senior positions (public and private sector) has not advanced in line with other G7 countries. As part of the UK–Japan Comprehensive Economic Partnership Agreement (CEPA) our two countries have committed to working together to improve women’s economic empowerment and I am keen to support that work.

This is an opportunity for the UK and Japan to learn from each other in the knowledge that, whilst women’s empowerment has improved in both countries, we both have some way to go. There are an increasing number of inspiring Japanese female role models and I hope that, over the next few years, there will be many more. 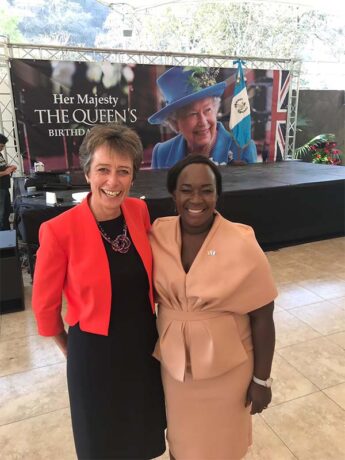 With Barbara Amono-Oceng, deputy head of mission at the British Embassy Guatemala City in 2019.

It’s early days yet, but please tell us how a typical 24 hours goes for you in Osaka.

It’s a combination of online meetings with colleagues in Tokyo and, increasingly now the state of emergency is over, in-person meetings with business contacts and regional government figures in Kansai.

With the British Embassy Tokyo our discussions range from regional government approaches to climate change, to potential investment in the life sciences sector, and ensuring diversity and inclusion across the Japan network.

Nurturing the relationship, across the whole of western Japan, with major Japanese investors in the UK is also a big part of the role. That is great, because that forces me to get out of the office to see, on the ground, what businesses are doing.

Whatever the timetable, the day must have some physical exercise in it—either a run or some yoga. Without that, I become very grumpy, which helps no one. 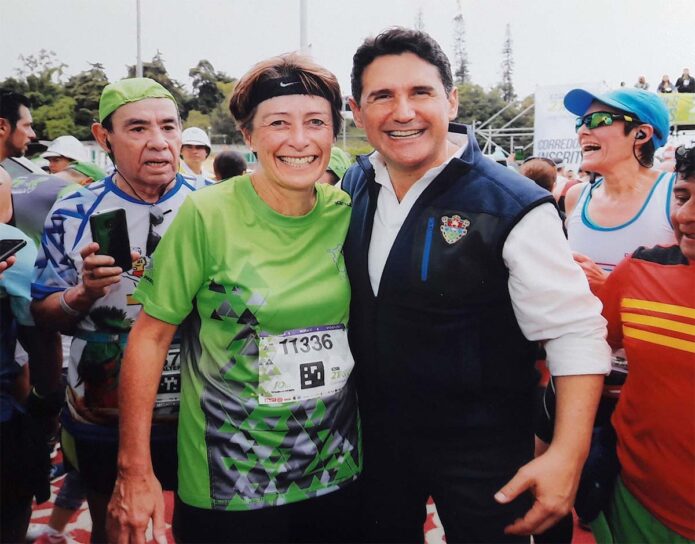 With the Mayor of Guatemala City at its 2019 half marathon.

What do you see as the main challenges facing you at Osaka and in the UK–Japan relationship?

As for everyone, emerging from the pandemic is the biggest challenge at the moment, personally and professionally. We have all had to learn new ways of doing business—and running our personal lives—and I am keen to maintain the good points of our new ways of working, whilst reconnecting in person as much as we can.

As the vaccination and booster programme progresses, it would be great to see fewer border restrictions to enable more of the in-person contact which underpins our bilateral relations.

How has Japan changed for you since your first posting here in 1988?

I now have a husband and two adult sons, so my perspectives are a bit different from when I was in Japan the first time. Japan was definitely riding high in the late ’80s and early ’90s, and I left as the bubble was bursting. I sense I might have missed the most difficult years here and have returned to a Japan aware of the scale of the challenges, as well as keen and willing to work with partners such as the UK to help address them, be it building a cleaner, greener future, healthy ageing or digitalisation.

Finally, any message for the British expatriate community in Japan?

It strikes me now is a particularly exciting time to be working on UK–Japan relations. I think Japan has had a low profile in recent years in the UK, exacerbated by the anxiety around Brexit. But the UK–Japan CEPA, our application to join the Comprehensive and Progressive Agreement for Trans-Pacific Partnership, some recent very significant announcements of further Japanese investment in the UK, and the clear message from the Integrated Review of the tilt towards the Indo–Pacific with Japan our closest security partner in Asia, puts Japan front and centre of our plans for the future.

Science and technology, health, building a clean and green future out of the pandemic are all areas where UK–Japan cooperation is well established and has potential to grow further and faster. I am delighted to be offered the opportunity to help advance all of that.

1993 Brussels, Internship at the European Commission