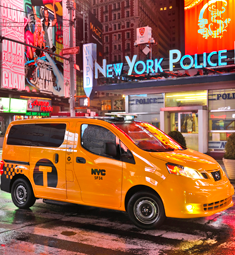 
With some of the most cutting-edge technology that one of Japan’s leading automobile manufacturers has ever devised, the new generation of London’s Hackney Carriages is to bring together the heritage and iconic design values for which the vehicle is renowned around the world.

Nissan Motor Co., Ltd., which has custom-built the NV200 to operate on the streets of London, knows that it will have to be at the top of its game to please the fussy cabbie community and the 300,000 people who use taxis every day in London.

“We’re making sure that the NV200 fulfils Transport for London’s conditions of fitness, such as the [7.6m] turning circle and convenient wheelchair access”, Andy Palmer, executive vice-president of Nissan, told BCCJ ACUMEN.

“The Nissan NV200 London Taxi will be powered by engines that deliver great performance, low CO2 emissions and exceptional comfort”, Palmer said. “We’re equally confident that it packs a host of other innovative features for added comfort, safety and external visibility that will attract customers to the cab. With competitive pricing, lower maintenance costs, and reduced fuel bills due to the model’s best-in-class fuel economy, it will keep London’s venerable taxi drivers happy, too”.

And if this is not enough, future versions of the car hold the prospect of being all electric, with the attraction of zero exhaust pipe emissions.

The shape of the London cab is a key concern for purists and Nissan anticipates that the NV200 “will become just as iconic [as the traditional London taxi] as it becomes a more familiar sight”, Palmer added.

There is a bizarre requirement by law for the cab to be able to transport one bale of hay in its front seat, which Nissan has interpreted as sufficient space for a large suitcase.

Nissan won the 2011 Taxi of Tomorrow competition to provide the next generation of New York’s similarly famous yellow cabs. The firm learnt a lot from that experience, but has undertaken extensive modifications to the standard NV200 to ensure that the vehicle meets Transport for London’s demands.

These include giving the cab a 7.6m turning circle, achieved by re-engineering the front suspension and steering and, with side-door access, being able to accommodate a passenger in a wheelchair.

The new cab gives five passengers more legroom than taxis that are currently on London’s roads, and will come equipped with a 1.2m2 glass roof that is expected to prove popular with visitors to the city.

The NV200 has also proved a hit with London Mayor Boris Johnson, who is championing his Air Quality Strategy for the UK capital.

“Improving air quality in London is one of the most important challenges I face as mayor”, Johnson said. “Having taken the significant step of introducing the first age limit for taxis in London, I am absolutely delighted that manufacturers are stepping up to the plate and are responding to the challenge I set, in my Air Quality Strategy, to reduce taxi emissions and improve efficiency”.

Cab drivers also appear to be keen on the vehicle and Nissan already has an excellent reputation with the fraternity that has passed The Knowledge—the extensive training course that all licensed London taxi drivers must pass—thanks to the reliability and efficiency of the 2.7l TD27 diesel engine that was chosen for the iconic LTI FX4 Fairway black cab.

“Nissan already has a great footing in the London taxi market. The 2.7l [engine] that featured in some of the early taxis was one of the greatest engines ever put in a cab”, said Steve McNamara, general secretary of the Licensed Taxi Drivers’ Association.

“From what I’ve seen of the NV200 London Taxi, it ticks all the right boxes”, McNamara added. “It’s important that it looks like a cab, is comfortable with good ingress and egress, and is reliable. If the fuel consumption figures are as promised, it will be a big seller”.

There was a distinct shortage of cabs on the streets of London in the latter months of last year after a fault with the gearbox forced several hundred cars to go in for emergency repairs. Sales of new cabs were also suspended.

Manganese Bronze Holdings plc, the Coventry-based firm that makes the present version of the vehicle, has been experiencing financial difficulties and had to call in professional services firm PricewaterhouseCoopers in an effort to find new sources of funding.

The NV200 London Taxi is based on Nissan’s multi-purpose NV200 compact van, which was launched in late 2009 and has since won numerous international awards. To date, more than 100,000 units have been sold in 40 countries.

The vehicle also has been selected as the next-generation cab in Barcelona. In addition, Nissan is “currently in discussions with a few other progressive cities around the world about the potential of the NV200 for their taxi fleets”, Palmer revealed.

“Nissan has ambitious plans for our London black cabs; I would say that Londoners will be hailing a Nissan NV200 taxi on the streets of London sooner than you think”, he said. “Trials of the electric version, using actual taxi drivers, are expected to begin soon, and sales are scheduled by the end of the year”.

Mercedes-Benz is not giving up the fight to have its vehicles become London’s official taxi.

As far back as August 2008, a variant of the German firm’s Vito vehicle won approval from the Public Carriage Office, the organisation that regulates and licenses taxis and private hire vehicles for use as licensed taxis, and are slowly appearing in the city. Currently, about 7% of the cabs in London are Vitos.

The 2.1l diesel engine delivers 116 horsepower to the front wheels of the Vito, which has a five-speed automatic gearbox, although it is neither as green nor as economic as the Nissan NV200.

Mercedes pointed out, however, that the vehicle only needs servicing every 38,624km, and is appealing to cab drivers by offering the vehicles for £2,000 down and £135 per week for the next three years. After that, they can opt to take on a brand new cab.

The Vito has electric sliding doors, electric steps and seating for six people, and is able to accommodate a wheelchair.

For the vehicle to have a turning circle of 7.6m, the Vito also has rear-wheel steering to enhance the radius of the turn.

Mercedes-Benz said in a statement that the vehicle puts into practice the same philosophy that has imbued its larger vehicles for many years: vans born to run.