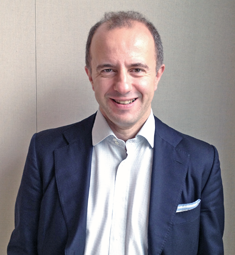 A 30-strong delegation from the European Commission held a second round of discussions on a Free Trade Agreement (FTA) with Japan over 10 days in Tokyo in late May and early June.


The first round of talks, held in Brussels in April, is considered to have been a success. There are high hopes that an agreement can be reached that is worth around €1trn in increased trade between the two blocs. A significant portion of this will come from the UK, where bilateral trade with Japan is running at around £18bn a year.

Antonio Parenti, deputy head of the European Commission’s Far East Unit, gave BCCJ ACUMEN an update on the progress of the discussions.

How would you describe progress to date in talks on an FTA?
We are still at the beginning of the discussions and it will be a long and complicated process.

So far, we are at the stage of better defining how we can achieve the goals we set out in the preparatory stage. We are preparing the ground for entry into the more substantive part of the negotiations.

I believe [the process] has been going according to plan, and we have had two positive meetings. I don’t think either side expected a breakthrough at this stage but, that notwithstanding, we have seen progress in terms of understanding each other’s position and I feel that will pay off as we go forward.

How long do you expect the discussions to continue?
It’s very difficult to say. If you look at how long it took to reach an agreement with South Korea, that was about two-and-a-half years.

I think that, given the time these types of efforts require on both sides, that [time frame] is a reasonable expectation for these discussions.

If it can be done faster, the European side is ready to move forward faster—but not at the expense of substance. This is for the negotiating process, however, and after that will come the ratification process.

Which areas are progressing most smoothly?
We have 15 working groups. None of these groups has yet got down to negotiations on the treaty texts.

We are therefore still in the process of explaining what we are looking for, why we want it—and then understanding what the Japanese side wants and why they want it.

I think at this stage we can say there will be areas that are easier to negotiate than others but, overall, the principle of negotiations is that nothing is agreed until everything is agreed. 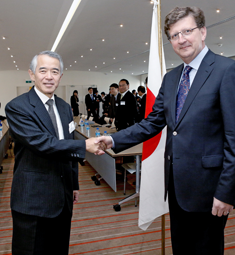 Jun Yokota, chief negotiator, and Mauro Petriccione, a director for development and management of trade relations

Which areas will be easier to negotiate?
The institutional issues will most likely be easier in areas such as dispute settlement mechanisms. All the rest will be more complicated, to varying degrees.

We are talking about two major economies that want to integrate here, after all. This agreement will only make sense if we create an economic environment in which companies of both countries can compete in each other’s markets on a fair basis.

How does the EU team prioritise trade issues it wishes to negotiate from the long list of measures to be debated?
We are not at the point of prioritising issues yet. This will only come in the later stages for both sides. This will be the crucial time in the discussions.

Negotiations are [deemed] successful if both [the EU and Japan] are able to make compromises that are mutually acceptable.

Will you be calling on EU firms to support the negotiations later? If so, how will you do this?
EU companies have already been asked to support the talks and have been contributing. We are definitely looking for their continued support.

I think it is fair to say that we need them to help create solutions. We want, and need, that for the companies operating in Japan.

We need to know their concepts for this market, the problems that they face, and if the solutions we are creating are effective in solving common problems and avoiding the creation of new problems.

The EU has the right to withdraw from negotiations after one year if Japan does not agree to remove certain non-tariff barriers. What precisely are you looking for from the Japanese?
We were granted in our mandate the possibility to stop negotiations if, at the end of one year, we were not seeing on the Japanese side the implementation of what was agreed in the preparatory negotiations.

We are looking for the implementation of what Japan committed to as liberalisation in some sectors and the facilitation of work in certain other sectors.

The “scoping exercise” is complete, but its contents are secret. Why is this, and how do European firms know if their trade issues are included in the negotiations or not?
Yes, this is a secret document. It is a joint definition of the level of ambition that we want to reach.

It does not contain solutions to specific problems because that is not the aim of the scoping exercise. Its objective is to identify the areas that will be covered in the negotiations.

It is shared with member states and the relevant committees in the European Parliament.

It was prepared with the help we received from industry and that has been very important in understanding what we should be achieving. But formally, this document is not for industry.

There are a number of discussions with stakeholders and ways to address issues and if any companies want to ask us, we can explain about the negotiations and what we are promoting.

Is the “scoping exercise” the last chance for EU firms to lodge trade issues, or are there opportunities to do so further down the road?
The scoping exercise is not a legally binding document or an agreement; it is more of a gentleman’s agreement between the two sides to negotiate in good faith and on the stated ambitions.

It is almost more of a detailed agenda of the future negotiations, but it does not solve any of the issues.

What is the size of the prize, in terms of increased trade and jobs, if the EU and Japan can agree to a free trade deal?
When we did the assessment, we saw that, if we were as ambitions as we could be—and we want to be ambitious—then this deal could bring about an increase in Europe’s GDP of between 0.6% and 0.8%. This is close to €1trn in additional trade, and that means a lot of jobs, too.

There are lots of sectors in which British industry will be able to benefit; Britain produces a number of niche cars, for example, while medical devices, chemicals, and financial services are all also very important.

And which ones have reservations?
For Europe as a whole, the area that is most sensitive is cars. The industry is undergoing a difficult period at the moment, but I think that trade can be more of an answer than a problem. If some of the problems in Europe are structural, then it will take time to rebalance from the economic crisis that we have been experiencing since 2009. That is an opportunity to export to foreign markets that are already growing again.

If UK firms have queries about the FTA, how can they go about finding out further information?
We often receive questions directly from companies and we try to answer them.

Sometimes they come to us through their national administrations and, for small and medium-size enterprises, their office of foreign trade is usually their first interface.

We are limited in our resources and these are often resource-intensive problems, but we try our best and we often learn something, too. It is never time wasted.

What is the long-term prognosis for Europe–Japan trade relations?
If I didn’t believe in a positive future, I would not be doing this job. If we can conclude the discussions in two years and then ratify the agreement, I think we will start to see the benefits fairly rapidly in terms of the liberalisation of markets: maybe in five to 10 years.