On 31 January, the UK left the European Union. This was an historic event which marks a new chapter in Britain’s domestic policies and inter­na­tional relations. What does it mean for Japan? I think it means that the UK will be even more actively engaged in this part of the world: a Global Britain that looks outward beyond its immediate neighbour­hood. Already, Japanese government and business are sensing a new confi­dence in the UK after a period when a minority govern­ment struggled to get its business through Parliament.

It seemed natural that Foreign Secretary Dominic Raab’s first overseas trip after our departure from the EU should be to the Indo-Pacific. In early February, he visited Japan, Australia, Singapore and Malaysia. 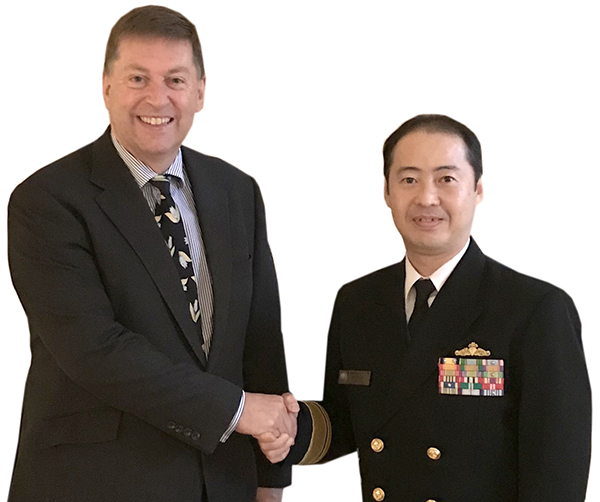 In Tokyo, he held a strategic dialogue with Japanese Foreign Minister Toshimitsu Motegi, covering a wide range of shared challenges and regional issues. At the press conference afterwards, Minister Motegi called the UK an “indispensable partner” and welcomed the big surge in our security cooperation over the past three years—particularly the number of Royal Navy vessels working with the Maritime Self-Defense Force in Japanese waters. The ministers expected this interoperability to expand further and discussed the need to get the right legal arrangements in place to facilitate that. Earlier in the month, I met Admiral Yoshiyasu Ishimaki, who was heading to Bahrain to command CTF151, the international maritime task force tackling piracy off the coast of Somalia. He will be supported by a Royal Navy Chief of Staff.

The two ministers also discussed the future UK–Japan trade agreement. A team led by the Department for International Trade had been in town earlier in the week for discussions with Japanese ministries. Both sides hope to make early progress towards an agree­ment, which will take as its starting point the existing EU–Japan Economic Partnership Agreement (EPA), with some additional ambition as time permits.

In the meantime, all the provisions of the EU–Japan EPA will continue to apply to the UK until the end of this year, giving business additional certainty. Mr Motegi also welcomed the UK’s interest in joining the Comprehensive and Progressive Agreement for Trans-Pacific Partnership at some point. Mr Raab also explained that we are expecting the separate negotiations between the UK and the EU to produce a trade agreement that maintains largely tariff-free trade between the two—something many Japanese investors in the UK are very keen to see.

The Foreign Secretary was pleased to meet representatives of a small British solar energy firm, Winch, that had just partnered with Itochu to provide renewable energy solutions for remote off-grid locations in Africa. 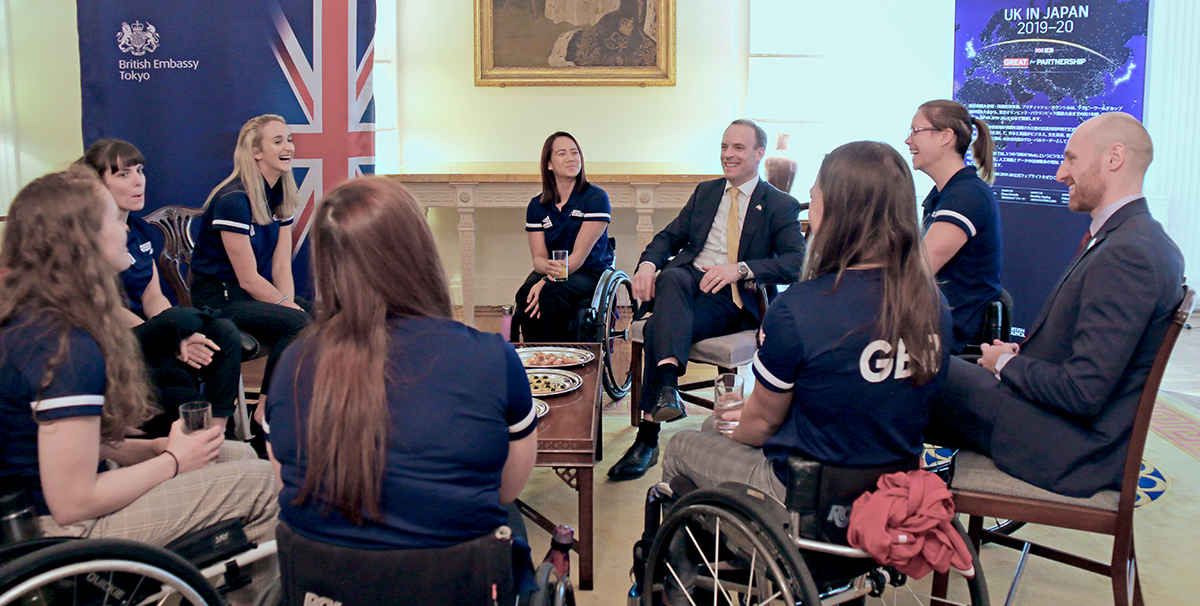 I hosted a reception to give Mr Raab a flavour of the variety of things we are doing as part of our UK in JAPAN 2019–20 campaign. Attendees included the Team GB Women’s Wheelchair Basketball team, here for a tournament in preparation for their medal bid at this summer’s Paralympics. He also met representatives of Rio Tinto and Standard Chartered Bank, who, along with Jaguar Land Rover, are the main title sponsors of the campaign, as well as a range of Japanese cultural institutions who are hosting the various performances and exhibitions I described in the January issue of ACUMEN. I also took him on an early-morning trip to a sumo beya (stable) to watch some young sumo wrestlers training. As a 3rd dan karate expert, he was fascinated. 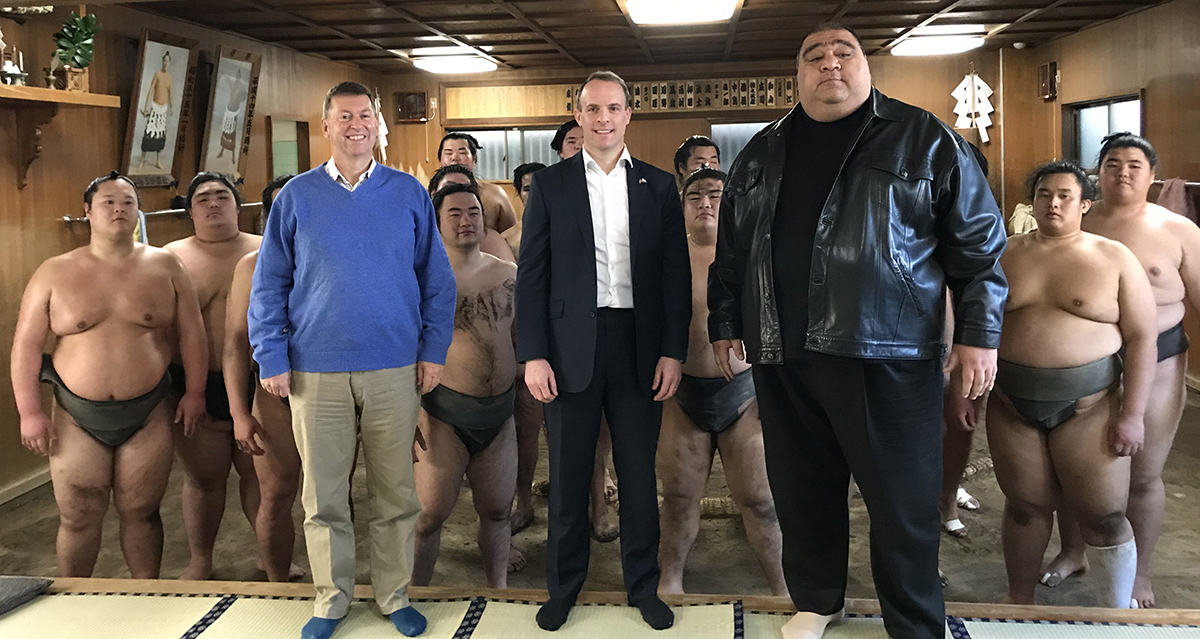 The charismatic Environment Minister Shinjiro Koizumi came round to the Residence for afternoon tea with the Foreign Secretary (below), for a good discussion about how Japan can contribute to successful outcomes at the COP 26 meeting in Glasgow in November. Mr Koizumi has been more outspoken publicly than his fellow ministers in calling for increased Japanese ambition. Ideally, this would include bigger cuts in its emissions targets and an early deadline for zero carbon, as well as a shift away from building and financing new coal plants in Japan and around the region. This will not be easy, but there are some encouraging signs of rising support for the agenda among parts of the business community, media and local governments. 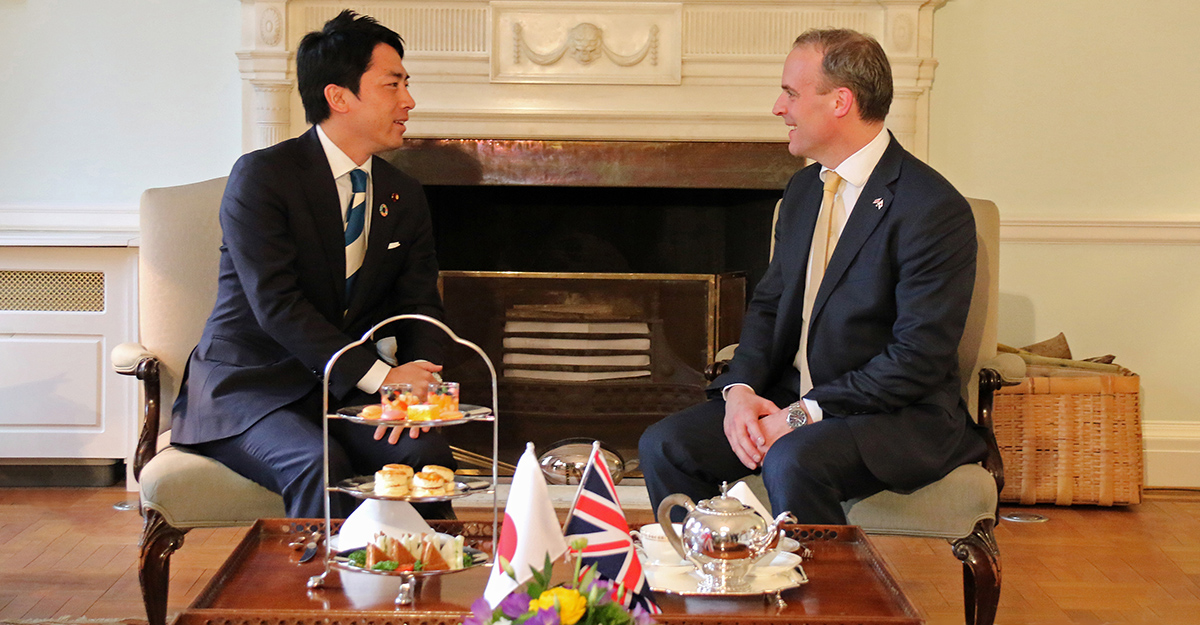 In January, I was invited to speak—alongside three Japanese ministers—at the launch of a report on Japan by the UK-based Carbon Disclosure Project (CDP). From 17 February, the Embassy will be hosting a Clean Growth GREAT Week (actually it lasts a fortnight), showcasing a range of British technological and commercial innovations as well as helping to build UK–Japan partner­ships. The UK’s special Envoy for COP 26, John Murton (who worked at this embassy some time ago), will be visiting for the event. And a very senior delegation from the Business Department in London will also be in town at the same time for their annual Industrial Policy talks with the Ministry of Economy, Trade and Industry.

Keidanren President Hiroaki Nakanishi called on me at the Residence in January. It was a pleasure to see him recovering so well from his recent illness. In February, I was invited to address the Keidanren Brexit committee to update members from a range of different business sectors with key interests in the UK on progress following our exit from the EU. They have been following this issue closely and made several study visits to London and Brussels.

In April, senior British Treasury Officials and financial regulators will be in Tokyo for their annual talks with their Japanese counterparts. This will also include a business roundtable. To prepare for that, my team and I got together with representatives of British financial firms here for a useful discussion on what issues should be on the agenda.

It was, as always, a pleasure to attend the British Market Council’s new year party. The organisation, led by Teruo Asada of Marubeni, do great work in promoting UK exports to Japan. 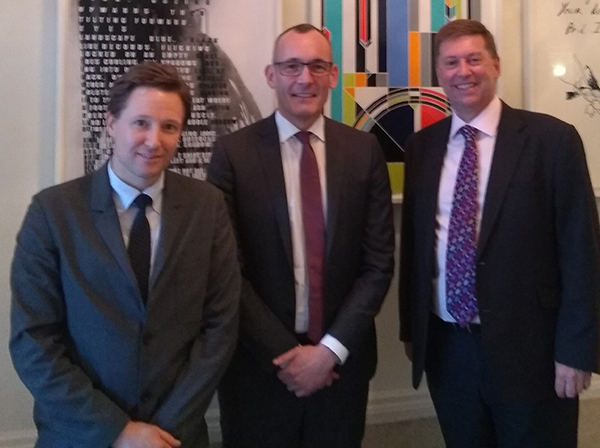 The London Philharmonia, who have been touring in Japan, brought their virtual reality experience to the Residence at a dinner I was hosting for senior Japanese executives. You don a visor and headphones, and it is as if you are sitting right within the orchestra, under the conductor’s baton, with a 360-degree view.

Matt Knowles, the excellent new head of the British Council in Japan, invited Lori Henderson and me to take part in a fascinating seminar about values at the Council’s headquarters in Iidabashi.

James Hollow, the chair of the board of trustees, and Paul Tough, the head of the British School in Tokyo, came round to brief me on the latest developments at the school. I was pleased to hear that it is going from strength to strength.

This issue is moving so fast that anything I write will be out of date before publication. But I would encourage everyone to monitor carefully the Foreign & Commonwealth Office travel advice on Gov.UK, as well as the guidance put out by the Japanese government.