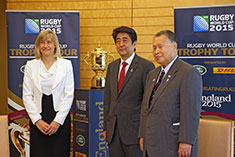 Japan’s rugby team played its final match in the old National Stadium on 25 May, comfortably defeating Hong Kong to seal their place at the Rugby World Cup (RWC) 2015.


And while the players set their sights on the Webb Ellis Cup in September 2015 and work begins on tearing down the main venue built for the 1964 Tokyo Olympic and Paralympic Games, a small army of organisers is moving ahead with plans to host two of the world’s largest sporting events here in 2019 and 2020.

After Britain in 2015, the RWC comes to Japan four years later. And the following year, Tokyo hosts the largest—and most organisationally challenging—sporting occasion, the Olympic and Paralympic Games.

Fortunately for Japan, Britain has some of the best in the business when it comes to staging global sporting extravaganzas.

“Staging the event here will be tremendous for Asian rugby as a whole”, Snowball added.

RWC 2019 will mark the first time the finals are played in Asia. An added boost is that in 2016, the Rio de Janeiro Games will be the first time that seven-a-side rugby—along with golf—will be included. Both sports are to be retained for Tokyo 2020.

“That is ideal for Japan”, said Snowball. “What better sports could they have added for Japan than rugby sevens and golf?”.

In late May, the organisers of England 2015 spent five days in Tokyo for discussions with their Japanese counterparts. The team’s work was three-fold during its time here, according to Snowball, starting with the tour of the Webb Ellis Cup.

“The torch relay for the Olympics is a hugely galvanising event for the Games and, historically, rugby has not done that; so this is the first International Trophy Tour”, Snowball said. “We are starting in Japan, because it is the next destination for the finals and the first qualifier for 2015, and then going on to 15 other markets”.

Working with partners Jaguar Land Rover Automotive PLC and DHL, the trophy will visit nations that have a long history of playing rugby and those for which the game is relatively new. The cup will land back in Britain 100 days before the 2015 World Cup opening game, on 18 September, and start an eagerly anticipated nationwide tour.

After attending the Japan–Hong Kong qualifier, Snowball said coach Eddie Jones is developing a capable squad that “could give Scotland a run for their money”.

Another key element of the visit was starting the transfer of knowledge gleaned from London 2012 and the RWC 2015 preparations to the organisers of Japan’s events.

“So far, there has been a great deal of openness and interest on the Japanese side”, he said. “The Japan Rugby Football Union are very eager to learn, and I think that all sides agree that the 2019 and 2020 combination is a very exciting opportunity”.

RWC England 2015
That optimism for the partnership was echoed by Debbie Jevans, CEO of England Rugby 2015, when she spoke at a Foreign Correspondents’ Club of Japan press conference.

“The first is to plan, plan, plan”, she said. “You cannot plan enough, and do not underestimate the power of testing your plans. For the Olympics and Paralympics, we carried out 42 test events, for every sport and for every venue, and the preparation was invaluable”.

Second, she explained, for the Olympics, the torch relay is a key opportunity.
“When it arrived in England ahead of London 2012, the public really got behind it”, Jevans said. “You need the nation and the community to be behind you. Japan has to start preparing for this now”, she added.

While Britain is doing all it can to assist Japan’s preparations for the two events, the anticipation is building back in Britain for RWC 2015.

The 13 venues have been selected—from Exeter and Brighton in the south to Newcastle and Leeds in the north—and work is under way to upgrade facilities, including broadcasting facilities to beam the games to a global audience estimated at more than 4bn people.

The four pools for the 20 qualifying teams have been drawn and the match schedule has been arranged. The budget is being managed, some of the 2.3mn match tickets are already available, and more are to be rolled out over the coming months. Try-outs are also taking place for the 6,000 volunteers—known as “the pack”—who will help out at the tournament.

“We want everyone to embrace rugby and our role is to engage our nation and the world in this event”, Jevans said.