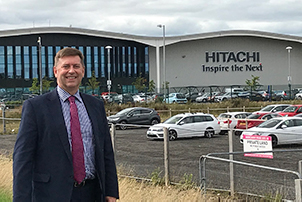 I spent several weeks in August back in the UK, travelling on Japan-related business all around the country, including Scotland, Wales and the North East of England, as well as London. I was reminded again what a truly beautiful country we have, with an extraordinary diversity for our relatively small landmass. 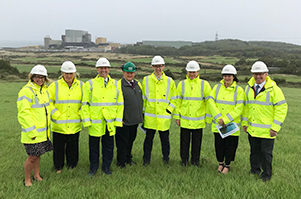 A 1,000-acre site on Anglesey may be home to a new nuclear power station

My main focus was meeting Japanese investors across a wide range of business sectors. I was particularly pleased to visit the stunning 1,000-acre site on Anglesey, North Wales, where Hitachi hopes to build a new nuclear power station, subject to striking the right financial deal with the British government. The scale of the project is immense and would involve up to 9,000 workers in the construction phase.

In the North East, I visited Hitachi’s rail plant at Newton Aycliffe, in County Durham, which is producing trains for intercity express and suburban lines. I also saw NSK’s bearings plant at nearby Peterlee, which proudly claims to be the oldest Japanese manufacturing investment in England, dating back to the 1970s. The sophistication of its products has evolved significantly over that time, but it remains a key supplier to automakers in Britain and Europe.

I had several roundtable discussions with groups of investors, facilitated by the Welsh government and by the Japanese Consulate General in Edinburgh. Inevitably there was quite a lot of discussion about Brexit. I had previously caught up with the latest thinking in calls on key government departments in London, including the Department for Exiting the European Union, the Department for International Trade and the Department for Business, Energy and International Strategy. The firms were supportive of the proposals for continuing access to the EU market set out in the British Government’s white paper. Their main concern was continuity, in order to minimise disruption to their European supply chains and export markets. 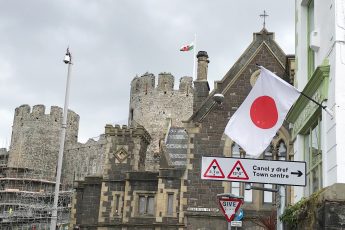 Cultural exchanges
I also saw many examples of cultural exchanges between Japan and Britain. In London, I visited the brand new Japan House on Kensington High Street, one of only three that have been established by the Japanese government—the others being in Los Angeles and Sao Paulo, Brazil. With retail, exhibition and performance spaces, plus a Japanese restaurant, it looks set to become a great showcase for Japan in Britain. Do drop in next time you’re in London.

At the National Museum of Wales in Cardiff, I had a tour of the major current Kizuna exhibition, a collaboration with Japan’s National History Museum about the links between Wales and Japan. With artefacts going back to the earliest contacts between Japan and the West in the 16th century, it is proving very popular, and visitor numbers are well ahead of expectations.

Driving into Conwy, north Wales, I was impressed to see the streets bedecked with Japanese flags, celebrating the recent twinning agreement between Conwy Castle and Himeji Castle in Hyogo Prefecture. The town council and local tourist officials told me they were already seeing a significant upswing in Japanese visitors.

While in Edinburgh, I couldn’t resist popping in to see UK-based, Japanese stand-up comedian Yuriko Kotani, who was performing in the cosy environment of a converted double-decker bus. She has some very funny takes on British life from a Japanese perspective, which you can find on YouTube. When I introduced myself afterwards, she was delighted that the British Ambassador to Japan had stopped by.

I also met a number of sporting organisations to discuss the various events taking place in Japan over the next couple of years. In London I saw British Olympic Association CEO Bill Sweeney and British Paralympic Association CEO Tim Hollingsworth. Both have made very good progress on their arrangements for Tokyo 2020.

We discussed how the British Embassy Tokyo is supporting their efforts, and how we can use the 2020 Tokyo Olympic and Paralympic Games for wider promotion of the UK.

I also dropped into the Principality Stadium in Cardiff, to discuss the Welsh Rugby Union’s plans for the 2019 Rugby World Cup with former Welsh fullback and winger Rhys Williams. He told me about their visit earlier in the month to Kitakyushu in Fukuoka Prefecture where Wales will have its pre-tournament training camp. They had carried out training for local players, coaches and referees, and received a warm welcome at the local matsuri. 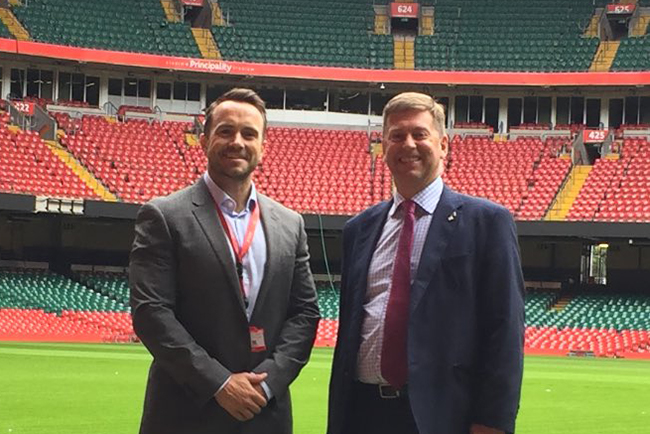 Distinguished predecessor
On my return to Japan it was straight into the annual meeting of the UK-Japan 21st Century Group, which brings together parliamentarians, business people and academics from the two countries. It is chaired by former Cabinet ministers Yasuhisa Shiozaki and Lord (Andrew) Lansley. I used to work with the latter when we were both young government officials more than 30 years ago, and we won scholarships from the Japanese government for study tours in Japan in consecutive years in the 1980s.

The group called on Cabinet Secretary Yoshihide Suga, and attended a reception hosted by Foreign Minister Taro Kono, before heading down to Kamakura in Kanagawa Prefecture for its meeting. We discussed a wide-range of economic, security and cultural issues. Unsurprisingly there was a very large measure of agreement about the nature of the challenges and opportunities which both countries face in these uncertain times, and about how we could work together to tackle them.

David Fitton, who some of you may remember as a former minister at the British Embassy Tokyo, has just become secretary of the group on retirement from the Foreign & Commonwealth Office, following his posting as High Commissioner in Jamaica.

Finally, last month we lost a great friend of Japan with the death of Sir Hugh Cortazzi at the age of 94. I have always seen him as the most distinguished of my predecessors as British Ambassador to Japan in the modern age. I think we have all benefited from the many popular and scholarly books on Japan which he wrote during his long retirement. I was corresponding with him about the draft of his latest book only a couple of months ago. RIP Sir Hugh.