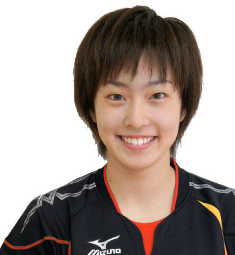 Bubbly teenage lefty is one of the youngest Olympians

The last time that Kasumi Ishikawa competed in London, a bee spiralled down from the ceiling and landed on the table tennis table. The bee’s unscheduled appearance—until it was removed by a referee—was a positive omen, however, as the bubbly 19-year-old went on to win the Under-21 Singles title.

She also made the last eight of the overall singles competition and was runner-up in the 2011 International Table Tennis Federation Pro Tour Grand Finals doubles competition, staged last November at the ExCeL Arena, near London City Airport. The exhibition and conference centre is one of the venues for this summer’s London 2012 Olympic and Paralympic Games.

And when Ishikawa returns to London in July, she fully intends to improve on those results.

“I first started playing when I was seven years old, and that was because my mother and father both liked to play back then as well”, she said. “It was their hobby, but they also played competitively.

“They don’t compete any more, but my mother, Kumi, is now my full-time coach”.

Ishikawa—who seems to have as much energy in an interview as on the table tennis court—says it felt “completely natural” to start playing table tennis at a very young age.

Her first tournament was also at the tender age of seven. Twelve years later, she is ranked sixth in the world and is the number-one player in Japan. Just outside the top 10 is Ai Fukuhara, who became something of a celebrity after being promoted by the Japanese media as a child prodigy in the sport.

Ishikawa—four years younger than her main domestic competitor, whom she beat in the final of the National Championships in January, when the two players last crossed paddles—insists Fukuhara is both a friend and a rival.

A bigger threat to her Olympic ambitions comes from the Chinese, who hold the top four places in the International Table Tennis Federation (ITTF) rankings for women.

“I will have to be at the top of my game in London”, said Ishikawa.

Four months ahead of the biggest UK sporting event in decades, Ishikawa was locked in intensive training to hone her natural abilities.

“Right now, I’m working on the weaker areas of my game so that I can get rid of the unforced errors”, she said, adding that much of that focus is being put into her returns to make sure the balls go precisely where she wants them to go.

Under the watchful eye of her mother, she is training six hours a day virtually every day. Part of that training involves tactics, but there is also a daily regimen of exercise that is designed to make her physically more resilient and to build her inner-muscle strength and stamina to a peak for the tournament.

Despite it not being a contact sport, table tennis players are also susceptible to injuries. The most common are to the ankles—which take a lot of stress due to the speed at which players are required to change direction on the court—as well as the knees and lower back.

Renowned for her aggression on the court, Ishikawa also hopes that her strong serves will give her an advantage.

“Camouflaging your serves is part of the game and there are lots of different ways to serve, so I am working on a few new ones for the Olympics”, she admitted. More than that, she will not reveal.

It is also something of a minor advantage that she is a left-handed player and has feet that move like lightning.

Table tennis has come a long way from its origins in the late 19th century, when it developed as an after-dinner game played by upper-class English families. Today, it has evolved to blend power, speed, skill and subtlety, and has become the biggest participation sport in the world.

About 172 athletes will be competing in the four medal events in London. Remarkably, the sport only joined the Olympic programme in 1988, since when China has won 20 of the 24 available gold medals.

“I’ve competed in London twice before and it has always been good to me”, Ishikawa said. “The first time I was there, I beat one of China’s strongest players; the last time, I played at the Olympic stadium and got a good result.

“I’m hoping that all the hard work is going to pay off now, and that I’ll come home with the gold medal”.