For Fulvio Guarneri, president and chief executive of Unilever Japan, growth is of the essence.

Since taking up his new position in August, Guarneri has spent a couple of months getting a feel for both the market and the firm’s position in the consumer goods sector here. Much time has also been taken getting to know his employees and settling in with his family.

With that achieved, he is now focused on injecting a new momentum for sustainable growth into the London- and Rotterdam-based business’s operations in Japan.

“I’m very excited”, said 43-year-old Guarneri, who is originally from Cremona in northern Italy. “This is my first role as a general manager, and this is a very nice country to be given to lead. The people we have here are excellent, and the market has solid fundamentals”.

Unilever can trace its roots back to 1884, when Lord William Hesketh Lever started producing Sunlight Soap to “make cleanness commonplace”. Lever Brothers was one of the few firms of the day to care about its workforce, investing profits back into the model village of Port Sunlight, on the Wirral in Cheshire, where the factory was located.

Today, the Anglo-Dutch business is one of the world’s leading consumer goods firms, serving consumers in 190 countries with recognisable brands such as Lipton, Lux, Dove, Knorr and Axe (known as Lynx in the UK).

Building on its heritage, it is now committed to “double the size of business while reducing its environmental footprint and increasing its positive impact”.

In line with this global vision, Unilever in Japan is focused on achieving profitable growth and delivering its Sustainable Living Plan. 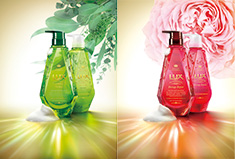 Unilever’s brand Lux was extended to hair-care products in Japan in 1989.

Since starting operations in 1964, Unilever has had success in Japan. The classic British soap brand Lux, for example, had its use extended to hair-care products in 1989, ahead of other countries, and soon won the hearts of Japanese women.

Even after a 25-year history, Lux continues to grow its share of the market, with further branding and innovation, such as Lux Luminique, launched in September 2014.

In sustainability terms too, Unilever in Japan is a leading light for businesses. Since the end of 2012, 100% of the palm oil used in its personal care products and 100% of tea in Lipton Yellow Label in Japan has been purchased from sustainable sources.

“I see Japan as a land of opportunity”, Guarneri said. “In a sense, this is already a mature market. On the other hand we might only consider it to be mature when we have a 90% share of that market.

“We’re not there yet, so we have more room to grow”, he added.

Guarneri is confident that there is even more that could be done to raise the profile and sales of Unilever in this market.

“What I like in business is speed, and I think that we’re just not quite up to the speed we need to be at here. We are working on this at the leadership level, and we’re instilling a winning mind-set in our people here”, he said.

As a big fan of sport—particularly football—he draws an analogy between business and the national pastime of both Britain and Italy.

“It’s the perfect embodiment of what business should be”, he said, ticking the points off on his fingers. “You have to be competitive. For that, you have to have a winning mindset, train yourself, and improve every day. Also, you have to have respect for competitors, and compete fairly.

“At the moment, I would say that the key challenge is the mind-set of winning”, he said. “That is something that we have to bring into the company: the certainty that we are going to win”.

Guarneri is bringing to Japan skills and knowledge that he developed during his two previous postings with the firm, both of which provided substantial challenges.

After joining Unilever in 1997 as a management trainee focusing on sales, in 2007 he was asked to take over the position of foods marketing director for eight countries in the Balkans, and was based in Bucharest, Romania.

The local unit there was not performing or developing when he arrived, but within four years, he had turned it around, launched a new ice cream range, and the business was growing rapidly.

In 2011, Guarneri was given the similarly tough task of taking over the firm’s Home & Personal Care marketing, with responsibility for the Russia business, based in Moscow.

“It was difficult, and doing business there is complicated, but it was also very rewarding”, he said. “We launched five new brands and acquired a market-leading company. I could not be doing what I’m doing here without that experience of Russia”.

Japan contains a whole new set of challenges, not least because of the fierce competition in such a developed market, the complexities of the retail possibilities—from convenience stores to high-end department stores—and the fact that consumers place such a high premium on quality.

“That last [factor] is very important”, he added. “You cannot cheat a Japanese consumer; if you launch a product here that is not perfect, they will notice. And that means this is a market that makes you very good and fit”.

Unilever places emphasis on innovation in its products, which is particularly important in a market such as Japan that is always keen on the “next big thing”. The firm has plans to substantially enhance its portfolio in the coming months. But beyond that, Guarneri is playing his cards very close to his chest.

One thing is clear though: building on the founder’s values, Unilever Japan aims to inspire the 120mn Japanese consumers of its products to take small, everyday actions that add up to a big difference for this country and the world.