Oh, they do like to be beside the seaside 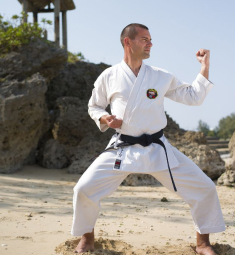 It’s a long way from the bright lights of Tokyo, but the Britons who are making their mark on the business community in Japan’s most southerly prefecture are adamant that they would not swap their beaches, balmy air and bougainvillea for all the neon in Shibuya.

And there are many advantages to living, working and raising families in Okinawa, they say.

The pump on the counter dispenses Bass Pale Ale, bottles of Baileys and Gilbey’s Gin are on the back shelves and James Pankiewicz mixes a perfect Pimm’s at the Dojo Bar. It only opened last September, but has quickly built up a loyal following in the world of martial arts.

“There are not too many Brits on the island, but those who are here do some interesting things and are invested in being connected to the local community and making the most of their lives here”, said Pankiewicz, 39, who is originally from Bridgwater in Somerset.

“Brits don’t have an accidental route to ending up in Okinawa, not like many Americans who are posted here and then stay”, he said. “For us, there’s a reason that we come here and choose to make it home”.

A graduate of the University of London’s School of Oriental and African Studies, Pankiewicz first came to Japan 15 years ago and studied in Osaka for two years, where he met his Okinawan wife, Hisano. After a decade working in information technology consulting in London, he moved to Okinawa in August 2009 and joined his in-laws’ firm.

The Jahana family is the only one still making the traditional kippan tougan sweets that were served at the court of the Ryukyu kings 300 years ago.

And while Pankiewicz enjoys cooking and says his time with the firm was rewarding, his passion is karate.

“Okinawa has a rich culture, particularly in the area of arts such as dance and karate. But it is not always accessible”, he said. “I wanted to make a place where people who wanted to could find elements of Okinawan culture—and it helps that a lot of karate sensei also like to come here to drink, so we can bring them and interested people together”.

The Dojo Bar has become a meeting place for homegrown experts and visitors drawn to the birthplace of the discipline.

“The karate community around the world is huge—it numbers in the millions—and many of the most dedicated come to Okinawa to learn from the best”. 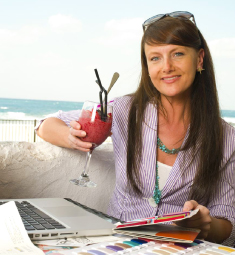 And demand is growing for Pankiewicz to act as a link between Okinawa and the rest of the world, with the bar’s Facebook page expanding rapidly, word-of-mouth recommendations helping to establish the name, and visitors requesting trips to such destinations as the Orion beer factory in the north of the island.

But Pankiewicz makes sure that he puts in his own karate training three or four times a week. A black belt in several styles of karate, he has also started training in kabudo, the use of traditional Okinawan weapons, including truncheons and staffs—some of which decorate the walls of the bar.

“And no matter how much I train and how good I get, I know that there is always going to be someone on Okinawa who has been doing it longer and is better at it than me”, he said.

Encouraged by the steady growth in the popularity of the bar—combined with the realisation that the island’s nightlife lacks more than a little energy—Pankiewicz has teamed up with fellow Briton Louise Miura to plan an ongoing series of high profile parties that will inject some pizzazz into the social scene.

“I have lots of friends and associates who are in business and I speak at women’s meetings and so on, but there’s a lack of networking here and I’m a skilled match-maker”, said Miura, 46, who was born in Hampstead but moved around Britain before coming to Japan 14 years ago.

“It’s satisfying to see a productive outcome when I connect people who, with their ideas and vision, complement each other”, she said.

Lacking any sort of regular events that draw together Okinawa’s entrepreneurs, artists and small businesses, Miura is orchestrating up-market, themed parties, the first of which will be in July.

In true British fashion, one of the offerings will be a James Bond Martini Party, where guests are expected to come dressed to the hilt and enjoy a 007-themed entertainment montage, suave drinks—including the agent’s favourite tipple—and British music. 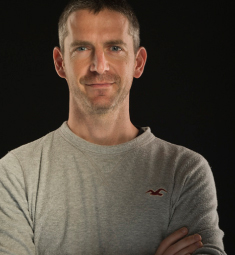 Also in the pipeline is a Miami Skyline Pool Party, in homage to the Miami Vice television show—with over-sized suits and 1980s music—and a separate event designed to showcase modern Okinawan talent.

“This is a fantastic island for the arts, but it’s a shame that not many people know about that side of Okinawa”, she said. “We hope to offer something special, attract people from all backgrounds and encourage networking”.

Miura has lived in Okinawa with her 11-year-old daughter since June 2010, working as a ghostwriter, business consultant and event organiser.

“We are both sea lovers and I just wanted this lifestyle for my hippy daughter”, she said. “We used to live in wonderful Kichijoji, Tokyo, but it has become over-crowded and too popular.

“The community we are in now is very supportive, laid-back and relaxed and, in many ways, very old-fashioned.”

Another member of the close-knit UK-born community is photographer Chris Willson, who is originally from Sale, near Manchester, and has been in Japan since March 1999.

Having spent his first two years in Niigata and Hokkaido, 36-year-old Willson decided he would rather be able to go scuba diving at weekends, and so decided to move to a place renowned for easy living.

“There’s a nice international community here and I have friends from all over the world. I don’t think you often get that sort of network if you live in other parts of Japan”, said Willson, who studied ecology at Lancaster University and in Canada.

A lecturer at two universities on the island, he travels throughout Okinawa and the rest of Japan on photographic assignments for magazines and newspapers.

“I’ve become more of a specialist in travel photography and it is only with time in the country that you are able to understand the language and, more importantly, the culture as well.

“Being able to speak with, for example, a priest at a festival and build trust enables me to get up close to take portrait photographs that would be impossible if I didn’t have that connection”, he said.

Dealing with commissioning editors can be “a challenge”, he admits, but the key is to develop multiple income sources, including a selection of stock images and prints that one can sell.

Willson’s ongoing project is also something of a collaboration with Pankiewicz, since he shoots portraits of all the karate masters on Okinawa. Most are face shots and images of these expert practitioners of the art assuming a karate stance. But one of Willson’s most striking images is of the battered and calloused knuckles of a local sensei.