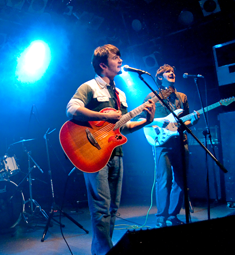 The Watanabes’ music is British-influenced pop rock with lyrics inspired by Japan experiences.

Expat bands from all over Britain enjoy firm following here


In bars, live houses and recording studios around Tokyo, musicians from across the UK are demonstrating that Britons really do have talent.

Expat musicians have banded together to perform their own songs in genres that range from country and rock to folk, reggae, bluegrass and more. Many are building up a dedicated following, regularly releasing CDs and even finding commercial success with their music being featured on television.

One of the biggest names on the live circuit here are The Watanabes, so named because it is a common surname in the wilds of Ehime Prefecture, where brothers Selwyn and Duncan Walsh originally taught on the JET programme.

“We chose The Watanabes because we wanted to ingratiate ourselves with the locals, while alluding to one of our favourite bands, The Smiths”, Duncan Walsh told BCCJ ACUMEN.

Originally from Norfolk, the brothers have teamed up with bassist Ayumi Sato and drummer Yoko Osawa on stage, and work with Glaswegian music producer David Naughton.

Walsh describes the band’s sound as British-influenced pop rock “with lyrics often inspired by our experiences in Japan”.

“[The music] is pretty mellow, and a bit folky at times”, Walsh said. “We grew up listening to Brit-pop and bands such as Belle & Sebastian and The Smiths, but when our parents weren’t listening to Radio 4, they had 60s legends on the stereo: The Beatles, Cat Stevens, Simon and Garfunkel. I think it rubbed off on us”.

The Watanabes play two or three times a month at various Tokyo venues and have also gone on tour to cities around the country, but admit it’s tough to make a living out of live music.

“It’s very difficult for an indie band such as ourselves to be much of a money-spinner”, he revealed. “Obviously we make money from record sales, downloads and live events but all of it is put back into the band.

“My brother and I are currently sharing a room in a bid to finance our next record”, he said. “During the daytime, we teach in Japanese elementary and junior high schools. It’s a fun job and the money comes in handy”.

While the band has had successes, the Walshes are hopeful that a rising profile will lead to more. One of their tracks was recently used for a Triumph Motorcycles television campaign, and “Whales Can Sing”, inspired by the award-winning documentary The Cove, has been adopted by environmental campaigner Ric O’Barry. In addition, the band have appeared on Nihon TV’s Zoom in Saturday programme.

The band is currently working on a new EP, but the goal remains the same: to reach as many ears as possible.

“We’d love to get on a movie soundtrack or play at a big festival, both of which are obtainable with a little bit of effort and persistence”, Walsh said. “That’s what it’s all about”. 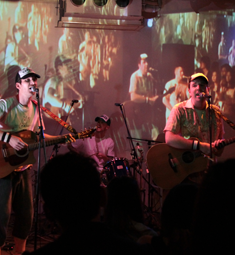 Jimmy Binks and the Shakehorns have recently released their first album.

Arguably the oddest-named band currently doing the rounds in Tokyo is Jimmy Binks and the Shakehorns, a five-piece outfit that performs a fusion of country, rock and folk, with roots in what vocalist Sam Berry believes is best described as “alt-country”.

“The band’s name is a long and not particularly fascinating story, but is basically the result of having to decide a name on the spot while on the phone to a venue, a little bit of gentle bullying by a friend similar to the annoying Star Wars character Jar Jar Binks, and an accidental nod of respect to a 1950s Yorkshire wicket keeper”, Berry admitted.

A shakehorn is a plastic acorn-shaped shaker percussion instrument that the band uses as often as possible.

Brought up in South Yorkshire’s Sheffield, and in Wales, Berry shares most of the songwriting with Julian Peters, who is originally from Cambridge. Saxophonist Tim Marchand is from Kent and drummer Darren Scaife hails from Blackpool. Yuki Shiroma, on bass, rounds out the line-up.

“The level of dedication [in Japan] is really impressive”, said Berry. “Even at an amateur level, people can really play their instruments.

“Even kids on the street put the time in and have incredible equipment”, he added. “Live houses and studios generally have excellent equipment, too, and there are lots of places to play in Tokyo.

“You might not often get paid, but there are always places to play if you want to”.

In late 2010, the band released a demo CD online. Recently, they brought out their first EP, titled Not Too Late, which was recorded at a Kichijoji studio and at the flat Berry and Peters share in Shinjuku, before being mixed and mastered at Aquarium, a Cambridge-based music studio.

Several Jimmy Binks songs were used in the trailer for the indie film Let Go, while the track “Such a Smile” was featured in the prime-time NBC sitcom The New Normal. BBC Radio Wales has also played the track “Half the Time” from their new album.

“We’ve just released our new EP, which we hope will open a few more doors”, said Berry. “For me, I’d love to do a little tour and play some new places in other cities. Also, I believe that we would be a great band to watch outdoors, so we would love to play at a festival”.

Another British-rooted staple of the scene here is Kinlay, a four-piece band fronted by Manchester-born Andy MacKinlay.

“I used to run about four jam sessions per week at various venues around town back in 2003 and 2004 and I picked up the best musicians to start playing at bars in the city”, he said. Regular venues for the reggae-inspired performances included the Rock Factory in Roppongi, The Fiddler in Takadanobaba, and What the Dickens in Ebisu—which still hosts a monthly jam session on the first Tuesday of every month.

Influences range from Dr. Dre and Radiohead, to Femi Kuti and Amy Winehouse, and to date the band has released three CDs.

The most recent is Golden Zero, comprising seven original tracks written by MacKinlay and recorded at the KRH Studios in Harajuku.

Performing in front of audiences in Japan can be “frustrating if you are looking for energy from the crowd”, MacKinlay revealed, although it can be different in Osaka, Hiroshima and other cities around the country.

He has words of praise for the many bands who perform live in Tokyo—suggesting there is an alternative to being force-fed AKB48 or the latest manufactured hit.

“Back home there is music you like and relate to—I was an ‘indie kid’ but loved American rock—and don’t like”, he added.
“Maybe as you hear more, you can appreciate different [types of] music, but when you are a kid, you either love it or hate it—no moderation”.

MacKinlay’s ambition is to continue to create good music and progress to bigger shows and venues. Just like the other bands, it’s all about being heard.