An award-winning British designer has been chosen to design Tokyo’s most ambitious redevelopment project since Roppongi Hills opened in 2003. ACUMEN was invited to interview Thomas Heatherwick CBE, RDI, HonFREng at Mori Building Co. Ltd.’s groundbreaking ceremony for its 81,000m2 Toranomon–Azabudai Project ahead of the official press conference on 22 August. The design will dramat­ically change the face of the prime commercial and residential area around Kamiyacho and Roppongi Itchome Stations with space for offices, accommodation, shops, a hotel and an international school. 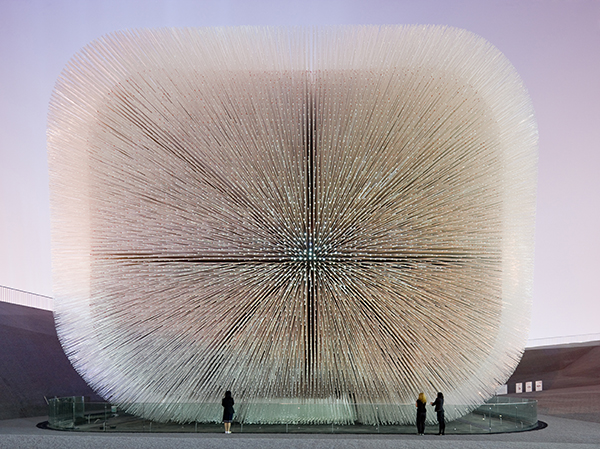 Perhaps the most prominent British designer of his generation, Heatherwick had already made a name for himself within a few years of graduating from the Royal College of Art in 1994. The same year, he founded his own firm, Heatherwick Studio, and by the mid-2000s was designing everything from public art projects to a bridge that could roll up into an octagon.

Many of Heatherwick Studio’s most promi­nent projects have been closely linked to Britain’s national identity, such as the UK Pavilion at Shanghai Expo 2010, the cauldron for the London 2012 Olympic and Paralympic Games and London’s New Routemaster bus.

The studio also has completed projects around the world. These include the Learning Hub at Singapore’s Nanyang Technological University and the Bund Finance Centre in Shanghai—a 50/50 collaboration with Foster & Partners. Currently, the studio is working in partner­ship with the Bjarke Ingels Group to design Google LLC’s new headquarters in Mountain View, California, and King’s Cross, London.

Despite this global reach, Heatherwick Studio didn’t have any projects in Japan—until now. The project will spread across three main towers and a number of smaller buildings. Heatherwick Studio is responsible for the land­scape design of the entire project, including the 6,000m2 central plaza, as well as the design of several iconic structures.

ACUMEN spoke with Heatherwick about the incredible growth of his busi­ness, one of his most high-profile endeavours and the impression he wants to make with his first project in Japan. 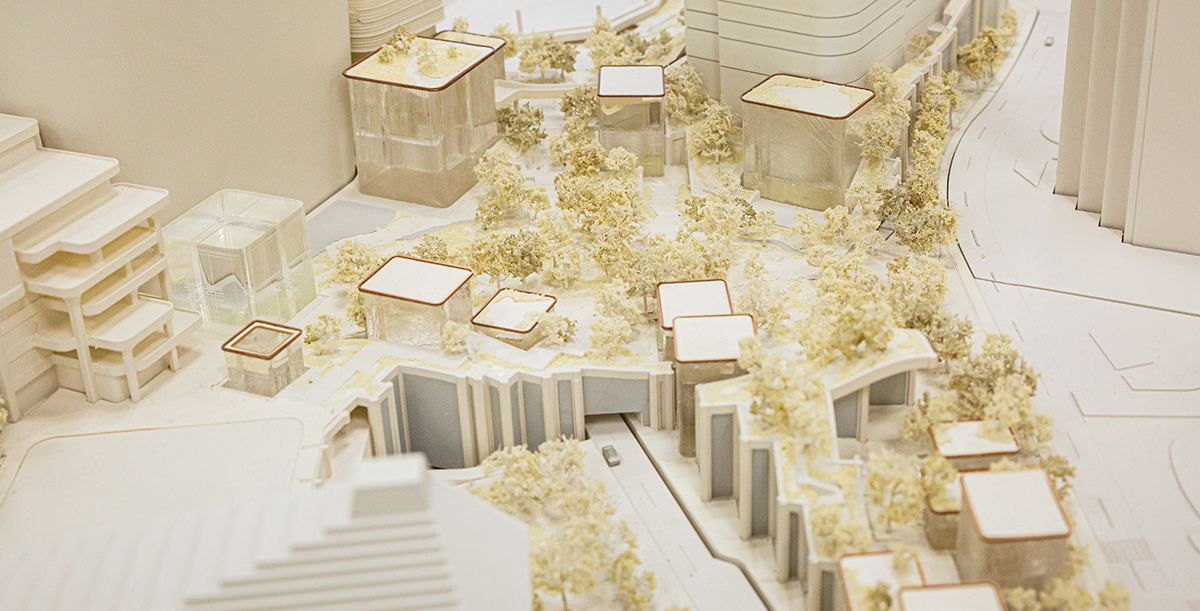 Thomas Heatherwick was born in London in 1970. His grandfather was the son of the owner of Jaeger, the leading London fashion firm, and his uncle was the journalist Nicholas Tomalin. He attended the private Sevenoaks School in Kent, and studied three-dimensional design at Manchester Polytechnic and the Royal College of Art. After graduating and founding Heatherwick Studio in 1994, his mentor, Terence Conran, asked him to make an interior display which led to his first public commission, for the 1997 London Fashion Week at the Harvey Nichols department store.

Why did you become a designer?

I think that, in a way, all children are designers. All children are making things, and doing things, and I’m just an extension of that child who’s carried on. The studio, in a way, is like a very large version of my bedroom that I had when I was seven years old. And I was curious and interested in what was possible—that’s, in a way, a trait of children. It’s also really important when you’re designing at the scale of the city. Unless you’re curious about why things are like they are—How do they come to be like that? What does it take to make something happen?—you can’t do what we do.

As a child, I remember wondering why so many places I went to were so badly designed, and you just thought, Why is that like that? Why did they do that? But that criticism is a motivator because you then think, well, if you just did this and that it would be better. Criticism leads to ideas, I find. Those thoughts I had when I was little have, in a way, translated into and grown with a great group of collaborators into a system—or a way of developing design ideas in our studio—for very different contexts, whether that’s transport infrastructure or pieces of city or particular buildings or even products and parts of buildings.

How do you build a creative business with such longevity?

When I set up the studio—it was 25 years ago, actually, this month—I think that I never set out to build the business at all. I was interested in trying to make things better, and I knew there was a gap that I felt somebody needed to address, and I didn’t know who else to work for. I’m genuinely astonished to now have 220 people in my team. That wasn’t the goal, and I don’t think of it as a business. And I think that might be the key. When people’s motivation is business, I think that you’re immediately less relevant. But when you have a purpose—and that purpose drives you—you have to be a business in order to do that purpose. But that’s just a necessity that you then have to learn. It took me a long time to find great team members and to figure out how to do that. In a sense, my studio has been the biggest project of the past 25 years.

What were your goals for the London 2012 cauldron? 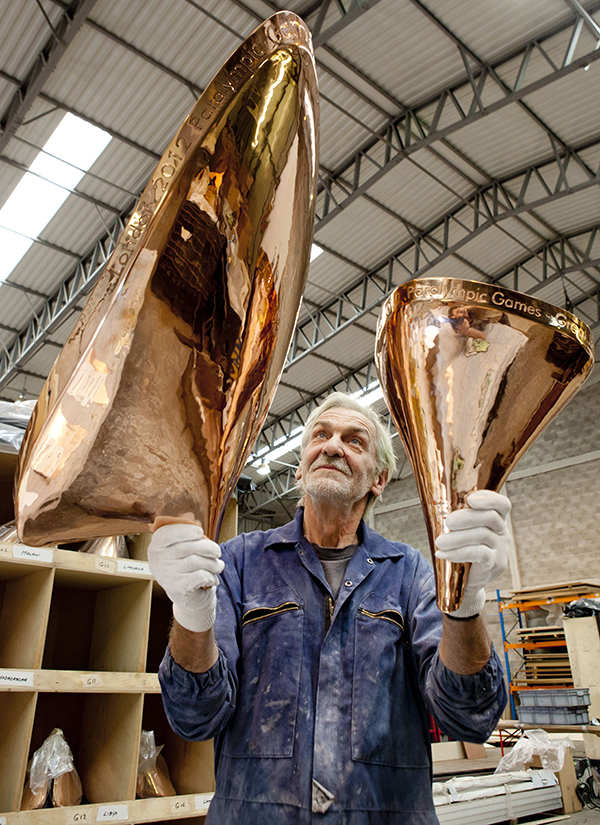 It’s exciting to be talking about the Olympic cauldron here in Tokyo when the Games are just one year from now. We were very honoured to be asked to do this important part of the opening ceremony. But we were there thinking this funny moment where we would design something that was going to be seen by a billion people at the same moment. How do you really connect with those people? And when we looked back at many previous Olympic cauldrons, if you ask some­one, Do you remember any Olympic cauldron?, most people would say no. But they do remember how they were lit.

What we realised was that it’s actually a moment. It’s not a thing. It’s a moment. Reflecting on the Olympics, one thing that I find really powerful about them is that we’re so used to, in the media, the feeling that the whole world is always arguing with each other and there’s always some trouble between this region and that region. And now it’s no different. But then, during the Olympics, there’s this moment where everyone stops arguing for two weeks and then they carry on arguing afterwards.

We thought about how we could reflect the beauty of 204 countries coming together and not arguing for two weeks. So, we thought, what if our cauldron is gone afterwards? And I just thought, oh, what if every country brings a piece and we’d collaborate for two weeks on making an Olympic cauldron. And then, at the end of that two weeks, each country takes away that piece and takes it back. So, somewhere here in Tokyo now is the piece of the London 2012 Olympic cauldron at the Japanese Olympic Committee, and there’s an Olympic Committee in all the main countries that go into the Olympics. Ours had the most moving parts in the history of all Olympic cauldrons. It had a thousand moving parts. We focused on an invention. Could you make a cauldron out of 204 cauldrons? That was the idea. It felt like it was some sort of poetic relationship to what was happening in a sporting context.

Tokyo has many iconic buildings. Do you have a favourite one?

I think my honest favourite thing is the small houses. I mean, in London, there are not so many special houses. Here people take tiny sites and put all their imagination into them. You feel imagination popping up in these different projects that are done.

And I cherish that. I think that, in the US certainly, everyone assumes you must have big, big opportu­nities to test ideas. But, in Japan, you cram in and make magic in a tiny space. That’s very educa­tional as well. It really makes you feel encouraged. This trip is reminding me to always work harder, because it’s easy for projects to become too big and too stretched. If you can make magic in a space that size, it should be possible to make 10 times that in 10 times the space.

I feel a huge respect and interest and curiosity [for Japan]. One other thing that this project offers is a chance for that legendary craftsmanship to be something that my studio works with. And we’ve tried to think of that. You also design differently for available craftsmanship. In some parts of the world, the craftsmanship is just not there. So, you mustn’t design the same kind of thing. You have to design the materials, the tools, the things that will come together to be able to look good, badly made. But this is amazing to be able to say here that we know the craftsmanship will be exceptional. So, it’s trying to get the balance right so that there’s a harmony between the craftsmanship, the design ideas and the expectation of detail that we put in to the smallest scale as well as the biggest scale.

What experience do you want people to have in Toranomon-Azabudai?

The heart of the project is a focus on creating a garden—an intimate garden. We didn’t want to have the normal relationship of building and garden around the edge, and it seemed that was the opportunity: to combine garden and building together. The step that really has driven this was exploring trellises. In gardens, you sometimes get these structures that are a lattice and the plants grow up and over those, and they have a square grid. It occurred to us that we could make a rational, practical grid that could work for shopping, for places for people to live and work. It could also then become this planted trellis that could undulate and make garden and building blur together and simultaneously make public space blur together with buildings. What is a roof and what is public space could be more ambiguous.

So, we hope that there will be more room to explore and discover, because we haven’t taken such a black-and-white approach to what is building and what is nature. We’re going for a variety of experiences. The lovely thing about this site is the height difference. There are more than a few stories between the lowest part and the highest parts, which means that, rather than there being a hills project, we wanted to amplify the valley. I hope that this sense of indoors and outdoors will be special. And we hope that there’ll be nowhere else like this. We believe that we’re offering something that’s precious in Tokyo—precious in many, many parts of the world—but extra special and magical because we’re having the chance to make it here.