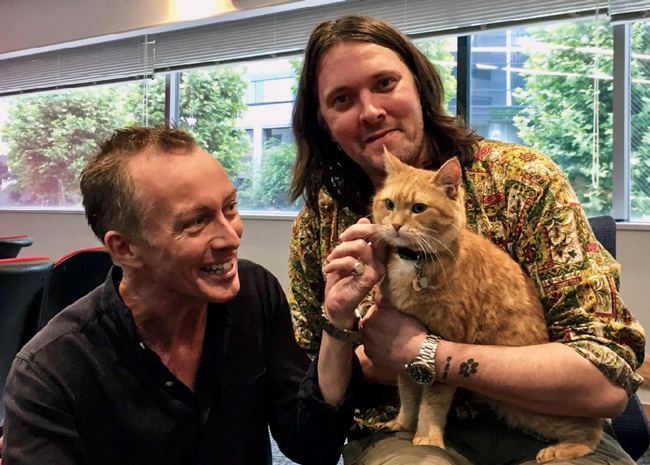 Guy Perryman MBE with Jim Bowen and Bob in Tokyo

In more than 30 years of broadcasting, I have interviewed hundreds, possibly thousands of people, but I had never interviewed a cat. Until now. Bob the Cat has come a long way, from unknown beginnings in London to being a global star of book and screen.

His owner, or rather best pal and biographer, James Bowen, has also come a long way—literally and figuratively—from homeless drug user in London to multi-million selling author travelling the world to promote his book A Street Cat Named Bob, and now its film adaptation.

I met the two of them at the Sony Pictures office in Tokyo in July to discuss their lives, the book and the film. The three of us settled in close to one another at a desk, Bowen and I sitting on chairs, with Bob sitting on the desk so he could participate at eye level.

Streets of London
Bowen’s story starts on the mean streets of London, where he was homeless and addicted to heroin. He then enrolled in a methadone programme and lived in assisted housing. Bob literally walked into his life injured, homeless and also in need of assistance. This was the trigger for Bowen to clean up his act and take care of not just his cat, but himself. The two of them came to be inseparable, and Bob became part of Bowen’s life across London busking and selling The Big Issue.

An article about the pair in the local Islington Tribune newspaper brought them to the attention of a literary agent, and A Street Cat Named Bob was born. The book is now a film starring English actor and singer Luke Treadaway as Bowen, and Bob starring as himself.

Apparently, seven trained cats were flown from Vancouver to London for the film shoot, but while Bowen and Bob were on set to consult at the start of filming, the director realised Bob was better than the “professional” cat actors, so Bob took on his own role.

And is Bob vain? “He certainly knows what a camera is”, Bowen said. “As soon as he sees a camera, he starts doing cutesy stuff, and he watches himself on the playback monitor”.

He is also inquisitive, friendly and has a healthy appetite, as does Bowen these days. While on their press junket in Tokyo, the pair were planning on taking in the sights, and in particular Tsukiji fish market. I thought that was brilliant—talk about pussycat heaven. That adventure could be a film in itself!

He admits the film was produced with a family audience in mind because a children’s adaptation of his book has been a huge part of the overall success of his story, bringing combined sales of the books to over 10mn.

Making a change
I wondered what it is like telling the world such a private tale. “People take so much away from my personal story”, said Bowen. “It’s about redemption, it’s about people looking past just what they see”.

Bowen believes the general public lump all homeless people into one group: “They are all tarred with the same brush”. He admits having a cat made him more accessible and, with a cheeky smile, credits Bob for “being a wonderful catalyst for change”.

Life on the streets of London can be hostile, not just for the homeless, but also for buskers, and Bowen shares stories of the hostility from the general public, the police and also between buskers fighting for the best money-making spots. Music is a big part of Bowen’s life and the film, and he is delighted with the original soundtrack, written by Charlie Fink of British indie band Noah and the Whale and performed by Treadaway.

Today, Bowen spends most of his time fundraising for various charities, including Action on Addiction, which is part of the Charities Forum, the collection of charities of which The Duke and Duchess of Cambridge and Prince Harry are patrons. The Duchess also went to the premier of A Street Cat Named Bob in London in November 2016.

The last word went to Bob. I asked Bowen: If Bob could talk, what do you think he’d want to say?

“Where’s my dinner?” he replied with a laugh, adding, “Bob would just simply want to be a backpacker getting to know the world, trying different food. That’s Bob’s dream I expect”.

I hope he got his dream dinner at Tsukiji.