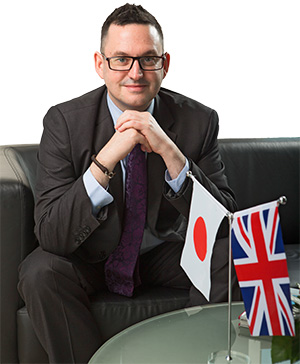 Matt Burney is Japan director of the British Council.

Whether it is in the area of culture, education, sport, diversity or Japan’s globalisation, Matt Burney is brimming with ideas.

Less than one week after taking up the post of Japan director at the British Council in September, Manchester-born Burney set out just some of his goals and ambitions for improving the cultural ties between the UK and Japan, adding that he intends to “get a lot done in the next four years”.

“In the past, Japan’s concept of internationalisation used to be primarily about bringing more foreigners to Japan, but it was never a pillar of their education system, for example”, said Burney, a member of the British Chamber of Commerce in Japan Executive Committee. “But I really feel that Japan has recently turned a corner because it has realised that internationalisation is a real opportunity for the country.

“Partners I have been talking to seem to now know that internationalisation is no longer an idea that is nice to have; it’s essential to the future development and prosperity of Japan in a region that is increasingly competitive”.

That is one area in which the British Council and Burney aim to share the UK’s experience and know-how.

A graduate of St. Anne’s College, at the University of Oxford, Burney first came to Japan in August 1992 as an assistant language teacher. Here on the Japan Exchange and Teaching Programme, he taught in a small village in Aichi Prefecture, and later worked at Aichi Shukutoku University before becoming liaison officer for central Japan for the British Council in Nagoya City.

Burney then became director of southwest China in Chongqing. Three years later, he returned to the organisation’s headquarters in London to serve as deputy regional director for East Asia. After spells in the Czech Republic and Ireland, he returned to China to serve as the director for east China, based in Shanghai, before accepting the British Council’s position in Tokyo, where he replaced Jeff Streeter.

“There is a risk of seeing the British Council as just bricks and mortar, but I want to expand what we offer beyond this building and to take our services to more partners and businesses”, he said.

A key element of that is the Leaders of English Education Project (LEEP), which the Ministry of Education, Culture, Sports, Science and Technology has commissioned the British Council to undertake for a second year.

A five-year programme designed to improve the teaching of English in primary, junior high and senior high schools across the country, LEEP is training about 650 nominated teachers this year in methods to improve language instruction. Those teachers then act as trainers in their respective regions, passing on the British Council’s expertise. This year’s goal is to provide training to 15,000 teachers.

Feedback after its first year has been overwhelmingly positive, with more than 90% of teachers saying they were keener to teach in English after attending the training.

Burney said the British Council is also eager to promote higher education opportunities that exist in the UK, and develop closer working relationships between universities in both countries.

“By bringing together high-quality higher education institutions, we can provide a platform to devise innovative solutions to some of our shared problems, ranging from environmental concerns to our ageing populations and other social issues”, Burney said.

And despite the reputation British universities have of charging high fees for overseas students, Burney insists there is still a return on the investment in a UK education. It provides access to the best workplaces and ensures that a graduate progresses more quickly in his or her career.

Statistics indicate that Japanese students agree. According to the Japan Student Services Organization, about 6,500 Japanese were studying at British universities in 2013, a 15% increase on the previous year.

Diversity and inclusion is an area that Burney said he is “passionate about”. Promoting equality in all areas is a “demonstration of British values and a great opportunity for us to show what we can do, and to eradicate discrimination”, he said.

Burney’s posting is scheduled to last for four years, which he considers fortunate; it will be during the exciting run-up to the Tokyo 2020 Olympic and Paralympic Games. However, his position is due to come to an end nine months before the opening ceremony.

“We are already working very closely with the Japanese government and relevant partners because we have so much that we can share after London hosted the Games in 2012”, Burney said.

“We are also busy developing relationships to share lessons from the 2012 Cultural Olympiad that took place across the UK, and that is obviously a big part of what we want to do in the next four years.

“The Olympic and Paralympic Games are going to be a fantastic opportunity for all of us, and a marker to see the strides the British Council has taken in that time”, he concluded.