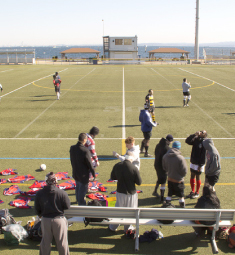 Laying out the kit at a two-day tournament in aid of the Make-a-Wish Foundation, in February at the U.S. Yokosuka Naval Base.

“Game of equals” stands for bonding, charity . . . and beer

Rugby Union has a long and distinguished history in Japan, and there are high hopes that the sport, at all levels, will experience a further boost in the run-up to Japan hosting the Rugby World Cup in 2019.

Japan will be the first Asian nation to stage the showpiece event, but amateur foreign teams are already active in spreading the gospel according to William Webb-Ellis, who in 1823 stunned players on the football pitch at his Warwickshire school by picking up the ball and running with it.

An estimated 200 players turn out for the four mainly foreign teams in and around the Kanto area: the Yokohama Country & Athletic Club, All France RC, Tokyo Gaijin and Tokyo Crusaders.

And while the sport is taken very seriously on the pitch, there’s a lot more to rugby in Japan than just tries and conversions.

“We like to provide a network for guys to meet, make friends, socialise, join rugby tours and play rugby”, said Gareth Lim, managing director of Focus Consulting Partners and a stalwart since 2008 of the Crusaders—or the Cru, as they like to be known.

“But we also want to provide a sports club where guys can keep fit, train and play a competitive sport, as well as go on to coach and develop new players”, he said.

The rugby community is also very active in charitable causes here, added Lim, and stages fundraising games. In February, the team took part in a two-day tournament, at the U.S. Yokosuka Naval Base, in aid of the Make-a-Wish Foundation. Previous events have raised cash for victims of the Asian tsunami and last year’s Great East Japan Earthquake.

Lim, 37, played schoolboy rugby in north-east England and later at the University of Leeds. Enticed back into the game after arriving in Tokyo, he said he made 30 new friends immediately.

Founded by a group of expats in 1990, the Cru can today call on players from the UK, the US, Australia, New Zealand, Canada, Scandinavia, China and Japan. Training is twice a month during the off-season, and once a week between September and December. The team plays in the Shuto League and finished third in its division last year.

Growing up in Sweden, Jonas Hult only caught the rugby bug after witnessing the world-famous Rugby Sevens tournament during a business trip to Hong Kong.

“The atmosphere, the pace, the hits and excitement all attracted me to the sport, and I haven’t been disappointed”, said Hult, 39. “In about six months since joining the Crusaders, I’ve made plenty of new friends, learned much about the game and had some great times out with fellow rugby players.

“One of the things that fascinates me about rugby is that two sides can be really competitive on the field and beat each other up for 80 minutes, then share a sento and beers after”, he said. “I’ve heard this is not particular to Japan: what happens on the field stays on the field.

“Another thing is that everyone seems of equal value once you put the jersey on”, he added. “There are no ‘stars’ on the team. 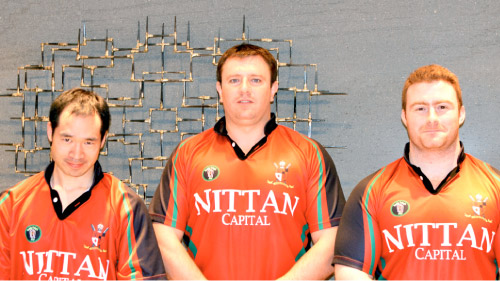 “Of course, there are players with more experience and better rugby ability, but unless everyone moves together, the team can go nowhere”, he said.

Marc Sherratt has recently moved back to Cheshire after teaching at a high school in Saitama Prefecture, but said it was the “promise of fun, adventure and really wild parties” that led him to the Cru’s door.

“The club is a great networking opportunity”, he said. “Give a little blood, sweat and some tears for a great group of guys and they will rarely steer you wrong.

The first recorded rugby match in Japan took place between British sailors in Yokohama in 1874. In 1899, Cambridge graduates Professor Edward Bramwell Clarke and Ginnosuke Tanaka introduced the game to students at Keio University. It was another 20 years before the game really caught on, but today there are more than 120,000 registered players, from grass-roots clubs through to professionals, and no fewer than 3,631 official clubs.

“Rugby is one of the most highly skilled physical sports around”, said Lim. “Played well, it is sheer elegance. It is 15 people on one pitch, each with a different role, but organising together into an amazingly well-coordinated unit.

“There is a real feeling of achievement when you win after putting your body on the line”, he said. “The feeling is like nothing else”.